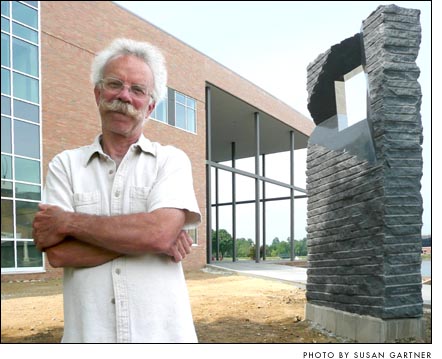 Sculptor Jon Hudson stands before his latest installation, Synchronicity X: I Am the Light of the World. The 16-foot tall, 27 ton, granite and mirror stainless steel sculpture was commissioned for the recently completed Center for Biblical and Theological Study on the campus of Cedarville University.

An artist’s inspiration can come from anywhere — the angelic face of a sleeping child, a vibrant color from a neighbor’s garden, or perhaps the unique perspective of a somersaulting motorcyclist after connecting head-on with an oncoming car.

Referred to as “in the motorcycle-free zone,” long-time villager and internationally known sculptor Jon Barlow Hudson capitalized on the inspirational opportunity of his mid-air tumble to make some mental notes for future sculpture ideas just before making contact with the ground.

“I observed myself as the hub of a wheel tumbling through this pile of rocks,” said Hudson, in an unassuming, soft-spoken demeanor that belies not only the magnitude of the accident but the breadth of his 30-plus years work. Lucky to still have his body and mental notebook intact after suffering two serious accidents, Hudson doesn’t ride motorcycles anymore. But he does continue to draw inspiration from his everyday life.

Take, for example, an ordinary drive on I-75 past a limestone quarry. Most people would see just a pile of rocks, but Hudson, who has worked in quarries in Italy, Egypt, and Wisconsin, sees the potential.

“I’m curious to see what kind of stone it is,” he explained. “[I notice] if there’s good solid blocks or if it’s all broken, if they’re quarrying with drills or are they just blasting, if it’s for architectural use or being crushed for gravel or cement.”

From 6 inches to 100 feet high, from brass to basalt, from suspended works that appear delicate and free-floating to massive structures reminiscent of Stonehenge, Hudson’s work is all over the map — literally. It would take 80 days around the world and then some to see his entire collection of commissioned public and private art. Bahrain and Brazil, Japan and Germany, Egypt and Indonesia — these countries and others are home to his international commissions. In Ohio, his work can be found in Toledo, Troy, Cleveland, Columbus, Dayton, Springfield and Bluffton.

Fortunately, villagers won’t have to travel far to see Hudson’s latest installation at Cedarville University, off State Route 72, next to the recently completed Center for Biblical and Theological Study. Titled Synchronicity X: I Am the Light of the World, the 16-foot tall, 27-ton, granite and mirror stainless steel sculpture is the tenth in a series inspired by his two death-defying, rotational travels, along with other life-shaping experiences.

“I like the idea of synchronicity,” explained Hudson. “Two unrelated events that come together at the same time. Like thinking of your mom and then she calls. [For the Cedarville sculpture], you have two pyramids that come together and when they interlock, they form a hexagon. To me that perfectly symbolizes the synchronistic moment which you could extrapolate to be the moment of enlightenment.”

Reviewing his many achievements on his Web site, http://www.hudsonsculpture.com, including the 1992 Tree of Knowledge that stands outside the Yellow Springs Public Library, one can get a sense of Hudson’s affinity for synchronicity, symmetry and balance. While receiving his master of fine arts from the California Institute of the Arts, he studied tai chi and slowly noticed a change in his work.

“The whole physical and mental process of tai chi is to center your weight, your energy, and your balance all around your mental and physical center,” said Hudson. “There’s a center in one way or another in many of my works.”

The first five years of Hudson’s life were spent in Casper, Wyo., before his family embarked on a life of international travel, eventually settling down in Yellow Springs. Carving a career from his interest in rocks, art, and travel, Hudson was largely influenced by his hydro-geologist/magician father, Ben, and weaver/writer mother, Jean Barlow — Yellow Springs’ first woman mayor.

In addition to granite, marble, steel, brass, bronze, water and wood, Hudson has also worked with a lesser-known medium.

His partner of 23 years, Debbie Henderson, is costume designer for the Wittenberg University Department of Theater and Dance. A need for authenticity when furnishing hats for student productions resulted in her writing four books and curating an exhibit on the history of men’s hats. As part of the exhibit, she called on Hudson’s expertise (and penchant for hats) to create an eye-catching sculpture which was installed in Antioch College’s Herndon Gallery in 1999 and featured 90 felt hats suspended in a cone-shaped cluster.

With the exception of hats, Hudson’s installations are made to stand the test of time. Last year, however, a complex nine-piece brass and stainless steel sculpture was destroyed and replaced with banners. Hudson was never notified and only found out after Henderson had taken a friend to see the sculpture.

“That was a huge installation,” Hudson recalled. “A huge amount of work.”

Then there was the time when a large stainless steel outdoor sculpture was run over by a truck to flatten it, then sold for scrap.

How does it feel to have such a labor of love destroyed?

“It’s like a child,” he explained. “You send it out in the world, some survive, some don’t. Hopefully enough will survive over time.”

Thankfully, the majority of Hudson’s “children” are surviving and thriving all over the world with more being added every year. Another recent work, Wind Dragon, is being installed at Olympic Park in Beijing as part of the 2008 Summer Games. He’s also been commissioned to sculpt a giant double helix in stainless steel, large enough to walk through, for the new Diggs Bioscience Building at Wright State University.

“With stainless steel,” Hudson said, “one sheet is no different than the next. Stones are like people. Each one is different with its own unique texture and color. Although [steel] is great for what it can do, the vitality is really in stone.”