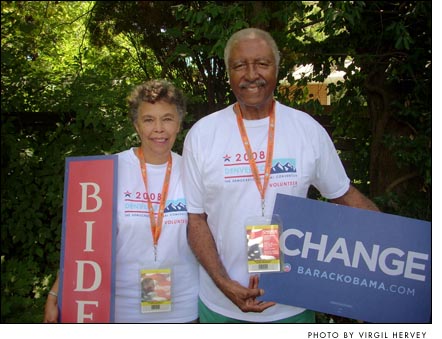 Betty and Jim Felder returned home recntly after having served as volunteers at the Democratic National Convention.

Felders are ‘somebodies’ at the Democratic convention

Short of being a delegate, how do people get to participate in such a momentous and, in this case, history making event as the recent Democratic National Convention? To local couple Jim and Betty Felder, the answer was simple — volunteer.

Interviewed shortly after their return from Denver, they were as wide-eyed as a couple of kids who just got back from Disney World.

“The atmosphere was electric,” Betty Felder said. “There were people there from all over the world.”

According to Jim Felder, they were inspired to go to the convention after they heard Barack Obama speak at Jim’s alma mater, Claflin University, while they were wintering in South Carolina. But they didn’t realize the magnitude of the event until they encountered a parking nightmare and long lines outside the fieldhouse.

“He hadn’t announced yet,” Jim said, “But everybody knew he was about to toss his hat in. After that, we knew that one way or another history was going to be made at the convention. It was either going to be the first black man or the first woman to be nominated.”

Shortly after hearing Obama speak, Jim’s niece suggested that they all go to the convention. That was in March. Before they knew if it was even possible, the Felders made hotel reservations in Denver. Then they went on the DNC Web site and found that they could volunteer online.

As registered volunteers, they received weekly e-mail updates in the buildup to the convention. As the convention got closer, the bulletins started coming in daily. The Felders received several invitations to come to Denver in the weeks before the convention, but could not make it. Finally, they got the big invite. They were to show up at the Tabor Center in Denver for the on-call volunteer pool on Monday, Aug. 25, the first day of the convention. They were told they were going to be part of a force of 21,000 volunteers.

When the Felders arrived in Denver, they called transplanted Yellow Springer Ruth McKinney, daughter of Alice McKinney, whom they knew when she was growing up in the First Presbyterian Church. She helped them negotiate the difficult and security-restricted trip from their hotel to the Tabor Center in downtown, where they were issued shirts and badges identifying them as volunteers and asked to wait for an assignment.

When they got tired of waiting, Jim managed to finagle an assignment. They were sent to a corner on the landmark 16th Street Mall, a pedestrian mall that runs through most of the downtown, and told to hand out maps of the city to passersby. Jim, gregarious by nature, was in his element, Betty said. With kind words and a joke here and there, he soon attracted the attention of a reporter from Minnesota Public Radio. Before he knew it, he was being interviewed. He would be interviewed two more times before the trip was over.

As a distinguished-looking black man attending a convention that was about to nominate the first black candidate of a major party, “they thought I was somebody,” Felder laughed. “But I was really nobody.”

From their vantage point as the day progressed, the Felders would meet all sorts of celebrities and politically connected people. Soon they were being treated like insiders with an invitation to an elegant private party where they met more notables.

On the second day, unable to get credentials from the Ohio delegation to get into the Pepsi Center where the convention was being held, they settled for handing out maps outside the building. There they met Martin Luther King III, who was kind enough to pose for a photo with them. They also met some very friendly members of the Georgia delegation who invited them to another party.

On Wednesday they took the day off to go sightseeing in the mountains.

Thursday, the convention moved to Invesco Field, which had been set up to accommodate 84,000 people for Obama’s acceptance speech. Determined to get in, the Felders went to the Westin Hotel, where the DNC had set up headquarters, to see if they could get credentials. They were lucky enough to get on a waiting list for standby tickets and told to wait until afternoon. With credentials in hand, they rushed to the stadium, where they waited in line for two hours to pass through security in order to enter.

“Thousands of people didn’t get in,” Jim said.

They made it through in time to hear the speech from seats that were close to the floor. In the process they met more celebrities and notable politicians, including a reporter from Ireland, who interviewed Jim after they got back from the speech.

“There were 15,000 reporters from around the world rooting for Obama,” Jim said. “Three of them managed to find me.”

During the four days at the convention, they met people from all over the world. Betty met a Russian woman who had come to Denver with no hope of getting into the convention, just to be there for the momentous occasion. Jim met a man from Korea who told him, “The world needs Obama.”

“The local people were great,” Jim said. “They would see our volunteer shirts and offer their help from out of the blue.”

Jim’s Minnesota Public Radio interview can be accessed on the Internet by going to http://minnesota.publicradio.org and typing “Jim Felder” into the search bar.