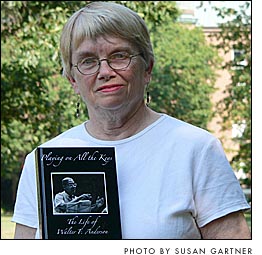 Writers employ a wide variety of techniques to help them stay on task, such as scheduling a set time each day for writing or writing about writer’s block. For first-time author Joan Horn, the pressure to work on her book came from a technique not typically found in a writer’s guide.

“The writing dragged on and on because I was living my life in a very full sense, traveling to Brazil and doing other things,” said Horn. “I wrote when the spirit moved me.” But when Horn heard that the subject of her book was in a nursing home and not doing well, her motivation to work on and finish the biography kicked into high gear.

Walter F. (Andy) Anderson was a child prodigy in piano and organ, a composer, and the head of the Antioch College music department from 1946 to 1965. He was the first African-American in the country to head a department at a non-black college.

“He was a professor of mine,” said Horn of her long-time friend and mentor. “I had a co-op job as his assistant scheduling piano lessons for him and booking various music groups that were coming to the college to play. I took organ lessons from him my senior year and then we kept in touch.”

Following his career at Antioch, Anderson was director of music programs at the National Endowment for the Arts in Washington, D.C., from 1966 to 1983.

“Every time I’d visit friends in Washington, I’d look him up and we’d go out for dinner,” said Horn. On one of those visits, Horn learned of a woman who was in the process of writing a book about Anderson. “Unfortunately, she died before she had a chance to write anything but she did leave her notes with Andy,” said Horn.

Horn asked Anderson if she could take the notes back to Yellow Springs and find a writer to finish the job. When the writer didn’t materialize, the former director of the Glen Helen Outdoor Education Center decided to write the book herself. In her research, Horn spoke with at least 100 people. She visited Anderson’s son in Florida and his ex-wife and daughter in the Cleveland area, along with friends and colleagues in New York and D.C. When she learned about his declining health, she immediately went to his side.

“Over the course of four days,” said Horn, “I read to him the first four chapters of the book. He was definitely with it and could laugh at the funny parts and even supplied some names of people I hadn’t included in the book.” After reading the work-in-progress to Anderson in the nursing home, Horn returned to Yellow Springs to finish the book. He died six weeks later in November 2003.

Horn’s motivation for the book came from her feelings about Anderson and all the many ways he had positively affected so many people’s lives — not only on a national scale but also in his beloved community of Yellow Springs during the 1950s and ’60s. Anderson took part in marches and demonstrations for civil rights and he and his wife, Dorothy, integrated the First Presbyterian Church. He also organized the apple butter festivals and Christmas sing-alongs.

Horn appreciates the assistance she received on her book from villagers Susanne Oldham and Joan Brucker, who made suggestions and helped with proofreading, and Jane Baker, who did the final editing and guided the book to publication. Horn is also grateful to an unlikely contributor — the publishers who rejected the book.

“They were so kind,” said Horn. “They made suggestions of other places I should try. I thought they would be brutal, but they were really very encouraging.”

The book is published by the Yellow Springs Historical Society and is available at all local bookstores, Glen Garden Gifts, and Town Drug.