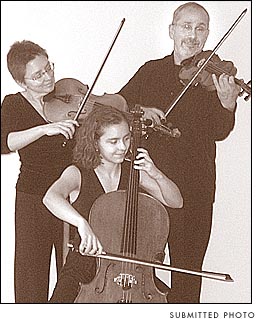 The chiming of church bells outside Wendy Champney’s home in Zürich, Switzerland rang clear and strong to sound the 6 o’clock hour on Sunday. It was a reminder that the time left to prepare before she and her husband and daughter returned to her hometown of Yellow Springs was growing short. They still had to arrange lessons for their music students, check with their booking agent, and above all, remember to pack one violin, one viola and one cello.

An instrument for each would be needed for the three performances they will give with the Carmina Quartet on their first U.S. tour as a family music troupe next week, including one for Chamber Music Yellow Springs on Sunday, Nov. 9, at 7:30 p.m. at the Presbyterian Church. A special celebration to honor Chamber Music’s 25th anniversary and its founders will begin at 5:45 at the church.

Throughout her life Champney has had impeccable timing. She grew up in the Vale playing music with her parents Peg and Ken Champney and had a ready-made teacher, Mary Schumacher, who lived just down the gravel road. Schumacher also played the violin with a semi-professional group, known as the English Trio, with Champney’s grandmother, Ava English, on the piano, and Shirley Mullins, who was then the Yellow Springs High School music program director, on the cello.

Coming of age in the 1970s, Wendy Champney found good fortune in the magnetic popularity of the high school music program, with the dynamic and sparkly Mullins at its helm. She and her musical peers Polly Case, Karin von Gierke, Karen Gordon, Simone Stave and Champney’s sister, Heidi, were always bringing together a string trio or quartet. They even played a movement of the Schubert String Quintet that the Carmina is performing on Sunday. Though the young Champney thought that being able to play the piece from start to finish meant that it was ready to perform (which they did at the Winds Cafe and school and private recitals), the now-older-and-wiser Champney still appreciates the early enthusiasm the school program instilled in her.

“It was the thing to do — it was a major social scene and it was central to the way high school happened for me,” Champney said. “It was like being in the theater program is now. I imagine there is a set of kids who live for that now.”

She had been told she was “a big fish in a small pond,” and she did have her doubts, but Champney never seriously considered doing anything else. So music it was. She went off to get a music degree at Indiana University, where she met her future husband standing outside her violin teacher’s door.

Matthias Enderle was an enthusiastic Swiss student doing post-graduate work at IU. He was raised on the music of a Protestant Church in Zürich where his father was an organist and music teacher. Enderle and his siblings all played the harpsichord and the organ and dabbled in other string and brass instruments until at the spongy age of 6, he settled squarely on the violin.

Soon after the couple moved to Zürich for Champney’s graduate studies in viola performance, they found cellist Stephan Goerner and then a second violinist to form a quartet. And when the group won its first major Borciani competition in Italy in 1987 (with its current second violinist Susanne Frank), they said goodbye to any semblance of a quiet life they might have had and began to travel the world, performing, at their peak, upwards of 100 concerts in one year.

Then somewhere in there, Champney and Enderle had a baby. Having learned about Brahms and Dvořák before she could talk, and travelled the world before she could walk, Chiara Enderle is an undeniable product of both her genetic and environmental influence. Now 16, she attends the Kunst und Sport Gymnasium, a public high school for serious artists and athletes, and has traveled widely for her own cello performances with the Twelve Cellists of Tuebingen and the Zurich Youth Symphony Orchestra, which toured Japan last summer.

And now, a year before the Carmina’s 25th anniversary, the group will enfold one of its earliest protogées into its ranks on Sunday when Chiara performs the second cello part of the same Schubert Quintet her mother played so long ago, if a little more practiced this time. The quartet will open with Haydn’s lively Opus 76 No. 5, followed by a jazzy number by Swiss saxophonist Daniel Schnyder that was commissioned by the group in 2005. The quintet will take the stage after intermission.

It is fitting that the Carmina is debuting with Chiara at the Enderle’s Yellow Springs home, where they have come nearly every summer for the past 18 years to teach and play at Friends Music Camp, a Quaker camp in Barnesville, Ohio, founded by Peg Champney. Although just about five years ago, Wendy finally found herself thinking about Zürich as her true home.

It took a long time for the shy, smalltown girl, who never planned to travel so far, to feel comfortable in a new country and in a new language (two if you count both the Swiss and high German that are spoken in Zürich). As if the stress of living abroad and perfecting an art weren’t enough, she also had to work herself up to mingle professionally at receptions and public events. But according to Wendy, when she makes up her mind to do something, she has an unflagging reserve of discipline and physical fortitude to get the job done. It has often been that way with individual practicing, she said, as opposed to Matthias, whose pure artistic passion for music gets him through four hours of practicing after the three-hour morning rehearsal with the quartet most days.

That kind of passion plays into the quartet’s reputation as a highly energetic ensemble with a lot of articulation (shorter, less sustained notes) that makes the texture of the music more transparent, Wendy said.

But as a well-established quartet, the players have settled into a slightly less frenetic schedule that allows them to stay home more near the Zürich University of the Arts, where they all teach chamber music and Wendy teaches viola. And instead of 100 concerts a year, their performance schedule this year began with a trip to Holland, took them to Italy in April, then on to Japan in June and to the U.S. and Spain this month. But the other months they were able to play locally at the Zürich Tonhalle, in the Swiss Alps for the summer festivals and at other regional events.

At least for the single family majority in the group, the musician’s life is a blessed one, and for no better reason than good timing and the stars. According to Wendy, local astrologist Lynn McCown once told her that this life was meant to be a happy one for her, and she doesn’t tend to look much further than that.

“My life happened like a path that opened up to me, and the only work I had to do was accepting that path deeply,” Wendy said. “Everything has unfolded to the peak of my capacity, and basically I feel very blessed.”