Zagory gets a kick out of football 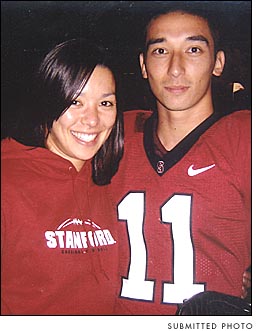 YSHS Class of 2004 valedictorian Aaron Zagory is the place kicker for the Stanford University football team. He is pictured here with his sister, Jessica Zagory, during a visit in Palo Alto, Calif.

As the argument about the value of retaining a football program at Yellow Springs High School raged on in the community forum pages of the News in recent weeks, one of the school’s graduates was steady as a rock, kicking field goals and extra points for the Stanford University football team. And, while he contributed a letter of his own to the News in support of Bulldog football last week, Aaron Zagory’s own persistence and perseverance on the field may be his best argument in advancing the tenet that football trains young people for the tough challenges they will face in life.

Having gone through several dismal seasons when he didn’t even get into a game, as a fifth-year senior going into the team’s last game this season, he was within a couple of field goals of breaking the Stanford season record for percentage of attempted field goals made.

Zagory started to get notice in the area’s sports pages when he kicked three field goals in an early contest against San Jose State. One of them was a 52-yarder that tied him for the longest in the Pac-10 Conference this year. His only miss in his first nine games this year was on a 49-yard attempt. But that kind of success was not always the case for Zagory. In 2006, the only other year he made it onto the field for the Stanford Cardinal, he was eight for thirteen and missed two extra points. (Note: the nickname for the Stanford team is the singular Cardinal.)

Unfortunately, against California in the final game of this season, Zagory had his worst game, missing one of two field goal attempts and missing a try at an extra point. Neither of the misses affected the outcome of the game, however, as the Golden Bears bested the Cardinal 37–16. His final totals for the year, as reported by ESPN, are 14 field goals out of 17 attempts and 35 extra points out of 37 tries. In his career he has kicked 22 field goals and 48 extra points for a total of 114 points scored for Stanford.

Interviewed via e-mail recently, Zagory, who was valedictorian of his 2004 YSHS graduating class, said he always knew he would someday play football for Stanford, a school he wanted to attend since he was a child.

“I loved soccer in high school, and would have loved the opportunity to keep playing, but I had to see if I could make it at the highest level in college football,” he said. “I told my parents and Mr. Smith (YSHS guidance counselor Dave Smith) it was for the education, but Mr. Rainey (retired math teacher and athletic director Chris Rainey) and I knew football was why I decided on Stanford.”

Asked about the numbers game with regard to participants in YSHS football, Zagory said, “When I was in eighth grade Yellow Springs had the Dirty Thirty, but we never reached those numbers when I was in high school. It didn’t matter too much, though. We had a great group of dedicated guys who worked hard every week of the year. Some of us doubled up playing both soccer and football in the fall, then we’d put more time in the gym during swimming, basketball, and track seasons, and also the summer.”

In his letter to the News last week, Zagory eloquently expressed his appreciation for two former YSHS football coaches and mentors, Jerome Crosswhite and Fritz Leighty.

In a recent interview, Crosswhite described Zagory as a player he could rely on to contribute in any way the team needed. Zagory played a little safety and got in for a few plays on offense as a receiver, but mostly he was a reliable place kicker. According to Crosswhite, opponents rarely got to return a Zagory kick-off, because he usually kicked it out of the end zone. As for field goals, in high school he was especially accurate from 40 yards and closer.

Crosswhite journeyed to South Bend, Ind., on Oct. 4 for Stanford vs. Notre Dame. While awed by the crowd of close to 100,000, he said he wasn’t surprised that his former player had made it to big time college football.

“When he told me he was going to Stanford and said he would like to try to make it as a walk-on, I told him to give it a try — with your work ethic, you might just make it,” Crosswhite said. “I used to get him the balls so he could put in extra time practicing his kicking.”

In the Notre Dame game, which was televised in the East, Zagory could be seen getting in on a tackle after a kickoff. Again, Crosswhite wasn’t surprised.

“He was one of our better tacklers,” he said.

When asked if he would consider turning pro, Zagory said, “I am deliberately not even considering the prospect of professional ball until my work at Stanford is done.”

“What a phenomenal story,” Stanford coach Jim Harbaugh told Palo Alto Online after Zagory’s three-field-goal performance against San Jose State. “I had people telling me who knew him when he first came here that they wouldn’t line him up to kick a PAT. They have never seen the kind of progress from one guy between his freshman year to his fifth year.”