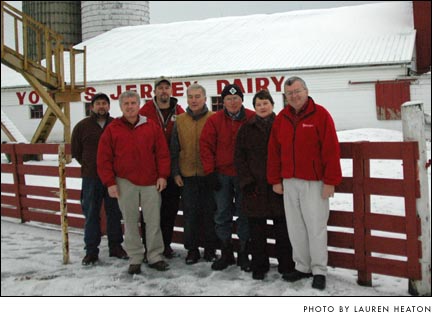 A Tuesday sampling of the Young's who were hard at work on the family farm this past week netted, from left, Jay, Ben, Stuart, Bill and Carl Young, Deb Young Whittaker and Dan Young for a brisk photo shoot in front of the original Young’s barn. Young’s Jersey Dairy is celebrating its 140th birthday this weekend with specials on ice cream, snacks and golf activities.

Since the surge of the digital age made last year’s computer nearly obsolete, it seems that everything has changed. But the love of the farmstead has not. When the Young brothers realized that in the 1960s, it was a short jump to figuring out how to transform their historic farmstead into a business that would survive the ages. It has, of course, and on the eve of its 140th birthday, Young’s Jersey Dairy boasts just over a million visitors a year and one of the most successful family-operated businesses in the region.

For its birthday party, Young’s will offer sales on ice cream and sundaes (served in limited edition commemorative mugs), food, and golf this weekend, Friday through Sunday, Jan. 16–19.

A short history of the farm now sits on every table in the restaurant, but the real stories come from the many family members who still live, work and play around the land their great-great-grandfather Gerhardt bought on his return from the Civil War. According to eldest brother Carl Young, Gerhardt, a blacksmith by trade, built the “red” barn in 1869 on the original 55 acres he farmed along what is now U.S. 68. His son-in-law Charles Young did the same, as did Charles’ son Hap Young, an Oliver Tractor dealer and dairy farmer who had three sons, Carl in 1928, Bob in 1932 and Bill in 1942.

In that day, Carl Young said during an interview over a Young’s breakfast, a son worked for his old man until the old man took his last breath. So Carl and Bob, like their father, raised jersey cows for the family business, Hap Young & Sons. But Carl and Bob also had ideas of their own. Carl was an entrepreneur who liked to try new things, and Bob was good at making things happen. So when the two put their heads together, they had the perfect balance for successful business, Carl Young said.

The Youngs bred their own national champion bull and national champion cow from the existing herd right on the farm, and with the help of younger brother Bill, who had a dairy science degree from Ohio State University, worked on expanding their herd to about 100 cows. They sold most of the farm’s raw milk to Mohler’s in Dayton, keeping a small amount to sell straight from the farm’s milk house. Customers paid 60 (cents) per gallon and put their money in the milk tray on the honor system.

Meanwhile the brothers expanded the farming operations to a total of 500–600 acres in Greene and Clark Counties, according to Dan Young, current CEO of Young’s Dairy. They raised not only cows, but also hogs, corn and wheat. And they sold their grains and milk to half a dozen other outlets and became the largest dairy operation in the area, selling 300 gallons of raw milk a day at the peak of operations in the 1970s. The family also built a dedicated retail store in 1960 as an addition to the main red barn that drew customers for many reasons.

First came the cow. As families frequented the farm more regularly, the young children began asking to see the cows. So Carl, or Bill, or one of their kids would walk them back to the pasture for a visit with Bessie. That’s when one of the Youngs decided to bring the cow to the kids by building a straw-filled manger-like enclosure where all the children could coo through the glass window at a soft brown calf with long lashes and a cute pink tongue.

And then came the ice cream. In the 1960s, Mohler’s offered to make ice cream from Young’s milk. The sweet, creamy single dip cone in 25 flavors was an instantaneous hit, and it soon became Young’s all-time biggest retail item, which still constitutes 21 percent of Young’s total sales, Dan Young said. Young’s built the second retail store and early restaurant in 1968, expanding that dairy store in 1972 and ’79.

The Youngs got their children involved in their growing business, Carl Young said, but were careful with this generation to let them choose their own futures independently. And many chose to stay with the farm. Carl Young’s son Ben is the business’s human relations manager, and Carl’s wife Marilyn sometimes drives the tour wagons. Bob Young’s son Dan is the CEO, and his daughter Deb Young Whittaker is officially the business’s “chief bean counter.” Dan’s wife Cathy does some bookkeeping and cooking, and their son John does public relations, while Deb’s husband Lee Whittaker manages Utters & Putters. And Bill Young’s sons Stuart and Jay manage the farming operations on and off the main farm.

All told, there are at least 12 Youngs who contribute to the operation, among the over 200 year-round employees who make the business hum. Young’s is incorporated, but family members populate the board of trustees, and decisions are made jointly, Ben Young said last week. It works well that way because everyone gets a chance to pitch ideas and discuss them, and there is one person chiefly responsible for making sure it all adds up to a profit in the end.

“We get along well, and we all have a common goal with common experience on the farm,” Ben Young said. “Every one of us has at one time milked a cow, which we all know is an early morning, every day activity. The business brings us back to our roots.”

And according to Dan Young, the family members all know that the main thrust of Young’s Jersey Dairy, and the one thing all of its operations should support, is the promotion of family and fun.

“It all hangs together if you think of what we’re selling as family fun,” he said.

That was a discovery that the elder Youngs made early on, which has turned their business into a virtually fail-safe gem that attracts both newcomers from afar and regulars from down the road who come seven days a week, all year long, except Christmas when Young’s is closed, Dan Young said.

Longtime Yellow Springs resident Bill Deaton, who used to own Deaton’s Hardware Store, began coming when the village drug store’s Dick and Tom’s Cafe closed. Seated with his cup of coffee and table mates Alex Roach, Ed Taras and Clifton resident Bob Heller on Monday morning, he challenged them to name the youngest American to be elected president, after which they would discuss the day’s top news, the best caulking agents and wax philosophic on many other topics.

Jim and Tim Shattuck also come regularly, with their buddies Lamar Spracklen, Jean Shook, and about seven others seated at the table with them on Tuesday morning. The Shattucks were buying Young’s milk with the cream on top in the 60s because the high butterfat taste from the Jersey cows was unbeatable. And they have come there since the dairy store was built for a cup of coffee and a gab fest with familiar faces on their way into work from Springfield to their auto repair shop in Yellow Springs.

Young’s stopped selling raw milk and raw milk products after salmonella was found in a small sample of the milk in 2002. And since the demand for ice cream and other milk products for the restaurant rose in the 1980s, Young’s has subsidized the volume from its current 50 jersey cows on the farm with milk and cream from Reiter, the company that now pasturizes Young’s milk and supplies the business with other ingredients for the ice cream still made on the farm.

The family agreed to add the first family activity Utters & Putters in 1993, and subsequently added batting cages, a driving range, and finally the Golden Jersey Inn restaurant in 1998.

While most of the family members still contribute to the operation, in 1977, Carl, Bob and Bill Young chose to step back and let their children run the business. Carl and Marilyn Young ran the Stocksdale restaurant in Springfield, and also began a long-term project planting an orchard at their homestead east of Springfield. Every year they added trees and now have 10,000 black walnuts started, some of them 40-feet tall. Soon after those trees were started, Carl also began planting white pines on the property he owned to the south of the dairy, where he now has 20,000 Christmas trees.

Having the intrepid will to go headlong into running a business can turn out okay as long as the profit margin exceeds both cost and interest, which is why, according to Carl Young, Young’s succeeded even though neither Carl, Bob nor Bill knew anything about the retail or food service businesses.

“Sometimes people say to me, ‘Everything you touch turns to gold,’” Carl Young said. “I tell them it’s fun to look at the things that worked, but you didn’t see the things that failed,” he said, referring to early mistakes in arbor care and a misguided business attempt with a chicken rotisserie that resulted in a year-long diet of almost entirely chicken.

But as a family, the Youngs have maintained a steady commitment to providing the farm experience as part of the American heritage, and one that has become increasingly inaccessible in the current culture.

“When I was young, a visit to the farm was no big deal, but gradually we built a culture where there is no longer access to the farm,” Carl Young said. “We started to realize what we were selling here was the farm experience. So you can’t go to Disney World every day, but you can bring your family here for fun a lot more often.”

Last year, 1.1 million visitors felt that when they came to Young’s, whether they realized it consciously or not. And this year, when Young’s begins its cheddar cheese-making operations, perhaps as many or more will be drawn back in search of ice cream, family fun, a farm experience, or whatever it is that this family business represents to so many of its enthusiasts.