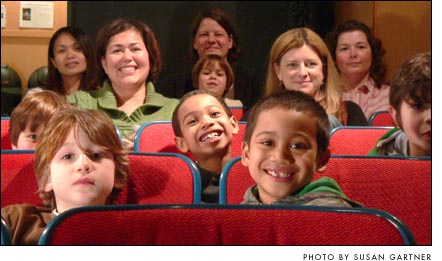 Secondly, their harmonious blend of brainstorming, delegating, organizing and follow-through allows for new ideas to be quickly tested, tweaked and tossed or implemented.

Thirdly and most importantly, their collective sense of humor provides a compelling work environment. There was so much fun going on at a recent meeting, in fact, it was hard to believe that a unifying goal was underway.

But there was. That goal is a children’s movie series, “Saturday’s Picture Show,” hosted by the Little Art Theatre two Saturdays each month, beginning Feb. 28. Special pre-screening activities start at 1 p.m., and the film starts at 1:30 p.m. Admission is free, but a $4 donation is suggested to help the Little Art cover costs and continue quality programming. Younger children, ages 3–7, should be accompanied by an adult or older sibling.

The five women make up the planning committee for the series. What brings them together is the business of parenting.

“We have kids who span the ages that we’re aiming to attract — 3- to 12-year-olds,” said Carlson.

Crawford spoke of a recent incident in which her husband took their 10-year-old son to what she and her husband hoped would be an innocent comedy that turned out to be wildly inappropriate for children. The commonality of this problem among all five women sparked the desire to come up with a solution.

Four of the five women already knew each other and were socializing through their children who attend the Antioch School. When one of them was approached by Little Art Theatre owner Jenny Cowperthwaite about starting up a children’s series, she knew exactly where to go for support.

“I went far and beyond to find these ladies,” laughed Chappelle, “like to my right and to my left!”

Carlson, who works part-time at the theater and is part of its larger programming committee, was a logical and eager addition.

“When I’m working at the Little Art,” explained Carlson, “and [we’re running] a movie that’s great for kids, people often say, ‘I wish you had more movies like this.’ I knew it was something that people want to see more of.”

The committee started meeting in January to discuss the logistics of the series. A primary focus was how to select which movies to show and how to address the legal and financial side of copyrighted movies for public viewing.

As a member of the Little Art Theatre Advisory Committee, Carlson had already been making calls to independent theaters around the country, researching various programming ideas. That’s when she learned about the Kids First! Film Festival, a project of the Coalition for Quality Children’s Media based in Santa Fe, N.M.

The mission of the national nonprofit organization is to teach children to become critical media users and to increase the visibility and availability of quality children’s media. For an annual fee, members choose from a list of new and classic children’s films from major studios and independent producers.

All films must meet the Kids First! criteria: no gratuitous violence, no racial or cultural bias, no inappropriate sexual content, no replicable unsafe behavior and no condescension towards children.

“I like that it’s pre-screened,” said Wirrig. “These are films I feel are more on the artistic side. It’s just fun to expose my children to this. I don’t have to think through, ‘What’s this movie going to be about? What can of worms am I opening up showing them this movie?’ That’s exciting.”

The Kids First! option was less expensive than the women bringing in their own DVDs or paying for shipping and handling of movie reels — both of which would require a licensing fee.

“We looked at other avenues as well but we decided Kids First! was the best choice for us,” said Crawford. “It was a no-brainer. They did everything for us. We just had to pick which movies we wanted.”

Two movies are slated for the Feb. 28 premiere. The recommended age for both is 5 to 12.

The first is a short film (18 minutes) titled, “March On! The Day My Brother Martin Changed the World.” The description reads: “In celebration of the 45th anniversary of the March on Washington, Martin Luther King Jr.’s sister presents a personal, stirring account of the remarkable day Dr. King delivered his ‘I Have A Dream’ speech, and of the man who went on to inspire a nation.”

The second is an animated movie (76 minutes) from the Jim Henson Company, titled Unstable Fables: Goldilocks & 3 Bears Show. The description reads: “Goldilocks, a sassy reality TV star, discovers what it’s like to be part of a family when she gets stuck at the humble home of the three bears.”

But “Saturday’s Picture Show” is much more than just a movie.

The premiere kick-off will be a “red carpet event” inspired by the season’s awards programs. Velvet ropes (donated by US Bank), paparazzi from the local news media (Yellow Springs News, Channel 5 and assorted parents), interviewers and, of course, a red carpet will add to the festivities. Participants are encouraged to dress up.

“I picture it being a family event, parents coming out with their children, walking the red carpet,” said Chappelle. “A community-like bond of doing something together just kicks [the series] off right.”

As the interview came to a close, Carlson remarked that her face hurt from all the laughing.

“If the kids have half as much fun as we have planning it, I think we’ll be okay,” she said.