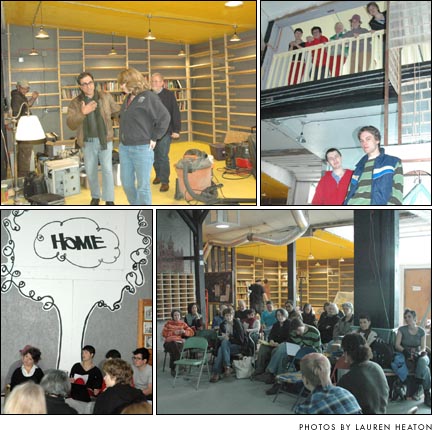 The Nonstop Liberal Arts Institute community will celebrate its new campus at Millworks on Walnut Street with an open house this Friday, Feb. 6, from 4 to 7 p.m. The public is invited. Shown above are, clockwise from top left, Nonstop IT specialist Tim Noble and faculty members Hassan Rahmanian, Jean Gregorek and Bob Devine in the library; Nonstop students in the new community government loft are, at bottom, Lincoln Alpern and John Hempfling and on top, from left, Kelly Ahrens, Reuben Hesselden, Molly Thornton, Shea Witzberger and Eva Erickson; bottom right and left photos, Nonstop faculty, staff and students took part in a community meeting on Tuesday.

The newly renovated space of Nonstop Liberal Arts Institute is significant on many levels, according to several Nonstop leaders. First, it provides a physical space that grounds the Nonstop community and gives it a home. And perhaps just as important, the new space works as a symbol of the creativity and adaptability that Nonstop has exhibited since it began a year ago, when former Antioch College faculty, staff and students decided to continue the values and traditions of Antioch even after the college closed its doors.

“We’ve demonstrated our adaptability regarding curriculum and also our ability to conserve some critical aspects of the college,” said Nonstop leader Chris Hill in a recent interview. “We have sustained the best of the college and at the same time creatively interacted with the village.”

The Nonstop community inaugurates its new semester and its new space with a grand opening this Friday, Feb. 6, 4–7 p.m. at its new headquarters at the Millworks complex, 305 North Walnut St. The event also includes a multimedia exhibition of art and journalism that reflect the ongoing efforts to revive the college, along with Nonstop’s evolving experiment in education. The event is free and open to the public.

The new Nonstop headquarters is a former manufacturing space that, over the past several months, has been transformed into two areas, one for staff offices and the other a center for the Nonstop community. According to Antioch College alumnus Michael Casselli, who designed the space, he and several others spent considerable effort transforming an “old, dirty” manufacturing space into an environmentally-responsible campus, constructed with a mix of recycled materials and green -innovations.

It was a labor of love, according to Casselli, an artist and set designer who moved to town last fall from New York City.

“It’s been a satisfying experience,” he said. “I have a lot of respect for the people doing the Nonstop project, and I’m happy to give what I can.”

Nonstop’s adaptability will be tested even further this spring, as plans for an independent Antioch College move ahead. In early January, after five months of conversations between representatives of the college alumni and Antioch University trustees, the trustees approved a letter of intent with the goal of creating an independent college. Alumni leaders are now engaged in fundraising efforts, with the intention of raising $15 million within 90 days in order to meet the terms of the letter. Should that happen, an independent Antioch could open its doors in the fall of 2010.

While much about the future college remains unclear, Nonstop leaders see their efforts as contributing to the reopening of Antioch.

“Nonstop is a bridge to an independent Antioch,” Hill said. “We’re reacting to the situation as it unfolds.”

No one knew what to expect last fall when Nonstop opened its doors. The majority of Antioch College faculty and much of its staff, funded by the Antioch College Alumni Association, last spring decided to launch Nonstop in an effort to continue Antioch College’s values and traditions even after college operations were suspended June 30 by Antioch University. Without a campus, Nonstop leaders chose to integrate into the Yellow Springs community, holding classes in churches and homes.

While Chris Hill hoped that villagers would take part in the classes, she had no idea if traditionally aged students would show up. While the cost of the Nonstop education was a fraction of what it had been at Antioch College, the current program is not accredited, and students had no central gathering place, no student union, no dorms.

But young people came anyway. About 15 fulltime Nonstop students, mainly former Antioch College students, came from across the country to town last fall to help launch the educational experiment. And even though the launch required from both students and faculty tremendous energy and more than a little inconvenience, almost all of last fall’s students have returned this spring.

For Ashley McNeely of Delaware, Ohio, her last semester’s experience at Nonstop was “the biggest adventure of my life. We had done so much, but we still had so much to do.”

“I didn’t know what to expect when I came, but I’m happy about what’s here,” said former Antioch College student Shea Witzberger of Solon, Iowa, who came to Nonstop from Antioch Education Abroad. “Nonstop has so many great classes and interesting people. You have to be engaged in community and help design what’s happening. It’s a continuation of the magic.”

And this semester Nonstop attracted several new students who had never attended Antioch College before. Previously at Northeastern Illinois University, Kathleen Connolly of Chicago decided to transfer to Nonstop because she wanted more of a sense of community, and her older sister had found that at Antioch. She found what she was looking for, Connolly said last week.

“These classes are smaller and all the professors are incredible and dedicated. We can see how passionate they are,” she said. “Young people need an environment like this, a real learning community.”

But establishing and maintaining that community last fall was one of Nonstop’s most significant challenges, according to Rahmanian. Without dormitories or a college cafeteria, students had to fend for themselves, and it was a stretch for some young people who had not yet taken on adult responsibilities. Consequently, Nonstop faculty and staff sometimes found themselves helping students with day to day tasks, including making budgets and organizing weekly community meals to make sure the young people were eating well. Former Antioch theater professor Louise Smith, who recently received a masters in counseling, offered her skills in working with students to address both daily needs and other challenges.

This semester, Nonstop leaders are putting even more focus on helping students learn to function well in a community. Smith is again offering her services, and more students are taking advantage of her skills. And Nonstop is offering a newly created class, Community, Organizing, Participation and Service, or COPS, that helps students both look at the importance of community, and develop needed skills, according to Nonstop faculty member Dennie Eagleson, who helped to create the new class.

Nonstop organizers are also for the first time requiring that each fulltime student give four hours weekly to activities necessary to meet the community’s needs. Overall, according to Rahmanian, Nonstop recognizes that the creation of community is a significant part of the Nonstop learning experience.

“This time community is taking place not by default, but by design,” he said. “This creates the space for enhancing community involvement.”

Another new aspect of Nonstop this semester was prompted by last semester’s experiment in incorporating older students into classes with traditionally aged young people. Because some older students have been out of school for many years and their skills were rusty, this semester Nonstop added an evening academic support program housed at the new space.

But overall, the combination of non-traditional and traditional students in classes sparked a richer learning experience, according to Rahmanian.

“The quality of conversations was heightened,” he said. “Questions were more thought provoking, because they came out of different sets of assumptions.”

Nonstop organizers tried to restructure some classes this semester to better meet the needs of villagers, recognizing that most adults don’t have the time during weekdays to take a regular schedule of classes. This time around, Nonstop is trying more abbreviated classes and daylong workshops.

So far this quarter, about 55 traditional and non traditional students have signed on for either classes or workshops, and more are continuing to sign up, according to Rahmanian this week. And again this semester, Nonstop organizers are offering Nonstop Presents, a series of evening and weekend talks and events.

Adding to Nonstop leaders’ challenges this fall, their first attempt at creating a common space in a Davis Street house didn’t work out. After zoning problems and concerns from neighbors about potential noise, Nonstop community members were again looking for a home.

One possibility was a large empty space in Millworks, in an area near downtown that is zoned light industrial. But the space, once used for manufacturing plastic molds for the former Corner Cat business, did not inspire visions of community and hominess.

Except, that is, to Michael Casselli, a former set designer and Antioch College 1987 visual arts graduate. After last June’s alumni reunion, Casselli decided to move back to Yellow Springs. He had lost his job in the production department of the New York Theater Workshop due to budget cuts, and realized he could continue his freelance design work while living elsewhere. He and Michael Jones, the partner of his former art teacher Karen Shirley, had begun planning for Eminent Domain, a new arts venture in Yellow Springs, and he had rented out a 5,000 square foot studio in Millworks, a size that he could never have afforded in New York.

Caselli moved back to Yellow Springs, he said, because “I wanted to help out with Nonstop. I have a strong belief in saving the college and maintaining the faculty.”

Where others saw a huge, empty old building at Millworks, Casselli saw potential. He began designing the new Nonstop center in October and, with the help of Antioch College alumni Gerry Bellow, Tim Noble and Meg Fleck, worked much of the fall turning the vision into reality.

The new Nonstop headquarters has two components, an area for staff offices and one for a central community space. For both, Casselli wanted to create as much natural light and warmth as possible, to enhance a feeling of hominess. He also aimed to use green practices and recycled materials as much as possible.

The public is invited to see the results on Friday. In the office area, walls separating the offices rise up to a foot below the ceiling, so that offices share both light and warmth. Much of the lighting comes from solar tubes in the roof that capture natural light. On a sunny day, the solar tubes provide all the light needed, Casselli said.

In the community area, Casselli designed a loft for community government, as well as an open-walled library and seating areas. He plans to build movable walls that can be used to create meeting spaces or present exhibits, and meetings will be held in a portable geodesic dome. An atrium at the entrance will provide more natural light.

Throughout the process, he sought input from Nonstop faculty, staff and students, Caselli said.

“I tried to keep it about community as much as possible,” he said. “It’s important that people care about this space.”

Nonstop students have contributed to the new space in a variety of ways, and in recent weeks could be found putting on finishing touches before the open house.

Not surprisingly, Nonstop leaders have incorporated the creation of their new space into their learning experience. While most elements of the new space are created so that they can also be used on the Antioch campus should efforts to reopen the college succeed, they offer a material home for the flexible and creative educational endeavor that is Nonstop.

“The decisions made about the space, the sensitivity to the environment and to community, became a metaphor for Nonstop,” Chris Hill said. “It became a teaching opportunity for us all.”