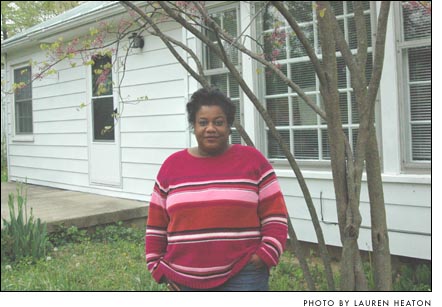 Yellow Springs native Tawn Jackson Singh moved into her first home in Yellow Springs with her husband Jai Singh in November 2008, thanks to support from Home, Inc. Tawn is a new member of the Home, Inc. board, which marks its 10th anniversary this year.

In terms of social memory, Yellow Springs has much to draw from recent history, including the coming together for Antioch College’s revival, the public effort to save Whitehall Farm, and the effort to prevent sprawl from developing on the west edge of town. A social memory of common experiences and struggles creates the kind of community that can weather political storms, according to local resident Don Hollister, and that is the kind of community he wants to support.

“It’s my notion that part of the quality of life in Yellow Springs, or any small town, is having what I call a social core of memory,” he said last week. “It’s subtle, but there’s a stability to having enough people around who are familiar with each other and have a common history. It takes the edge off of current conflicts.”

But social memory can only be built, he said, if people can afford to stay in one place long enough to invest in caring about what happens to it. By promoting affordability, Home, Inc. is one group that contributes to that needed stability. Hollister is a new board member of the organization which he helped charter a decade ago.

Home, Inc. is celebrating its 10th anniversary this year by starting a series of 23 neighborhood meetings meant to get more people involved and increase the community’s sense of ownership in the organization, Home, Inc. Director Marianne MacQueen said this week. In the past decade, Home, Inc. has helped provide affordable homes for 14 families. That’s 14 families who perhaps wouldn’t otherwise be here, but it’s well short of the goal Home, Inc. established five years ago: to have 30 affordable homes in Yellow Springs by now and ultimately make 10 percent of the local housing stock (170 homes), affordable.

“The goal is that we’re creating a stock of permanently affordable houses, starter homes, homes for retirees, homes that will always remain affordable,” MacQueen said. “To be successful, the community needs to own Home, Inc. and feel that it’s their organization — that it belongs to the community.”
The community land trust model that Home, Inc. uses originated in part with Yellow Springs Community Service founder Griscom Morgan in the 1950s. Based on the Jewish kibbutz idea that the land is owned communally while the house is owned by the individual, Morgan helped promote the notion of land trusts nationwide as a means of separating the ownership of the land from the house to control its cost, according to Hollister, a former Community Service board member.

When villagers began pushing for affordable housing in Yellow Springs in the early 1990s, including one proposal to use the old Bryan High School track area on Cemetery Street and another to convert what was then the old grain elevator into housing units, Village Council members Hollister and Deborah Benning agreed to vet the idea.

Shortly after recommending that affordable housing become a priority for Council, Hollister, Benning and then-Miami Township Trustee Roger Lurie incorporated Home, Inc. as a tax-exempt group. Its mission, later developed by the board and first executive director MacQueen, was to make it possible for people who work in the village to live in the village, and for people who grew up here to live here, while supporting economic diversity and racial integration.

Housing costs have been on the rise for decades, especially in Yellow Springs, because of its desirability as a place to live. But according to Hollister, a fair price for a house is not simply what the market will bear. A fair price, he said, is the original cost of the house plus “a reasonable increase” that allows a resident to maintain an average standard of living. Hollister knows of several “friendly” house sales between buyers and sellers who kept the price at a reasonable, lower-than-market value.

“In a way, Home, Inc. just institutionalizes that,” he said.

In 10 years, Home, Inc. has built or rehabilitated 12 homes, purchased one rental property and is in the process of finishing one more home in the Stancliff neighborhood. The Home Inc. homeowners have incomes between 50 and 80 percent of the area median income (most are between 60 and 70 percent of the AMI), a group of residents who make too much to meet the Greene Metropolitan Housing Authority requirement of 30 percent AMI (about $15,000) but still have trouble affording a home in Yellow Springs, MacQueen said.

“The demographics of our homeowners is another thing we feel good about,” MacQueen said. “Plus, a fourth of them come from outside of Yellow Springs, one from out of state, which shows there’s a demand for Yellow Springs and our program.”

So far, three of Home, Inc.’s homes have resold, all within about three years of purchase. According to MacQueen, one was originally purchased for $80,000, and the two others were purchased for $100,000. One of the homes resold for its original price, partly because it came on the market at the start of the housing downturn. But the other two resold for about $10,000 to $12,000 more than their original sale price, partly due to improvements Home, Inc. volunteers made at resale time. Those two homeowners walked away from the resales with about that much in appreciation and home equity, MacQueen said.

That formula is in keeping with Home, Inc.’s goal to keep its homes “permanently affordable” by not only taking the land out of the equation, but also restricting the resale price to the original sale price plus 25 percent of the appreciated value. The idea, MacQueen said, is to keep the increase in home prices from exceeding the average wage increase, which can help to counteract the trend that market rate housing has increased at a much faster rate than wages for decades in the U.S.

Newly appointed Home, Inc. board member Tawn Jackson Singh believes in helping to keep houses in the village affordable. Singh graduated from Yellow Springs High School in 1989 and has lived here near her father, Jimmy Jackson, renting ever since. She and her husband, Jai Singh, probably could have afforded a modest market rate home here, she said, but they wanted to be part of a movement that is working to increase the diversity of Yellow Springs. Even though it means the amount they can recoup from the increased value of the home they purchased in November will be limited, Singh believes it is the right thing to do.

But there have been some snags along the way for Home, Inc., MacQueen said. The Village zoning code, which prohibits increasing the density in certain areas of town, has stifled some of its housing projects, she said. If villagers want to maintain its current borders surrounded by all the beautiful green space and still have an economically, racially and generationally diverse community, more housing inside the village will be needed, she said.

“A progressive community looks at both the conservation of green space on the outside and the preservation of the human population on the inside,” MacQueen said. “Otherwise you become an upper-middleclass, gentrified community that young people, the elderly, teachers, police and others can’t afford to live in.”
Home, Inc. has made good headway, but it hasn’t happened as quickly as MacQueen had hoped.

“We feel good about what we’ve done, and in terms of perception we’ve made a lot of strides,” MacQueen said. “In terms of the housing numbers and having a real impact in the community, no. It will take 30 houses to feel like we can offer something to the community — not just to the lucky handful.”

Home, Inc. is reaching out with new projects this year, starting with neighborhood meetings throughout May and June, which are coordinated by new board member Barry Heermann. The organization has also begun a conversation with local businesses about partnering to provide “workforce housing” for people who are employed in Yellow Springs but may not be able to afford to live here. According to MacQueen, Home, Inc. is talking to one employer specifically about building a stock of houses on a property near the business that would be heavily marketed to the employees of that business. Home, Inc. is also working with Tecumseh Land Trust Director Krista Magaw to start a community garden project, MacQueen said.

For the past two years, Home, Inc. VISTA volunteer Kim Novak has been part of helping the organization reach out to the broader community. She sees that because Yellow Springs is a desirable place to live, it is becoming more affluent. But the village is also losing the variety of housing that allows a diverse population to live here.

“It’s sad that because people were successful here, they are going to lose the thing that made them attractive in the first place,” Novak said, referring to the village’s tolerance for diversity.

In addition, Novak, who spent time researching affordable housing policy in the nation’s capital before working for VISTA, simply believes that people deserve to have a choice.