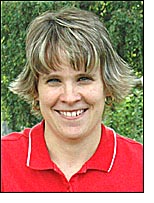 Julie Speelman is the new dean of students and athletic diretor at YSHS and McKinney Middle School.

When students arrive for their first day back to Yellow Springs High School and McKinney Middle School on Wednesday, Aug. 26, the first thing they will notice is a spritely young woman they don’t recognize greeting them at the door. They don’t know her yet, but by the end of the week they might feel like they’ve known Julie Speelman all their lives. As the school’s new dean of students/athletic director, Speelman will be the face of the school, and the person students will interact with most heavily for all their academic and extracurricular needs, YSHS Principal John Gudgel said in an interview last week.

The 2009–10 school year comes with other changes as well. While several high school elective courses were eliminated at the end of last year, all advanced placement courses have been restored. Both schools will begin at the same time, 8:50 a.m., and end at 3:29 p.m., and second period will be used as a “home room” period for all grades. McKinney maintains its schedule with the addition of a new intervention specialist to replace Pam Conine, who retired after 30 years with the district. And students can try out the offerings from the school’s new lunch vendor.

As the position of athletic director, handled for many years by former teacher Chris Rainey and then track coach Vince Peters, became a more demanding job, school leaders decided it should be addressed by a full-time staff member. As the athletic director, Speelman will oversee a program with 16 varsity sports plus McKinney teams.

As dean, Speelman’s spot near the school’s front door isn’t hers just for the first day — she’ll be there every day helping to account for incoming, absent and tardy students. Tardiness has become a major issue for some students, who seem to Gudgel to be on “Yellow Springs time,” he said. But the interruption is inconsiderate, and there is no excuse, considering that last year the school pushed back its starting time, which is later than any other district in the Miami Valley, he said.

“We’re one of the few institutions in the village that focuses on promptness,” he said. “We practice good habits of being punctual, which is a life skill.”

Speelman will also take on some disciplinary issues previously addressed by Gudgel.

Speelman, 36, has taught and coached for 12 years, first at a large school outside Houston, Texas, and most recently at Finley High School, where she taught health and physical education and coached volleyball while earning her master’s in administration from University of Finley.

A gymnast for 16 years, she competed on a Div. I team at Iowa State and got into teaching because she wanted to coach, she said in a recent interview. Though she hasn’t served as a dean of students per se, she has spent her career teaching youth about discipline and hard work.

Some high school students may be struggling to fill their schedules this year due to a drop in the number of elective courses the school is able to offer, Gudgel said. A gap was created when computer science teacher Jim Ventling retired last year and the district reduced the orchestra conductor’s position to five-sevenths time, eliminating world music and an eighth grade music course. That position will be filled by Dr. Eric Aho, who came in the fall 2008 as a temporary replacement for former conductor Yvonne Wingard. The scheduling gap was only partially filled by art teacher Elizabeth Simon, who will offer a new course in digital design this year. However, the school is restoring the three advanced placement courses that were dropped last year, AP physics, AP -biology and AP U.S. history, along with the previously offered AP chemistry, AP English and AP music theory.

The position of special education aid Donna Haller was made full time this year to support the three teachers who coordinate individualized education plans for 17 percent of the student body. Special education has increased over the years at Yellow Springs, largely due to more sophisticated ways of identifying students with learning disabilities, most of whom come from within the district, Gudgel said.

To increase student/teacher interaction and focus on core education skills, YSHS and McKinney have established a “home room” concept for students’ second period classes. The day will be broken into seven 47-minute periods, with 61 minutes devoted to second period. Students can use that time to practice the “drop everything and read” (DEAR) concept for a 15-minute slot each week (an all-school event that was instituted in 2007). And this year the school has instituted a second concept, “drop everything and logic” (DEAL), to allow every classroom in the school to focus on a mathematical problem each week.

“It’s a Yellow Springs thing,” Gudgel said last week. “The staff had felt that reading and literacy was a skill that was not being encouraged. Now with kids spending so much time on computers and television screens, they felt again that math and logic were also skills that are required in everyday life and should be offered as an enrichment activity.”

Teachers can also use the “home room” time to “bond with students in a mentoring capacity,” Gudgel said. The school will make its morning announcements at the beginning of second period, when most students will be there to hear them.

The school’s new food service provider, Sodexo, will hopefully bring more kids into the lunch room and encourage them to make healthier choices such as “fresh wraps” and a buffet-style bar, Gudgel said. And while the reduction in bus routes will likely affect the elementary students more, he encourages students to find a way to car pool, walk or bike to school. Currently about 50 to 60 students bike to the high school in fair weather.

Overall, Gudgel is confident that the school has managed the budget reduction that all districts are feeling in a responsible way. Cutbacks can be helpful if used to evaluate programs that perhaps are either no longer needed or are less useful than they were designed to be, he said.

“We’re used to having services that are never questioned, and change is hard,” he said. “But we have to make cuts when we’re dealing with the same budgetary issues as a school system that the Village is dealing with,” he said, referring to a shrinking population, a smaller tax base and fewer local dollars to support the schools.