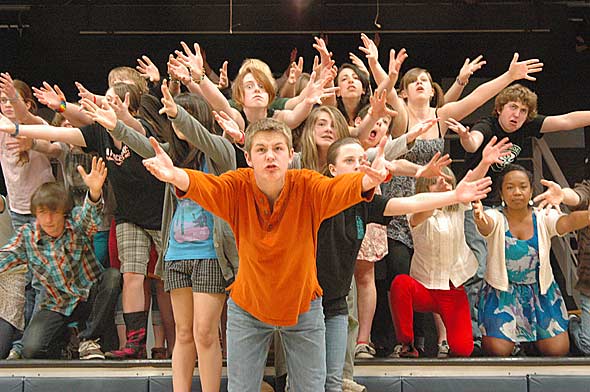 In rehearsal on Friday, April 16, Elliot Cromer as Officer Lockstock led the Yellow Springs High School cast in the opening scene of Urinetown: The Musical. The students open their spring musical this weekend at Mills Lawn.

The show opens Friday and runs this weekend and next. Performances are at the Mills Lawn auditorium on April 23–25, and the following weekend on April 30 and May 1–2. Friday and Saturday shows are at 8 p.m., and Sunday matinees are at 2 p.m.

Urinetown is about peeing, it’s true. But the story is also about the politics of peeing, and who controls the privilege to pee in a city challenged by a serious water shortage.

“It’s really about poor people being oppressed by the rich,” according to Adam Zaremsky, who plays Bobby Strong, the hero who incites an uprising against the urinal moguls who make the poor pay to pee. “Then I come along and Hope inspires me, and I decide to change all this, and I like start a revolution.”

The show, conceived and produced by Mark Hollman and Greg Kotis, opened on Broadway in 2001 and was nominated for 10 Tony Awards, including best musical and best musical score. Though the title may suggest some debauchery, it is rated PG and is appropriate for all audiences, according to YSHS Theatre Arts Association President Mary Beth Burkholder.

But that doesn’t mean that everything in the show is cheery and predictable, the actors say. And along with the twists in the plot, the creators based the overly dramatic characters and much of the music on spoofs of other well-known musicals, such as West Side Story, Oklahoma and Les Misérables. That element lends itself to the comedy that director Jeff Murphy thought would highlight the strengths of the YSHS thespians.

Narrating the show as Officer Lockstock, Elliot Cromer plays his “personality role” with “great facial expressions and command of his body and the stage, and brings a different dimension than I’ve ever seen before,” Murphy said. Zyna Bakari as the small but fierce Penelope Pennywise the enforcer “has got the most amazing singing voice,” and Anne Weigand as Hope and Zaremsky as Bobby play the earnest ingénue and the hero with authenticity, he said.

Murphy, a Yellow Springs resident, has directed Urinetown three times before for the Stagedoor performing arts training center he worked with in New York for 20 years. And the YSHS students performed parts of it in a musical review they created as part of the high school’s water unit two years ago. But this time, according to Zaremsky, the comic bits in between the songs come out in a much funnier way.

Stage Manager Jess Shake said that the actors brought their own creativity into the show, shaping original backstories for their characters such as the urinal plunger boy or the sexy office worker. And as the costumer, Judy Parker has helped to enhance the roles largely with found items. Brian Carlson is the tech director.