BLOG – My Japanese half 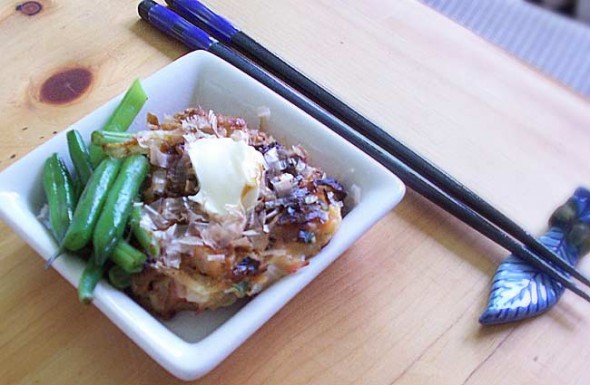 It will be a year today that my grandmother Kaki died. At the time I knew that the two Japanese cherry trees outside her house wouldn’t flower like they normally do. And I’m glad that even though the rest of the world went on as usual, at least the cherries had the decency to pay tribute to her life.

This month, however, those two old cherries blossomed like I’d never seen them before. And I felt connected back to my childhood, spent walking the three doors between my house and hers, often ending up in her kitchen. I sat on the sideboard amongst the familiar smells of hot barley rice and pickled radish, listening to her talk about growing up in the modern port city of Dalien, Manchuria. I miss those days and those stories, and I sometimes think that if I went to Japan I could revive that connection to her culture and her past.

I have a cousin who runs an okonomiyaki restaurant with her husband in Tokyo. Kaki never made okonomiyaki, a fat vegetable and seafood pancake. But Kayako made a modified version of it when she visited us several years ago. Then she sent the ingredients back for us to make it on our own. But a lot of the sauces have monosodium glutamate and other unspeakable chemicals, and I thought there must be a more authentic version we could make.

The Web is teeming with sites about okonomiyaki, including some pointless, low-quality cell phone clips of Westerners chowing on the popular street food. I guess that’s fun to watch? But I happened on a site called Cooking With Dog, and I simply can’t stop watching it. The host is a grey toy poodle named Francis, who perches beside the stove while the cook prepares traditional Japanese dishes, such as sukiyaki (a beef and noodle stir-fry), oden (a tofu and fishcake hotpot), and different kinds of onigiri (rice balls.) The foods make me think of Kaki and the recipes I collected from her, including her favorite, natto, fermented soybeans that string like okra and smell worse than ripe Camembert and asofetida put together. That one goes beyond adult foods, and I didn’t start to like it until Sheri Scott told me to try it with mayonnaise — when it went from ghastly to vastly improved!

Well anyway, this week I tried a version of Francis’s okonomiyaki, which my kids picked at and flung to the four corners of their plates, but which my husband and I thought was quite good. It reminded me a lot of the egg fu yung my mom used to make, with the shrimp and scallions, except it was fatter and more like a meal in itself. The yamaimo (taro root) didn’t foam up like I think it’s supposed to, perhaps because I got baby roots. But now I’m thinking I did get it at a Chinese grocery, so who really knows what the hell I picked up. The outside was crispy, and the inside soft, and again the mayonnaise topping smoothed everything out and created a taste with universal appeal.

If you want to “try it yourself,” as Francis would say, here’s my suggestions. And do check out the video, if just to see the dog. “Good luck in the kitchen! Arf!”

3. Heat griddle on medium with 2 T vegetable oil and shape 1 C amounts into fat “pancakes” on griddle. Cover and fry for about 5 minutes until bottom is golden brown and crispy. Flip pancakes, adding more oil if necessary, and lay two short bacon strips over top of each cake. Cover and cook four minutes or until browned. Flip again and cook four more minutes until bacon is crispy. Flip one more time.

3 Responses to “BLOG – My Japanese half”