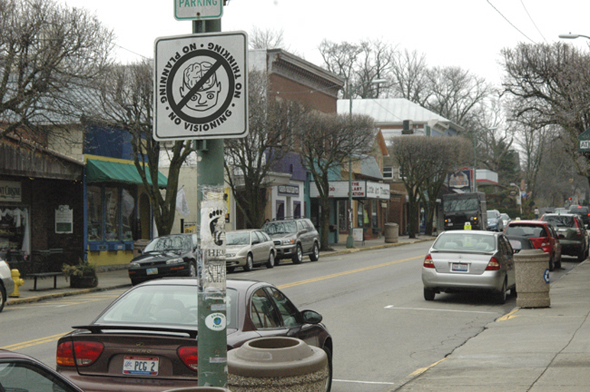 Village crews are mounting reminders like this one in front of Kings Yard, in response to mental health authoritiesπ concerns that excessive visioning has been responsible for ≥excitability≤ and other precursors of nervous disorders. The regulations go into effect Thursday, April 1.

Health concerns lead to ‘No Visioning’

Excessive visioning may be harmful to your health, according to the Greene County Combined Health District and consequently villagers are being ordered to take part in an upcoming “No Visioning” week.

“There’s evidence that those in Yellow Springs spend way too much time thinking,” said Greene County Combined Health District head Ura Mess, regarding what he perceived to be the health risk of the villageπs recent bout of visioning and planning. The blood pressure levels and other unidentified “nervous disorders” of Yellow Springs residents are on the rise, Mess said, and drastic action is called for.

Consequently, he has proclaimed the week of April 5-9 to be “No Visioning Week,” during which villagers are prohibited from thinking about the future, devising schemes to improve Yellow Springs, and debating these topics with others. After that time, according to Mess, villagers will be tested to determine if their health has improved.

The local police have been alerted, according to Police Chief John Groaning.

“We’re serious about this,” according to Groaning, who stated that those engaging in intense discussions, exhibiting furrowed brows or muttering to themselves could be jailed. Police officers will be on guard in the Emporium, Dino’s Cappucinos, Brother Bear’s, the benches of Xenia Avenue and other local hangouts in order to nab problem thinkers.

Some have expressed concern that without the opportunity to think and plan, villagers might become disoriented and wander aimlessly, according to Groaning, who said he didn’t share this concern, since aimless wandering is already a village pastime.

The health problems linked to visioning have been a long time coming, according to Mess, who stated that his concerns were sparked in the early 1990s when an increase in “excitability” could be linked to the first round of Yellow Springs visioning. The long lull between visioning efforts gave local residents a chance to calm down, he said, but problems spiked again after the most recent effort.

Village Council, the Miami Township Trustees and Visioning Task Force members will be rounded up and kept in custody for the week so that they do not set bad examples for citizens, according to Groaning, who said he was all too aware that such an action will set off protests from those who think “way too much” about civil liberties. But such extreme action is warranted to ensure the public good, Mess said.

“Frankly, people in Yellow Springs just need to stop thinking and shut up for a while,” he said. “Give it a rest.”