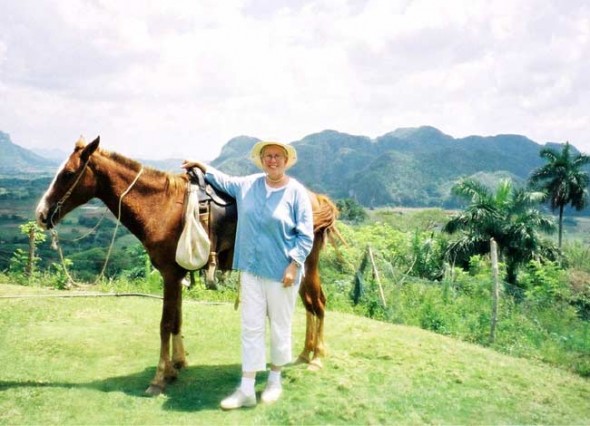 Jeanne Lemkau, shown here on a trip to Cuba last January, has recently published a memoir, Lost and Found in Cuba: A Tale of Midlife Rebellion.

Getting a bigger life, in Cuba

Clinical psychologist Jeanne Lemkau went from a windowless office at the Wright State Medical Center to living with nuns inside a leprosy sanatorium in Cuba, and from a career track in academic medicine to international activism and public education.

Lemkau, who continues a local psychotherapy practice, traveled to Cuba on sabbatical to study its health care system in 2001. What she found was a system achieving basic human health measures equivalent to the United States with much fewer resources. But she also found a larger life.

Ten years and eight trips to Cuba later, in her just-published memoir, Lost and Found in Cuba: A Tale of Midlife Rebellion, Lemkau explores her own midlife transition in the complex culture of communist Cuba. Lemkau will sell and sign copies of her book this Saturday, May 22, from 10 a.m. to 12 p.m. at the Emporium and in front of Current Cuisine in downtown Yellow Springs.
“I was ready to be out in the world,” said Lemkau, who has lived in Yellow Springs since 1980. “Claiming Cuba was a way of claiming a bigger life, claiming my right to adventure and claiming my right to be where I choose to be.”

Initially a book on Cuba’s health care system, Lost and Found in Cuba developed into a travel memoir that examines the many complicated facets of the U.S.-Cuba relationship, including the difficulties of visiting Cuba under a strict U.S. travel ban and the 50-year-long U.S. embargo’s devastating effects on the availability of basic medicines.

“We’re all complicit in that,” Lemkau said of the shortages of vital medicines like antibiotics and pain relievers, adding that her book was intended to shed some light on the U.S.’s closest offshore neighbor, about which its citizens have limited information.

In fact, before her first trip to Cuba with a group of former Peace Corps volunteers, Lemkau knew little about the country.

“I knew that Fidel Castro had taken it over sometime when I was in grade school,” she said. “I was a blank slate.”

Lemkau’s adventure takes her to health care clinics and government ministries, through a maze of international politics and into the lives of everyday Cubans.

On Cuban health care, Lemkau finds a system focused on community education and prevention, and on access to primary care medicine.

“I think Cuba does a rather remarkable job on that front,” she says.

When she finds herself at a leprosy sanatorium having her palm read by the resident psychologist, Lemkau reflects, “It’s very hard to go from that level of immersion in Cuba back to an office without windows.”

So Lemkau soon left her position as professor of family medicine and community health at Wright State, where she worked for 25 years, and began supplementing her psychotherapy practice with month-long excursions to Cuba. She began writing, about Cuba and about her personal journey.
“[Cuba’s] a hard place to be all by yourself,” Lemkau said, even after spending two years in Nicaragua in her early 20s as a Peace Corps volunteer. Especially demanding was speaking and understanding Cuban Spanish, which Lemkau jokes, “appeared to have neither vowels nor consonants.”

Yet most challenging was returning to her old life. “Even when it was difficult I wanted to stay in that bigger world,” Lemkau said. “I felt as if I couldn’t go back to an office without windows either literally or metaphorically.”

With her newfound love of Cuba, Lemkau now works to educate Americans on Cuban issues and promote legislative efforts to ease the travel ban and lift the embargo. In 2006 she curated an exhibit which documented the effects of the 2004 changes to travel policy on Cuban-American families, parts of which were used in congressional hearings.

She also serves on the board of the Latin American Working Group Education Fund with Mavis Anderson, the organization’s senior policy analyst for Cuba, who will be joining Lemkau at this Saturday’s book signing to share information on congressional action related to Cuba. Together they recently co-led a trip to Cuba in January where they took a group of 25 health professionals to the island.

All of these activities are an extension of her work as a psychologist, Lemkau said.
“Anytime you’re dealing with human rights issues, whether it’s travel issues or the rights of people to get medicine, you’re also dealing with mental health issues,” she said.

In Lost and Found in Cuba, Lemkau untangles the conditions of a country that defies simplifying, a place where the vitality of Latin American culture mixes with stark Eastern European architecture, where there is a deep undercurrent of need and where its people sometimes can’t speak freely.
“Communist Cuba was an odd destination for someone yearning to escape a too constricted life,” she writes. “I needed to grapple with a foreign country that was officially off limits, frozen in conflict with my own, and riddled with rules.”

Perhaps most of all, Lemkau’s experience is an inspiration to those who find themselves in their own transition.

“In many ways it was a really good metaphor for charting your own course in life — what rules do you go by, which rules you don’t,” she said, adding that the book is about determining what’s important enough to override the rules.

For Lemkau, who has now supplemented her doctorate in clinical psychology with a masters of fine arts degree in creative writing, visiting and writing about Cuba was important enough.
Lemkau said that “for those questioning their choices and thinking about paths they could’ve taken or dreams they’d like to claim,” Lost and Found in Cuba is for them.