BLOG – Art, hugs and the Man of Metropolis

I wouldn’t say I know a lot about art, or even a little; I can tell you an Andy Warhol from a Van Gogh, mostly because I recently spent six lovely but foot-achin’ hours in the Detroit Institute of Art looking at both of ’em, but I can’t tell you a Monet from a Manet from a Matisse from a Modigliani. (Though I do impress myself just now for even knowing those names. College degree, you’ve come in handy today.)

That said I know what I like, as does everybody. Not unlike a child, I tend to like things with color, things I can walk around in, things made out of stuff I can find in my house and, maybe most importantly, things that don’t take themselves too terribly, soul-groaningly seriously.

I was really excited when I saw last year that a phone booth was being installed at Walnut and Dayton streets. I was even more excited when I found out what it was actually for: a place for public art. Everybody who’s anybody knows the allure of a phone booth is not actually the phone itself; it’s 2010, and my eight-year-old sister has cell phone access. No, I think it’s more the idea of something so private, smack in the middle of all that is public, that gives the phone booth special appeal. It’s the extraordinary feeling of being closed off, for a brief moment, in the midst of being, for all intents and purposes, exposed. Maybe I’m getting a little esoteric here, but I think that’s what it feels like to look at a piece of publicly displayed art, and have some sort of emotional reaction to it.  It just seems natural that the creators of the Telephone Booth Project would seek to join the two.

I like to stop in at the phone booth whenever I pass it, which is most days, and I especially have enjoyed the “Spoon River Saga” exhibit, because I like hearing the literature, but also (mostly) because I like any kind of art I can play with and not get in trouble.

Imagine my surprise last week when, while waiting for clothes to dry at the coin laundry, I hopped across the street to the phone booth, only to see that something had encroached upon Spoon River. At first glance, it looked like a mere pile of clothes: 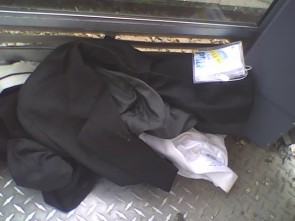 But upon closer inspection: 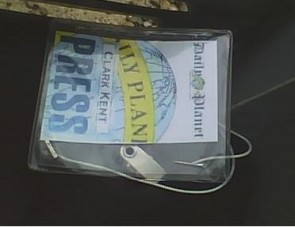 (I personally don't see why the Daily Planet keeps him on staff when he keeps running off while he's on the clock.)

Friends, I don’t think I have to tell you that I was overjoyed. But I will: I was overjoyed. If there’s one characteristic of a piece of art that trumps all the others that appeal to me, it’s the ability of a piece of art to surprise. Unfortunately it’s gone now, hopefully removed by the artist(s) and not by heartless vandals. But the discovery of this piece of impromptu art reminded me of a time when some friends of mine and myself were also led to make a public display. Allow me to regale you with a tale:

It was the summer of 2005, I believe, and my two best friends and I were living in the Florida’s capital, Tallahassee (or as my partner insists I call it, “The Hassee”). Bush was just settling into his second term, and we were facing another four years in Iraq, which meant, on any given day, we could see folks out in front of the capitol building, holding signs and protesting. I did a lot of supportive honking that summer.

But it occurred to the three of us that, though protest is common and so often necessary, it’s rare to see people holding up signs in support of anything, except at a ball game, pop concert or by “Twilight” fans. I can’t say which one of us had the idea, though I’d like to think it was born of all three of us simultaneously. Anyway, needless to say, we quickly made our own signs and headed down to the capitol building, to posit upon The Hassee our own message: 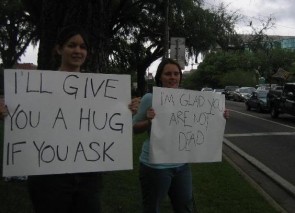 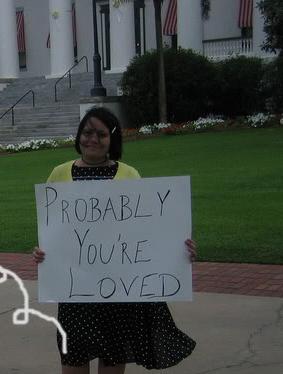 Yeah, so maybe it was a little cheesy, and certainly contrived, but we felt good doing it, and it was clear from the incredulous smiles of those passing that it made them feel good, too. The best part, though, was when a bunch of suits (and I mean “suits,” because they were literally all wearing the same style of suit) walked out of the capitol building. They saw us standing there, and I could see some of them immediately react physically, looking weary, thinking we were there to somehow bombard them with questions they wouldn’t or couldn’t answer. But then they read the signs. There was a pause. An elderly gentleman walked up to my friend Cherie, who was holding the sign offering free hugs.

“I’ll take a hug,” he said. We spent the next ten minutes or so hugging a bunch of old dudes we didn’t know.

Maybe it’s an overstatement to call that “art.” But it did what we wanted it to do: it made some people, including ourselves, feel better.

Yellow Springs is a town full of guerrilla art. From Clark Kent’s cast-off day wear to the fairies I remember seeing hidden on buildings during one of my first visits here to the yarn-and-flower bombing of any available public space to the decorated fry boxes handing around downtown, urging those who find them to “take something, leave something.” This town is, apparently, made out of people who want to make art that surprises, who want to make art that delights. This is a town of people who will give you a hug if you ask.

On a final note, I look forward to and will now shamelessly promote the latest installation in the phone booth, a video entitled “Awkward Hugs: An Investigative Report” by fellow blogger, Vanessa “Vee the Monsoon” Query. Be sure to check that out. And for better pictures of Superman’s aforementioned business casual, as well as more information on the Telephone Booth Project, visit telephoneboothproject.blogspot.com.

3 Responses to “BLOG – Art, hugs and the Man of Metropolis”