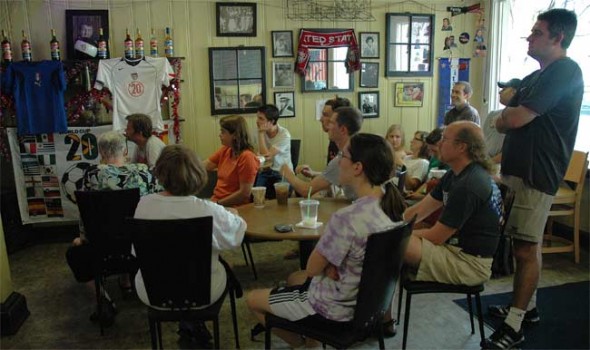 Villagers watch nervously at Dino's as the U.S. men's soccer team fights to stay alive in the World Cup. (Photo by Megan Bachman)

Local soccer fans filled Dino’s Cappuccinos to cheer the U.S. national team to victory against Algeria at the World Cup Wednesday. Fans were rewarded when, three minutes before the end of the match, U.S. forward Landon Donovan scored the winning goal. With the 1-0 win, the U.S. moves into the second round for only the third time since 1930.

Crowds have been gathering throughout the village over the last two weeks to watch the World Cup, taking place this year in South Africa. The U.S.’s next match is Saturday at 2:30 p.m. against Ghana, when crowds will no doubt gather at Dino’s and Peach’s Grille.

However, if the attention the World Cup is gaining throughout Yellow Springs is any indication, Americans may be warming to the sport.