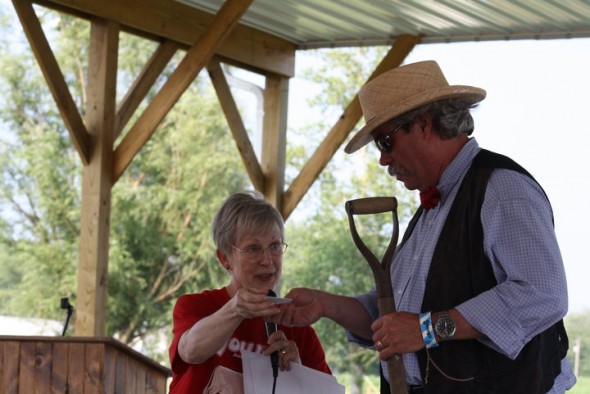 Liar’s contest winners serve up a bunch of ‘bull’

Very rarely do people line up to be lied to.

On Sunday, July 4, that’s just what happened. The audience gathered at Young’s Dairy for the second annual Big Bull Shake Liar’s Contest with the express purpose of having its leg pulled. Laughter erupted as each storyteller told their lies and tall tales.

The Big Bull Shake Liar’s Contest, part of the Young’s Dairy Small Town American BBQ Weekend, was hosted by the Yellow Springs Tale Spinners, consisting of Lisa Holmes, Eric Wolf, Harold Wright and Jonatha Wright, who acted as emcee. The contest was open both to youth and adults, and each category involved a qualifying round, with the top three performers moving on to the final round to be judged.

Winners from the youth category were Asa Chen, Devon Chen and Grace Homes. Grace won third place for her telling of “Dragons,” and was awarded a $10 gift certificate to Young’s and the Copper Trowel. Devon won second place for “My Cat, Bob,” and was awarded a $20 gift certificate and the Silver Trowel. Asa’s telling of “The Scratch” took first place, the prize being a full year of Young’s ice cream and the Golden Trowel. 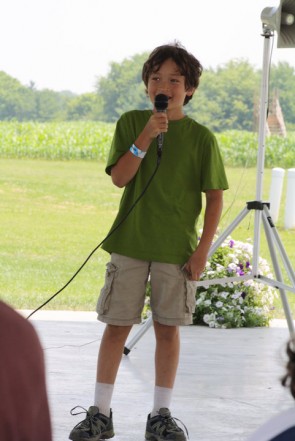 Asa Chen took first place in the youth category for his telling of "The Scratch." (Submited photo)

Adult winners were Megan Bihn of Athens, Stephen Hollen of Beavercreek and Linda Parsons of Clifton. With her “tragic, but hilarious” tale of crisis at the Fairborn Fourth of July celebration, Linda Parsons took third place, winning a $10 gift certificate and the Copper Shovel. Megan Binh won second place with a story about mule eggs, and was awarded a $20 gift certificate and the Silver Shovel. The Big Bull Shake first place winner was Stephen Hollen, with a story inspired by a recent family genealogy search that revealed some of his relations were on the wrong side of the famous Wright family.

The trowels and shovels awarded to the winners were meant to inspire contestants to keep on “shoveling” those big lies.

For more information on the YS Tale Spinners, visit http://www.mvstory.org.