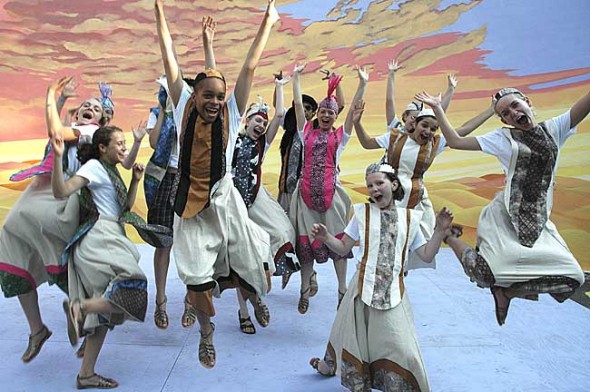 In its 16th year, YS Kids Playhouse continues to produce innovative youth theater for adults and children alike. Its latest musical, The Conference of Birds, explores themes of transformation and self-realization through a 12th-century desert fable.

Along with the original music and stunning visual displays audiences have come to expect of YSKP shows, new for this production is the use of puppets onstage. And while the plays have more recently explored teen technology, director John Fleming wanted to bring back a cultural focus with this year’s production.

“I wanted to do something really different,” said Fleming, who co-founded YSKP in 1995. “All of the lead characters are also puppets, which is the idea of transformation.”

Fleming adapted the script for The Conference of Birds, originally based on a Sufi poem by Farid ud-Din Attar, from a 1970s Peter Brooks book. The story follows the journey of a group of birds across the desert in search of a mystical land. According to Fleming, the birds are really searching for an inner life.

The production, which Fleming likens more to visual art than theater, includes both large and hand-held puppets, created by D. Tristan Culp and Phyllis Logan. Pierre Nagley contributed the costume design and choreographer Tricia Gelmini based several of this year’s dances on movement inspired by G.I. Gurdjieff.

Composer Neal Kirkwood returns for his third year of creating original music for YSKP. His jazz-inspired, harmony-rich songs feature lyrics from the Persian poet Rumi and the use of melisma, a middle eastern vocal style.

The 20 teenage cast members of The Conference of the Birds have rehearsed five days per week for the last month in preparation.

“It’s one of the most intense acting experiences,” said 15-year-old Claire Heister, a first-time cast member. “You have to apply yourself every day.”

Because YSKP shows are all original, its youth cast members are challenged to create their own characters, according to Fleming. This requires more creativity and group problem-solving, as the whole cast figures out how to tell the story.

“The environment in Yellow Springs is more conducive to creativity,” said Cincinnati-based acting coach Callie Schuttera. “Its truly about making art — and finding the message.”

According to YSKP Executive Director Lisa Hunt, each production incorporates themes that speak to both youth and adults. The Conference of the Birds explores unity, hope and pushing through to reach one’s goals.

“YSKP is not typical for youth theater,” Hunt said. “It’s sophisticated theater that rivals adult productions, but is done by children.”

In addition to producing two plays each summer, YSKP hosts acting workshops and classes. The nonprofit also recently published a book on its unique approach to youth theater.

Documented in the book is how an educational component works in tandem with YSKP’s productions, according to Hunt. Participants learn confidence, perseverance and discipline in addition to the acting skills which many YSKP alumni later use in college and professional theater. Hunt estimates as many as 10 percent of alumni have gone on to other theater experiences.

“At its essence, YSKP is about engaging people in a creative process,” Hunt said. “It’s a rich, diverse, hands-on learning laboratory in the process of doing shows.”

The second production of the season, Oceans of Notions (Lakes of Mistakes) with a younger cast, opens at the end of the month.

Click here for an exclusive audio slideshow featuring the cast of The Conference of the Birds.