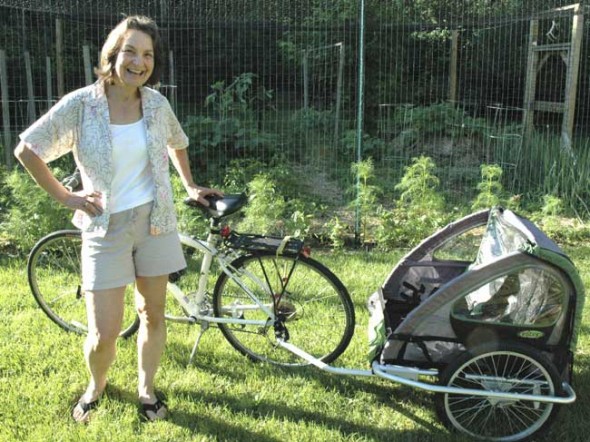 Kate LeVesconte showed off her garden and brand new bicycle carrier, which she fills with groceries from town for carbon-free transport to her home on Glen View Road. LeVesconte shares these energy conservation techniques at monthly meetings of the Ten Percent Club. (photo by Megan Bachman)

A group to support greening

Clinical psychologist Kate LeVesconte knows that support groups encourage positive behavior. So when she became concerned about the dangers of carbon fuel use, LeVesconte co-created an energy conservation support group, where people help each other live more sustainably.

The Ten Percent Club, whose members aim to cut their energy consumption by 10 percent per year over five years, began last January and meets the third Wednesday of every month at the Emporium from 6 to 7 p.m. Its next meeting is Wednesday, Aug. 18, and is open to the public.

“The impetus for the Ten Percent Club was to use our community connections to inspire one another to reduce our energy use,” said LeVesconte. “There’s a lot of synergy in Yellow Springs for this.”

Each month Ten Percent Club members share their personal progress toward reducing household energy use, everything from insulating their attics, to installing wood stoves, to putting in gardens.

“There is no perfect solution — you just do what you can,” said club co-founder Christine Roberts.

The small yet committed group also works for broader changes within Yellow Springs — such as through distributing flyers on saving energy at the June Street Fair and partnering with the Yellow Springs Energy Board to promote energy-saving actions community-wide.

“Most people are looking for ways to conserve — they want to know how,” said Roberts, who will develop a brochure with the club which will be inserted in utility bills to recommend alternative clothes drying methods such as drying racks and clotheslines.

Roberts and LeVesconte, who have both dramatically cut their resource consumption over the last few years, can testify to how challenging behavior change can be.

“The biggest impediment is feeling you’re all alone,” said Roberts, adding that the club’s fellowship and emotional support helps overcome this view.

Roberts, who has installed a wood stove and a tankless hot water heater in addition to gardening and using rain barrels, said that everyone finds their own ways to save energy.

“There are things we don’t want to give up and in our club we recognize and honor that,” Roberts said. Forgoing hot showers and travel and finding the time to use a clothesline were some of the more challenging sacrifices for club members, Roberts said.

LeVesconte found that the first two years of cutting her energy use by 10 percent were easy, but now, in her third year, she is struggling to find ways to reduce. She installed thicker windows and doors, switched to a more energy-efficient furnace, replaced old appliances, started gardening and raising chickens, cut her meat consumption and began sourcing more food locally. She now looks to plug leaks around her home and reduce her air conditioning use.

“Group pressure encourages us to do the right thing,” she said.

LeVesconte concluded that she and others had to reduce their energy use by 50 percent after reading a statement by U.S. Secretary of Energy Steven Chu. From her experience as a psychologist, she knew attempting a 50 percent cut immediately would be too much, so she decided to spread it out over five years, cutting 10 percent each year.

“We all know we need to reduce our energy consumption, but many of us feel overwhelmed, not knowing where to start,” LeVesconte said. “Or we feel disempowered that it won’t make a difference.”

LeVesconte said she hopes to start other energy curtailment clubs in Fairborn and Springfield and not to stop at her initial 50 percent goal, but to continue to reduce her energy use while helping others do the same.

Members of the club are motivated by a variety of environmental, social and economic concerns. LeVesconte, who, because of her mental health and psychology training, believes that people should treat each other well, thinks this care should extend to the earth as well.

“We need to manage behavior so we don’t extinguish the species,” LeVesconte said. “I’ve tried to find ways to live responsibly.”

After starting an alternative energy club in town several years ago, Roberts realized that conservation is also needed.

“Alternative energy is not going to fit the bill,” she said. “It’s hard to replace coal with anything clean that’s going to have the same amount of power — we have to reduce our consumption.”

“For me it’s to live a life I’m not ashamed of, with the world the way it is,” Roberts said.