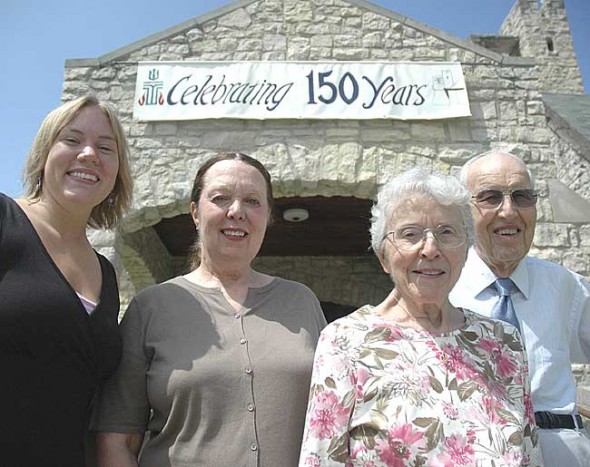 The Yellow Springs Presbyterian Church will celebrate its 150-year birthday on Friday, Sept. 3, from 7 to 9 p.m. on the church’s front lawn downtown. Church members, including above, from left, Jeanna Breza, Barbara Boettcher, Ruth Bent and Lloyd Kennedy, invite the public to attend the party for free cake, ice cream and lemonade.

In 1855 the First Presbyterian Church was founded in Yellow Springs when Nancy Love, tired of going by horseback in bad weather to churches in Clifton and other nearby towns, successfully convinced her husband Robert to start, with other locals, a Presbyterian church here in town. Five years later, the members, for $5,000, built the church that still stands on Xenia Avenue today.

Now, 150 years on, the church is throwing a birthday party for the community that supported it through its long history on Friday, Sept. 3, from 7 to 9 p.m. on the church’s front lawn.

“We hope the whole community shows up,” said church elder Barbara Boettcher of the event, where community members can get free cake, ice cream, lemonade and entertainment.

In attendance will be the great-great-great-niece of church co-founders Robert and Nancy Love, Caroline Metzger of Indianapolis.

While past celebrations on the church’s 50th and 100th birthdays have centered on religious activities and formal gatherings, such as a fancy ladies’ tea party in 1960, this year the church wanted a more informal and community-oriented event.

“There are no sermons, no speeches, no fundraising — just a big party,” said 50-year church member Ruth Bent.

The church has played an important role in the community for the last 150 years, offering one of the town’s few large meeting spaces in Westminster Hall, added in 1954, partially with public funds. The church also hosts a new Montessori preschool in one of its two classrooms and has sponsored a Boy Scout troop for the last 61 years.

“It brings energy to the building,” Boettcher said. “Because of our location in the center of town, it has been a center not just for the church but all kinds of community groups.”

Additionally, the church’s 139-year-old bell once doubled as the town’s fire alarm. The bell, which once was suspended from a nearby oak tree, is being newly re-commissioned and will ring in the birthday party.

In part a reflection of its liberal host community, the church has been a proponent for social justice throughout its history. It was involved in the local civil rights movement, with the church taking a public stance on desegregation.

“We’ve always been proud of being on the side of justice for everyone — that has not always been popular,” Bent said.

Continuing its justice mission, next month the church will bring a national exhibit of liturgical stoles of gay, lesbian, bisexual and transgender people of faith who have been excluded from serving due to sexual orientation.

In addition, church member Ruth Myers recently founded “Joined for Justice,” a network of Presbyterian churches in the Miami Valley working to reduce homelessness and alleviate financial distress in the Dayton area.

In its 150th year, the close-knit, diverse congregation of 89 members offers a unique church experience, having placed great importance on its music program and on blending traditional and more contemporary styles of worship.

The church has faced its fair share of challenges. After a year of having no pastor due to financial difficulties, last fall the Presbyterians hired veteran minister Doris Whitaker as their part-time pastor. However, due to health reasons, Whitaker has since left the job.

But the Presbyterians are facing their challenges with hopefulness. While currently in between pastors and facing both  declining membership and rising facilities costs, they aim to last another 150 years.

“We’re excited for a new part-time pastor, for the opportunity to have the birthday bash and to put a lot of the problems with the building behind us,” Boettcher said. “We’re optimistic for a fresh start and a new beginning — it’s an exciting time, a time of opportunity.”