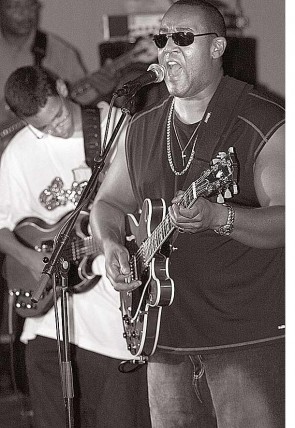 The mighty influence of African Americans in American music — from blues, jazz and rock-and-roll to hip-hop and R&B — is annually celebrated at the Blues and Jazz Fest put on by African-American Cross-Cultural Works, or AACW, each fall. At this year’s event, a diverse line-up of musicians playing blues, jazz, and traditional African tunes will both entertain and educate audiences.

Described by event co-founder Faith Patterson as a community-wide educational endeavor, the festival, now in its 13th year, features five bands over two evenings, Friday, Sept. 10, and Saturday, Sept. 11, at the Antioch Amphitheater. Admission is a suggested donation of $12 per day.

“It celebrates community and cultural diversity — it’s not just a concert,” Patterson said. “It’s not about musicians standing up but people learning.”

Leading off the festival on Wednesday, Sept. 8, is Gospelfest, a celebration of spirituals, the earliest form of African-American music and the roots of the musical styles that follow.

“It came way back from the fields — that’s where all of our music began,” Patterson said.

A free event starting at 7 p.m. Wednesday at the Central Chapel A.M.E. Church, Gospelfest features nearby choirs joined by the Northern Kentucky Brotherhood, who will perform a cappella, along with festival favorites 5YZ Men, from Lagos, Nigeria.

When the festival continues on Friday, Sept. 10, the 5YZ Men will take the stage at 9 p.m. with their former music instructor, jazz cellist Karen Patterson, Faith Patterson’s daughter. The classically trained musicians, a highlight at last year’s festival, return to perform high-life, afro-beat and blues music and further broaden the event’s cultural diversity.

“They are Africans straight up,” said Faith Patterson. “It’s just another way to learn about a separate culture.”

Also returning from last year is crowd-pleaser Daddy Mack, the 65-year-old bluesman from Memphis, Tenn., who was featured in this month’s American Association of Retired People, or AARP, magazine. His band performs at 10:45 p.m. Friday.

Another familiar face at the festival will be Nerak Roth Patterson, Faith’s son, who will record a live album with his band during their Saturday performance at 9:15 p.m.

A new act this year is the young R&B sensation J. Vaughn of Springfield, singing for audiences on Friday at 7 p.m. following the event’s opening ceremony at 6:40 p.m.

“Look for that name, because he’s going to become national,” said John Booth of the music selection committee, in speaking about J. Vaughn. “Expect him to be a major artist.”

Other new acts include blues rock band Bluzion, performing on Saturday at 7:30 p.m., and headliner Andrew “Jr. Boy” Jones from Dallas, Texas, the final act to perform, at 10:45 p.m. on Saturday.

Each year the selection committee pours over nearly 100 submissions in addition to seeking national acts to perform at the festival.

“We want to make sure that the show starts hitting hard and ends hitting hard,” Booth said. “We want a high energy show, and we like groups that know how to interact with the audience.”

True to its cross-cultural mission, AACW incorporates a diverse mix of musical styles at each festival.

“We consciously make an effort to try to bring in each year at the festival bands that are not the typical blues, jazz. It’s opening up to all of the cultures,” Booth said.

Yet focusing on the unique contribution of the African-American community is what the Blues and Jazz Festival is all about.

“Part of the mission of AACW is everyone counts,” Booth said. “By putting the AA [in AACW] first, we are expressing our culture but we’re also embracing other cultures.”

Furthering the educational and cross-cultural mission of the festival, Karen Patterson will lead the annual Innovation Stage at 2 p.m. Saturday, a largely impromptu collaboration among artists of all types that often includes poetry, dance, theater, culinary arts and music as diverse as reggae and country western.

“It was started as a platform to push the artist beyond the edge,” Karen Patterson said.

Artists of all ages bring a selection of their work to Innovation Stage, where they are paired with other artists and have 45 minutes to create a joint performance. The artists, who include some festival musicians, then perform their collaborative pieces throughout the afternoon and in between bands during the Saturday night line-up.

“We integrate people and wait to see what happens,” Patterson said.

The Blues and Jazz Festival’s accomplishments each year are attributed to the dedicated work of almost 200 local volunteers and diligent steering committees working for nearly a year.

“It’s a great grassroots Yellow Springs effort,” said Faith Patterson, adding that the festival continues because of villagers wanting to keep the music and legacy of the festival alive. Although the festival is AACW’s largest annual undertaking, the group also puts on a Kwanzaa celebration, frequently organizes “Guess Who’s Coming to Dinner” dinner parties across the village and arranges a Martin Luther King Jr. day commemoration.

Now in its 13th year, the festival was the conception of Faith Patterson and the late Bill Chappelle, who continued the successful African American Cultural Week put on by Antioch College student John Simms.

The festival now attracts from 3,000 to 5,000 attendees over the weekend to Yellow Springs, second only to Street Fair in the number of tourists it attracts to town and a definite boon to the local economy.

In a 2006 survey by Wittenberg University economics professor Dr. Dave Wishart, the average festival attendee came from 21 miles away and spent $42 at the festival itself and an additional $22 downtown. With attendance estimated at 7,000 that year, the total spent at the festival and downtown ranged from about $45,000 to $69,000.

“It’s not just a festival — people love to come here because of Yellow Springs,” Patterson said. “I couldn’t have done this anywhere — Yellow Springs is the place to do it.”