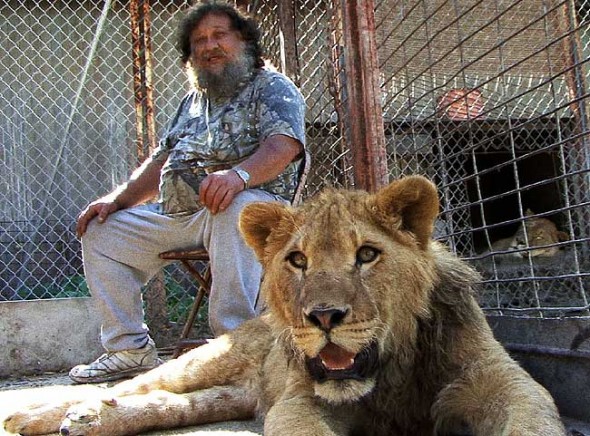 Exotic pet owner Terry Brumfield sat with his pet lions at home in Piketon, Ohio, in a scene captured by Springboro filmmaker Mike Webber for his award-winning documentary The Elephant in the Living Room. The filmmaker will introduce the film at the first showing of a run of sneak previews from Friday, Oct. 8–Thursday, Oct. 14, at the Little Art Theatre. (submitted photo)

Throughout the 1980s on the east side of Hilltop Road at Fairground Road there stood a modest, old house with a conspicuously large metal cage in the back yard. On nice days, passersby who happened to focus beyond the fencing would likely have seen what appeared to be a lion. Was it a pet? Did it live there permanently? Could it escape? Was it licensed and were its owners trained to…play with it?

These are questions that could arise more frequently if more people were aware of the enormous but closeted nature of the exotic pet industry in America, according to area filmmaker Mike Webber. He produced and directed a documentary on the subject titled The Elephant in the Living Room, which begins its theatrical premiere in the Dayton area with a run of sneak previews at the Little Art Theatre and the Neon the first two weeks in October.

In Yellow Springs, the film debuts at 7 and 9:30 p.m. on Friday, Oct. 8, with an appearance by the filmmaker at the Friday and Sunday showings. The film continues at the Little Art through Oct. 14.

Webber, a Springboro resident who produces films for Fox and Lionsgate, began his foray into documentaries four years ago based on his interest in the little-known world of exotic pet ownership. What he found during his investigation shocked him, he said during an interview this week.

“I was interested in filming unique characters in unique situations, and someone raising African lions in the back yard qualifies,” he said. “But the hook for me, and this is the elephant in the living room, is that this is going on all around us, and no one really knows about it.”

First of all, the sales of exotic pets constitute a multi-billion dollar industry second only to drugs and firearms in the U.S., Webber said. An estimated 15,000 large cats are privately owned in the U.S., and the state of Texas alone has more lions in captivity than the country of India, where they are native and live in the wild, Webber said of the legal side of the business. But while the vast market indicates a hugely popular fetish, 30 states have no laws banning the ownership of exotic pets, and 12, including Ohio, have no laws at all on the matter. Those states, Ohio included, rely solely on municipalities to decide how to regulate the ownership, care and management of the lions, tigers and bears in our midst, he said.

Large animal attacks make the news on a regular basis. In 2008 a 700-pound grizzly bear who starred in a Will Ferrell movie killed a trainer at a private facility in San Bernadino County, Calif., according to National Geographic News. That same year a 13-foot-long reticulated python constricted and killed its owner in her home in Virginia Beach, according to the Virginian-Pilot. In 2009 a 200-pound chimpanzee who had lived in a Connecticut home for years — tinkling in the toilet, eating at the table, logging onto a computer and watching television using a remote control — mauled the face and hands of a visitor and sent her to intensive care, according to a Fox News Web site.

While deaths by pets make the national news, the incidents that Webber captured in the making of his film illustrate the more common search and capture of exotic pets that have escaped and are wandering freely in public, including around the Dayton area. After meeting Tim Harrison, an Oakwood police officer and a well-known animal control expert, Webber followed him on calls around the country and caught on film alligators and snakes on the loose, bear cubs wandering the streets, a 20-foot python snaking around an apartment complex and an escaped African lion running down a major U.S. highway.

The film gives the perspective of Harrison, who has written two books, Wild Times and Wildlife Warrior, and in 2001 founded the nonprofit Outreach for Animals to educate the public about the dangers of owning exotic animals. But Webber, also wanting to understand the pet owner’s view, also documents the story of Terry Brumfield, a Pike-ton resident who has raised lions from cubs to full-grown adults and keeps them as pets.

While Webber has no political stake in the issue of exotic pets, he is cognizant of the current debate in the Ohio legislature over whether to initiate state regulations on large pet ownership. Several months after Elephant in the Living Room debuted privately at the Schuster Center and at film festivals around the country last spring, Governor Ted Strickland signed an executive order advocating the ban of exotic pet ownership. The issue may arise as part of the gubernatorial race this fall as well, Webber said.

“It really forced everyone to talk about the elephant in the living room — we can’t hide from it anymore because it’s being exposed and we have to address it,” he said. “It’s interesting seeing the power of a documentary — it’s not only for entertainment, but it’s also being inspired, educated, and encouraged to take action.”

Webber is passionate about the importance of independent theaters as the main venue for screening independent films, such as his. Independents are often low budget films that don’t promise the $30 million box office receipts that chain theaters prefer, he said. Many people in Toledo, for instance, have heard about Elephant in the Living Room and want to see it, but there is no independent art theater in that city, and so it likely will not play there, Webber said.

“Independent theaters are so important because it’s the only chance to see films other than Transformers and Air Bender, and if you’re okay with that for the rest of your life, great,” Webber said. “But I’m not. There’s a lot more great films out there than that…and that’s where Little Art comes in. If you don’t support the independent theaters, then you’re watching Transformers.”

Webber and Harrison will attend premiere events at the Neon on Friday, Oct. 1, and the Little Art Theatre on Friday, Oct. 8, at 7 p.m. Webber and Harrison will introduce the film at the Little Art’s Friday night screening and will be available for questions after the first show and possibly the second, as well as at Sunday’s 3 p.m. matinee. Elephant in the Living Room plays at the Neon from Oct. 1–7, and at the Little Art from Oct. 8–14. The film continues previews in Cleveland, New York, Columbus, Denver, London and Cincinnati this fall, and officially opens in theaters in January.

Webber advises parents of young children to consider that the film includes some scenes with stressed animals and television news clips of animal attacks and would likely be rated PG-13. Trailers and more information can be found at http://www.theelephantinthelivingroom.com .