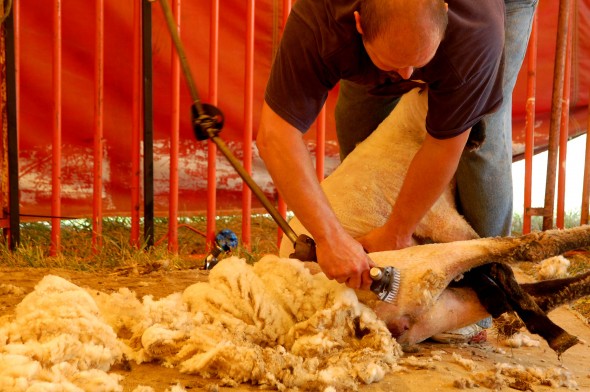 Sheep shearing may not be as popular in America as it is in Australia or New Zealand (where the sheep outnumber the humans), but we have reputable experts just the same. Take Don Haudenschield, for example. He has been shearing sheep for thirty years, since the spry young age of 10. He demonstrated the proper way to shear a sheep last Saturday during the Wool Gathering Festival at Young’s Jersey Dairy.

He used the Australian method (I guess they are the real experts), which involves holding the sheep between the knees and rotating it with your legs. The sheep was surprisingly docile during the ordeal, being as it was its first time being shorn. In just under five minutes, there was a fluffy pile of fresh wool on the ground.

Wool is one of the strongest natural fibers in the world. It is flame resistant (it smolders but won’t burn easily), and finds many uses as pool table felt, paint rollers and of course, clothes.