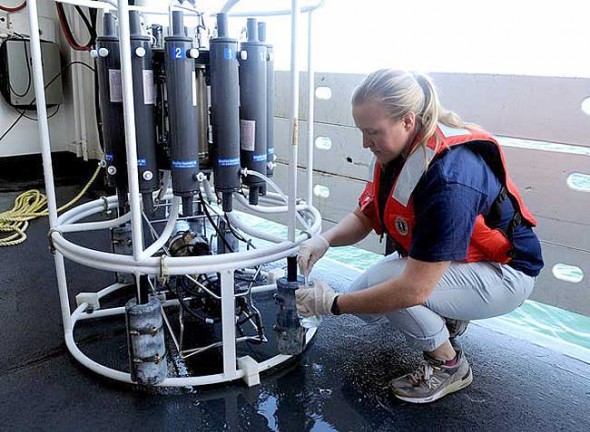 A NOAA scientist took a water sample aboard a ship in the Gulf of Mexico last month with water quality sensors similar to YSI equipment. (submitted photo from the Associated Press)

When a drilling rig exploded in the Gulf of Mexico this spring and millions of gallons of crude oil began gushing into the ocean, one local company jumped at the opportunity to monitor the toxic oil’s movement and measure its environmental contamination — YSI Incorporated.

With hundreds of their water-quality instruments installed in the Gulf prior to the disaster, YSI, formerly known as Yellow Springs Instruments, was well-placed to provide the data-gathering equipment for emergency efforts by government agencies and universities in the weeks and months following the spill.

Upon learning about the accident, research scientists at YSI’s Yellow Springs plant, the company’s global headquarters, developed a kit to integrate an oil-monitoring sensor into its existing real-time water quality instruments. These were sold to its existing customers to install on their systems and as a new, fully featured product that included both oil-monitoring and water-quality-measuring capabilities.

“Prior to the spill we had done some customized work integrating oil sensors into the platforms, but didn’t have anything off the shelf,” said Rob Ellison, a manager of YSI’s Environmental Monitoring Systems division in a phone interview from his Boston office. “It was a real fast response for us. We have systems in place that measure the state of the water environment — that’s what we do really well.”

Because YSI’s instruments could now measure both the amount of oil in the water and the health of the environment, all in real time, they were providing early indications of the oil’s impact on the Gulf ecology.

“We have all sorts of systems that measure the health of the environment — the oxygen concentration, the pH concentration, the temperature, salinity and clarity of water, how much algae is in the water,” Ellison said. “With all that information you can determine if a water body is polluted, if it’s healthy or unhealthy, how it responds to an event.”

Because YSI’s data is delivered in near real-time, it is valuable for emergency efforts such as the Gulf spill, as well as floods and other environmental disasters.

“That’s the real power of YSI’s products,” Ellison said. “If you really want to see what’s happening in the environment and act on the event, it’s giving you the data you need to take action quickly.”

The Gulf oil spill is just the latest of several recent disasters that the global company, which has 23 offices in 10 countries, has helped with. It donated equipment to relief efforts in Indonesia in the wake of the 2004 tsunami and in the U.S. after Hurricane Katrina struck in 2005, and provided water flow-measuring equipment during the 2008 flooding of the Sichuan province in China and earlier this year when the Red River flooded in North Dakota.

“We see disasters like this two or three times a year, and each time we try to respond as best we can and try to get solutions out there,” Ellison said.

Just a few weeks after the rig explosion, one of YSI’s new oil sensors was installed on the Weatherbird II, a University of South Florida ship hired by BP, the global oil company, to map the oil spill. It was one of the first ships to document the flow of the massive oil plume on the Gulf of Mexico’s surface.

Because YSI’s sensitive sensors can detect the presence of oil long before it’s visible, they were deployed all along the Gulf coast, giving coastal communities and nature preserves advance warning of the incoming toxic oil.

“We were measuring the effects of the oil as it hit the coast,” Ellison said. “It’s like a watchdog — most people set systems to send off alerts or alarms.”

Hundreds of YSI sensors and integrated measuring systems were sold to the U.S. Geological Survey, YSI’s largest customer, and to the state of Louisiana, the cities of New Orleans and Mobile, Ala., other state and local organizations, universities and a variety of environmental protection groups.

“We contributed to mapping the oil spill,” Ellison said. “Next is seeing what are the long-term effects on the coastal environment.”

Early reports from YSI instruments indicate that the millions of gallons of chemical dispersant used to break up the oil may be as big a concern as the oil itself, Ellison said. And while the water offshore may be clean, the sensitive inland coastal wetlands, which serve as fish nurseries, are where most of the chemicals are accumulating. Potentially impacted are protected species like manatees, dolphins and sea turtles.

“There is still oil coming from the Gulf — it’s changing and it will have unforeseen effects on the environment that we can’t predict yet,” Ellison said. “It’s safe to say there will be some impacts. We just don’t know the extent, and that’s what we’re setting the systems up for…It’s far, far, far from solved.”

Ellison said that when BP finally capped the well, most scientists thought that the Obama administration and the U.S. Environmental Protection Agency were “pressured to shed a positive light” by claiming that 70 percent of the oil in the Gulf was being consumed by natural microbes. “They don’t know that yet,” he said.

With more than $100 million in annual revenues, YSI’s sales in the Gulf oil spill response haven’t hugely affected its bottom line. Yet Ellison sees YSI’s contribution as vital to the mission of the 62-year-old, employee-owned company, started in a basement at Antioch College.

“One of our main missions as a company is to help deal with the environmental challenges that we face today,” Ellison said, by honing its technology to collect more data, more accurately. “We’re really trying to improve the knowledge of the environment.”