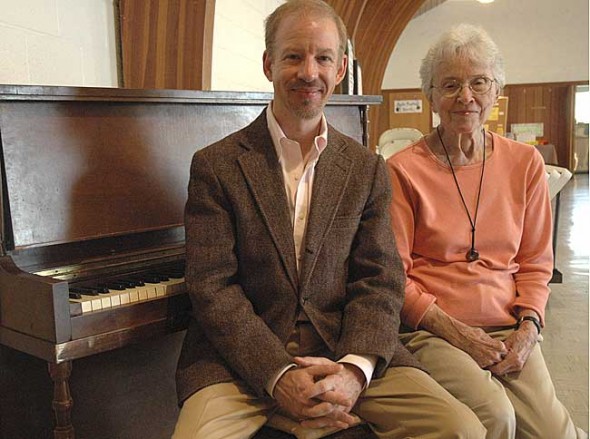 After 31 years, Ruth Bent is ceding her directorship of the Community Chorus to conductor James Johnston. (photo by Lauren Heaton)

A change of key for the chorus

Over the past 31 years, the name Ruth Bent has become synonymous with the Yellow Springs Community Chorus. And it was no small concern for Bent, when her eyesight began to fail, that the chorus continue with a strong and dedicated leader. So when James Johnston, sometimes referred to as Yellow Springs’ Mr. Music, agreed to receive the torch, Bent was overjoyed, she said last week.

For his first concert as conductor of the Community Chorus, Johnston and the chorus will pay homage to George Frideric Handel with a performance of Alexander’s Feast, an oratorio with orchestral accompaniment. The 1736 composition was based on an ode by John Dryden to St. Cecilia, who embodied the emotional power that music can have on the heart. The local performance will be given on Sunday, Dec. 5, near the time of St. Cecilia’s Day.

On first inspection Johnston doesn’t appear to have a lot in common with the 18th-century composer. Handel went to work in tights and a wig; Johnston wears tweed jackets. Handel composed by candlelight; Johnston by fluorescent bulb. Handel wrote the Messiah, one of the world’s most well-known English oratorios; Johnston won the Noah Greenberg Award for arrangements and performances of 19th-century American music. But both musicians did and do whatever necessary to engage in and spread the love and appreciation of music.

Johnston first came to Yellow Springs in 1997 as assistant professor of music at Antioch College, where he eventually became head of the department before the college closed in 2008. But instead of leaving the village, he grew new roots here by accepting positions as the music director of the First Presbyterian Church, director of the Community Band, director of the Chamber Orchestra, director of the Dayton Mandolin Orchestra, and finally the leader of the local chorus. And he has continued to commute from his home in Indianapolis, where he maintains an association with the Indianapolis Symphony and teaches at Marian University.

The community of Yellow Springs is unique in its wide spectrum of knowledge and interest in music, which is a draw for Johnston. Village musicians vary between novices and hobbyists to those who correct performers claiming Bartók died in 1944, by shouting that in fact it was 1945. That aspect makes perfect sense to Johnston, who prefers to approach music in a very pragmatic way, arranging parts for those who need a different range and reaching out to explain the context and meaning of the music to those who aren’t familiar with it. While he could lament the lack of arts programs in public schools of this age, instead he is impressed that modern tools such as MP3s and Midi software allow people who don’t read music well to learn their parts by ear. He sees that increasing music literacy is the first step toward making beautiful music.

Bent took a similar approach to the chorus when she became its conductor. She was with the Community Chorus when it began in 1972. She remembers the night of the raucous cast party following a Gilbert and Sullivan show at the Dayton Street Center Stage Theater, when the cast continued singing so much they decided the town should have a chorus. So music director Bill Jones started one with Bent, Shirley Christensen, Ned Oldham and the late Mitzy Manny, all of whom were until this year still members of the group.

Bent took over the chorus in 1979. She chose music she liked for a wide range of talent, including lots of Bach and Mozart, and always carried a whistle around her neck, to call the chorus members back together after the break in their rehearsals, she said. She recalls fondly two impressive performances of the Brahms “Requiem” and singing a wide range of other works from the past four centuries, including both sacred and secular music, African-American spirituals and several pieces written by local musician Tucki Bailey. And in her estimation, a big part of her job was to get chorus members to understand the emotion behind the music in order to portray it, much like actors do. She always liked to be able to say of a vocal performance, not “what a beautiful voice,” but “what beautiful music” she was hearing.

“If you sing with understanding, then the audience understands what you’re singing,” she said.

Longtime chorus members Bruce and Carol Cottom have been devoted to the group for over 26 years partly due to Bent, who has made it both fun and lent to it her “tremendous sense of musicality,” Bruce said this week. Bent also led the First Presbyterian Church choir and the madrigal singers for many summers, and maintained a culture open to both amateurs and studied musicians, he said.

Johnston aims to carry on the accessibility of the music for all the groups he now leads in the community. He thinks of music as a craft, which at the time of Handel and those who came before the industrial revolution, was a much more common form of participatory entertainment. But he also believes, like St. Cecilia, in the power of music to lift people’s souls.

He recalled reading in music history about an audience member complimenting Handel on having crafted such a fine piece of “entertainment.” Handel’s supposed response was that he was sorry, and that he “wished to have done better,” said Johnston, who sees the purpose of his work as the betterment of society through music.

“I remember attending performances as a youth and being wrapped up in it and nourished by it, which is something I try to create,” he said. “It can be a musical ode, a well-played march by the band, a charming waltz by the mandolins, and it doesn’t have to be lofty but it can bring a smile to someone’s face.”