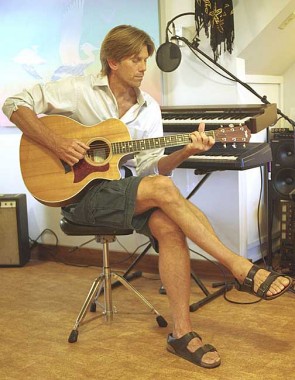 Longtime local musician Carl Schumacher, who grew up in Yellow Springs, has launched the New Schu band, a new creative endeavor that plays at the Emporium the first Friday of every month. (photo by Sehvilla Mann)

With a couple of old projects winding up and several new ones budding, local musician Carl Schumacher says he finds himself at the beginning of a “new creative cycle.”

Interest is building in his recently-formed band New Schu, a “new configuration” of the previous Carl Schumacher Band. He has plans to release a large body of original work on a new Web site, and is working with other artists on tentative plans for a local artists’ salon. Thus, while having recently laid longtime project Dr. Skillet to rest, he’s excited about a new period of musical efforts.

Schumacher was raised in Yellow Springs, where his introduction to music began early.

“I grew up listening to many kinds of music and learned to play many different styles,” he said in a recent interview.

His mother, Mary Schumacher, a violinist, trained him in the Suzuki method, and he quickly branched out from there. “I had this parallel track of improv, playing pop songs, playing in various groups since the fourth or fifth grade, and I’ve been doing it ever since.”

Schumacher pursued his career in San Francisco and Los Angeles before returning to Yellow Springs, has toured nationally and internationally, and has performed with musicians such as two-time W.C. Handy recipient Joe Louis Walker and Grammy winner Terrance Simien, a zydeco musician from New Orleans.

Professionally, Schumacher has mainly played keyboards, but also plays bass, drums, upright bass, has some formal training on the cello and sings.

“I sort of adapted to what was needed at the time, instrument-wise,” he said. He recently began playing acoustic guitar, on which he plans to perform in some of New Schu’s performances.

Dr. Skillet, in which he played keyboards, was one of Schumacher’s locally prominent projects. With Don Steinhilber on drums and Byron Crews on guitar and vocals, the band took a “small band, large sound” approach. About 10 years ago, Schumacher said, Dr. Skillet played a private event and became “the go-to band for parties” and continued to enjoy success in the decade that followed. He expressed his gratitude to his band-mates for their “tremendous influence” on his music “and also putting up with clunky moments when I was learning bass,” he said.

“Exactly 10 years later we are starting to get a really good response to this band,” he said, referring to New Schu. The group features Schumacher on keyboards (and now also on acoustic guitar, which he’s learning), Michael Kotur on guitar, and Steve Holster on blues harp. They play both original music and covers, in a wide range of styles.

“With Steve on the harp we can easily go from Chicago blues style music to Stevie Wonder to jazz,” he said. Latin, zydeco and funk songs are also in their repertoire.

“The band is sounding so good, it’s a really enjoyable combination of people,” he said. “I just like being able to play any kind of music we choose. It’s very developmental, too — a place where we can discover our own brand of music.”

He described Kotur’s guitar music as “unpredictable” and “unusual.”

“I like to feature local artists…we can back them in pretty much any style of music…it’s a nice way to present people who are not as readily known,” he said.

New Schu now has a regular gig the first Friday of the month at 7 p.m. at The Emporium and will also play the Dayton Street Gulch on Nov. 13 and Dec. 11 at 9:30 p.m. Beyond current bookings in the village and the Dayton and Columbus areas, Schumacher has plans to pursue touring nationally and in Europe. On a previous tour that included stops in Scandinavia, Germany, France and England, Schumacher found a warm and enthusiastic reception.

“They appreciate music like I’ve never seen before,” he said.

Schumacher has another major project in the works: the development of a Web site,  http://www.carlschumacher.us, on which he plans to release eight to 10 CDs of unpublished, original material, representing “years” of work.

“My passion has always been songwriting,” he said, explaining that his goal “by this time next year is to have all my music readily streamed.”

“The whole industry has changed,” he said. “The Internet is the medium for music. It’s just revolutionized the delivery system. It used to be that radio play pretty much determined whether you were heard, but now it’s more do-it-yourself. We’ve gone from complete domination of distribution, to artists sort of having to make sure they’re taking care of their own business,” he said.

The networking made possible by the Internet also makes it easier to be based outside a major city, Schumacher added, in a small but artistically vibrant location like Yellow Springs.

“This has always been a mecca for arts and innovative thinking…I don’t think we need to ‘envision’ it that way, it is that way. It has a magnetism of its own,” he said.

There are a lot of young folks out there on the street playing their music in Yellow Springs, Schumacher added.

“And they’re very soulful, too. I think it’s always a long shot to be any type of successful artist, but if you love to do it, that helps a lot.”

Taking advantage of the local creative wealth, Schumacher and several other artists have plans underway to develop a salon where people from different artistic pursuits can share their work in a supportive, celebratory atmosphere.

“It’s in the spirit of the mid-century salons of New York where it’s about presenting new work and having a party around it,” he said, adding that he would have more details at a later date.

Schumacher plans to balance his focus on these new projects, with a few that are ongoing. In addition to songwriting and performing, he said, “I also do music production, and sound design is something that I’m starting to do, working with plays and films.” He will also continue his side business in custom building and design, “helping people make the best use of spaces with economy and efficiency in mind.”

“I used to think they were mutually exclusive but now I see they go together,” he said, of his trade and his musical career. “Artists find ways to support their passion.”

One Response to “New creative cycle for musician”