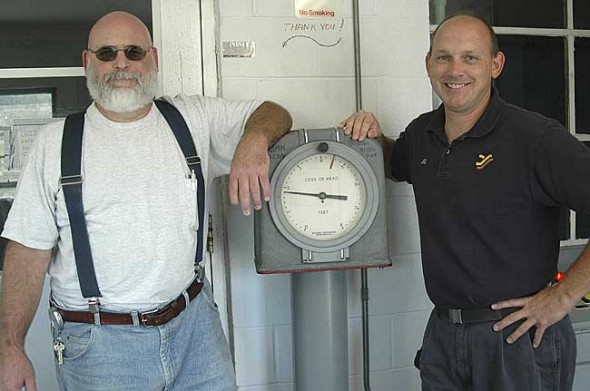 Ted Dunevant, the Village water plant operator, is being honored by the American Water Works Association for his 25 years of dedicated service to the Village. He is also responsible for recent Village honors from the Center for Disease Control and Prevention for 50 years of consistent and accurate fluoridation of local water, a task that Dunevant performs each day. He’s shown with Village Water and Wastewater Superintendent Joe Bates.

The keeper of the water’s source

Like the air we breathe, the water we drink is of vital importance to our health, yet its origins beyond the tap are somewhat mysterious. Down at the southern end of the village nestled among the foliage on Jacoby Road, Village Water Plant Operator Ted Dunevant quietly goes about the business of maintaining the quality of the public water supply. He has done so effectively for 25 years this January, and for his dedicated service he was recognized last month by the American Water Works Association.

The Village itself also received recognition last month from the Centers for Disease Control and Prevention for 50 years of fluoridating its drinking water and for maintaining a correct and consistent level during the past 12 months, all of which is part of Dunevant’s job at the water plant, according to Water and Wastewater Superintendent Joe Bates. Bates, who came to the Village decades after Dunevant, supervises the operation, but Dunevant has been so steadfast and meticulous in his job that Bates has been able to focus on the major renovation to bring the wastewater treatment plant on Grinnell Road up to Ohio Environmental Protection standards, he said.

Managing the water system means overseeing a series of systems that starts with the Village’s four active wells that lie within a seven-acre radius of the water plant and draw from an aquifer heavy with iron, manganese and hydrogen sulfide. According to Dunevant, those elements must be removed by aeration in the first step of purification, followed by sand filtration.

Next, antimicrobial chlorine and cavity-fighting fluoride are added to the water before it is funneled to the 100,000-gallon reserve tank at the water plant and then pumped up to the Gaunt Park water towers, each of which holds 1 million gallons of drinking water. The additive levels must be carefully maintained, including fluoride, which Dunevant is very skilled at keeping between the properly regulated .8 and 1.3 milligrams per liter.

Dunevant feels responsible for the Village’s water quality because for more than half of the life of the current plant, he has been at the belly of the operation. The clutter- and dust-free facility reflects the regulated methods he uses to do the job right.

“Consistency and cleanliness is what it takes — you gotta be here doing the same things at the same time every day, and you gotta be organized about everything and keep it clean,” he said. “I’m the big old bear hibernating down here and keeping things running.”

The plant is clean, but it’s also old. The Village used to get its water from Ellis pond, and then from the Funderburg farm south of the Riding Centre. Since it was relocated to Jacoby Road in 1962, the plant has not had a major overhaul, and the rust that has thoroughly penetrated the bolts on the main pump house pipe is evidence that a renovation will be needed within the next five to 10 years, Dunevant said.

Renovating the water plant will be an expensive endeavor, and Dunevant strongly recommends that the village consider tapping into Clark County’s water system. That system has the capacity to double its current load, and the supply is one of the municipal supplies closest to the village, he said. In addition, according to Dunevant, Springfield city water was recognized recently in an annual taste test performed by the National Rural Water Association.

While many people now drink bottled water, the village still uses an average of 400,000 gallons of fresh water each day, Dunevant said. The biggest users are YSI, Friends Care Community, the village schools and Antioch College, “when it’s open,” he said. And the reliance on Village water is never as clear as when the Village flushes its 230 hydrants each spring and fall, sending brown particulates into the water supply for the week. Villagers are advised, as always, to complete their laundry before the flush, which occurs next the week of Oct. 18–22.

Aside from brown water weeks, Village water is a very reliable system, which Dunevant has worked hard to maintain. He worked to get the communication system between the water towers and the plant off the power grid to direct current radio so that power outages wouldn’t interrupt the water supply. And the plant is now the recipient of a backup power generator, which was donated by Vernay Laboratories and is currently being installed.

He credits Bates for supporting his recommendations and allowing things to get done, such as the recent cleaning of the reserve tank by a professional diving team, which brought up three feet and over 45 years of sediment. The job can be repetitive, but Dunevant likes to be left to do the work he knows how to do, fluoridation included.

“I’m proud I’ve been here half of the time they’ve been doing this [fluoridation],” he said.

One Response to “The keeper of the water’s source”