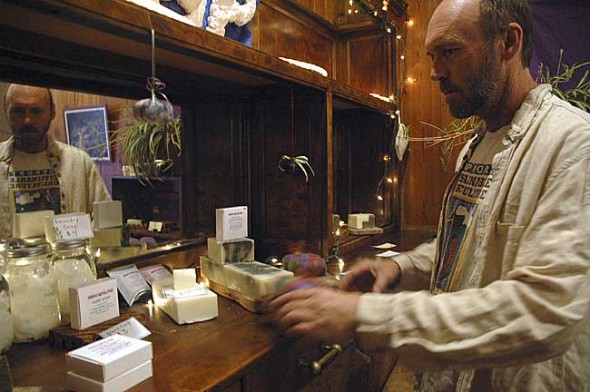 A soap maker for more than 20 years, Chris Entler and his partner, Jessica Wyant, recently opened the Soap Bar in Kings Yard, in the space behind Asanda Imports that was once the bar of the old Winds Cafe. Entler uses organic and natural ingredients in his products, which he has previously sold only at the street fair and Kings Yard farmers market. (Photo by Diane Chiddister)

Recently Chris Entler could be found in his new soap shop and studio in Kings Yard working on a new challenge: creating, with spearment leaves, an intricate design in a soap bar.

While Entler has in the past confined his creativity with soap to the kitchen of his Meredith Road home, he now has room to expand and explore. In his new space, which is in the back room of the building that houses Asanda Imports, Entler displays some of his products, including baby soap, and soaps made with lavendar-lemongrass, tea tree and lavendar-sage. He also makes pet soap, and an all-purpose household cleaning soap, all right in the shop where customers can watch. He uses products from his farm in addition to ingredients from as far away as France and Madagascar in his search for the best organic ingredients.

Entler’s dedication to quality is evident in the soaps he produces, a process he has been perfecting since he started making soap 20 years ago.

The soaps are made of so many essential oils that Entler’s partner, Jessica Wyant, calls them “practically aromatherapy.” The oils have distinct properties that give the soaps different characteristics and are exceedingly gentle on the skin. People with especially sensitive skin, in particular, would benefit from their soaps, Wyant said, since they are made of all-natural oils and ingredients. Commercially produced soaps are similar to detergents because of how harsh their ingredients are, and that harshness results in a need for moisturizer and other skin products, according to Wyant, who said many people with skin problems find that their problems clear up when using just natural soap.

At the Soap Bar, customers can pick soaps that are best suited to their needs. Lavender, which Entler sources from France, is soothing and mild to the skin, while ravensara, from Madagascar, is anti-bacterial. Lemongrass is popular in the summer because it is a natural bug repellent that smells good to humans.

The family’s commitment to organic and sustainable practices extends beyond the shop and onto their farm, according to Wyant. The couple raises sheep whose milk and wool feature in their soaps, including in a “felt bar” they developed that consists of a bar of soap wrapped in felt. Wool is naturally anti-bacterial, so the bar is more then just a washcloth and soap combined. The household cleaner, which Wyant uses on dishes and laundry in addition to general cleaning, was originally developed because Wyant wanted to feel good about what she was putting in the farm’s septic tank. In an effort to use local products when possible, the shop’s owners also use ingredients such as tallow from Dale Filburn, who they got to know at the farmers market.

Entler’s interest in soap making stems from his background in organic chemistry. He originally learned to make soap as the pioneers did while learning survival skills, but soon moved beyond the traditional ingredients of lye and ash to make soaps that were gentler on the skin. At first he just gave the soap as gifts, and then started selling it at the Kings Yard farmers market and entering it in juried soap shows. Entler and Wyant were excited when the shop space in Kings Yard became open because they were ready to sell soap year-round instead of just during the summer at the farmers market, and were also glad to be in Kings Yard because they value the walkability of downtown.

Now residents can just “come pick up a bar of household cleaner when they need it,” Wyant said, and they also like the “unique production space” of the shop that allows customers to watch Entler make the soaps one pot at a time.

Their current challenge, however, is keeping the store stocked with soap, Entler said, since he’s also filling orders for hemp oil soap for a hemp product store in Amsterdam. So he’s working long hours with his organic ingredients, pouring the oils into his handmade wooden boxes to cool, after which he slices the soap logs into bars.

Although their shop is just starting, the couple plans to expand their services soon. They currently offer soap-making kits and plan to start soap-making classes soon as well. In addition, they can make custom soaps, including a signature “wedding soap” that melds the bride and groom’s favorite smells. Their hours are currently noon–6 p.m., Friday–Sunday, but their soaps are also sold at Eco•Mental on Xenia Avenue if you run out of soap in the middle of the week.

Entler hopes that he can help Yellow Springers think of soap in new ways. Rather than seeing soap as a cheap mass-produced product, people should view it with the discrimination they might use when choosing lotions or body oils, seeking what’s most organic and natural.

“This is what we put on our bodies,” he said. “It’s what we wear on ourselves.”

Whether you come to the Soap Bar because you like how the soap smells or for its healing qualities, because of the local ingredients or the customized bags, you will leave with a product that is good for both you and the environment, Wyant said.

“Now there is another local product you don’t have to leave the community for,” she said, “And soap is pretty much essential.”

Hallie Cranos, a 2010 graduate of Earlham College, is a freelance writer.