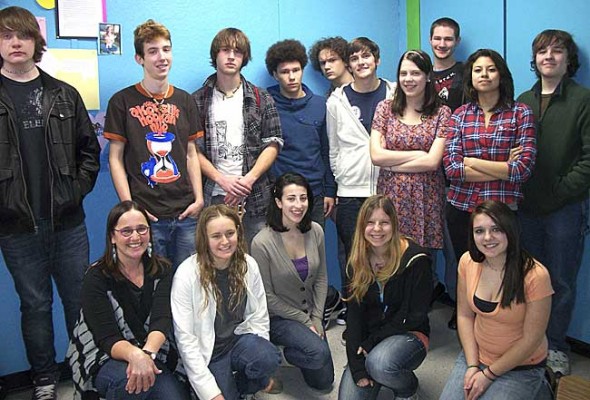 Along with many other changes that took place this year at YSHS, a new class was offered to students. Writing for Publications, a class run by English teacher Desirée Nickell, is a unique, workshop-type class in which students produce a monthly school newspaper. All articles and pictures are created by the students in the class, with occasional guest writers who are also YSHS students. In past years, YSHS has not had a school newspaper, something that Nickell has wanted to change since she started teaching at the school.

The editor of her own high school newspaper, Nickell has always been interested in starting a school newspaper. When she first began her teaching career at YSHS, she tried to start a paper as an extracurricular, but always wanted to be able to put out a paper more regularly, she said in a recent interview. This year, there was a smaller incoming freshman class, so Nickell was able to condense her regular three English 9 periods into two, thus opening a period for Writing for Publications.

The class of 15 students publishes one edition of the YSHS Watchdog a month, each averaging around 30 pages. They print anywhere from 75–100 copies of each edition for 50 cents each, with the profits going toward printing costs. After the previous edition has been published, the class has a planning day during which they decide on a broad theme for the paper that month. Themes so far have included bullying, the dress code, drugs and alcohol, and police and youth relations. The articles for that month are then based upon the theme, along with regular columns such as advice and gossip columns and music reviews that are present every month. The Speak Up column, modeled after a similar column in the Dayton Daily News, asks the student body questions geared toward that month’s theme. The students also conduct interviews each month with various community members such as YSHS Principal Tim Krier, Superintendent Mario Basora, and Police Chief John Grote.

The paper’s editor position rotates among several students and each student submits two pieces each month. Grades are based on the amount of work they put into the articles, how well written the pieces are compared to past work, and writing ability. The class consists of students ranging from grades 9–12, with a range of writing abilities as well as interests, a fact that Nickell said she loves about the class.

Moving into the new year, Nickell said she wants to push the students towards more investigative journalism as well as creating the layout themselves, a task currently completed by Nickell.

“It has surpassed my expectations,” Nickell said of the class.

The student body has been very supportive of the paper as well. Nickell said that she has only received positive feedback from both students and parents. Students in the class said they enjoyed being able to choose the articles they wrote as well as working with other students on the articles and the informal environment in which the class was run. The reasons for taking the class varies among the students but all centered around an enjoyment of writing.

“I took the class because I wanted to improve my writing and be more involved with the school my senior year,” Kelly Miller said.

Students also said that the class helps develop a good work ethic, time management, and, of course, writing skills. The paper is important to both the school and the students.

“Students really need to know what’s going on in their school. Especially with an administration transition like we’re going through now, I think the introduction articles on Mr. Krier and Mr. Basora were informative and really nice to have, and there are issues we’re covering that students don’t have a clue about, but have a right and a responsibility to be informed about,” YSHS junior Rory Papania said, referring to this month’s issue addressing the district budget cuts.

The YSHS Watchdog is a great addition to YSHS and has become a publication that students look forward to reading each month. Sophomore Liana Rothman said that the paper “really helps make the school a community,” and the publication does just that. The student perspective on issues is something students enjoy reading, as opposed to the perspectives of teachers or other staff. They enjoy reading articles their peers have written, that express the same types of concerns and opinions they themselves have on school related issues. The paper empowers students to speak up on topics they feel passionately about as well as have an outlet to showcase poetry and artistic talents.

“It’s the highlight of my year,” Nickell said, “To see people really enjoying it and enjoying the process. You walk down the hall the day it comes out and every student has it in their hands reading it. I just love that.”

Kelsey Cundiff is a YSHS senior.