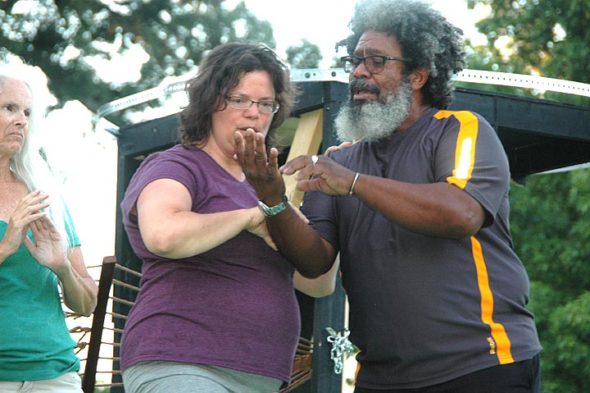 Continuing the tradition of presenting Shakespeare under the stars, the Yellow Springs Theater Company will present “A Midsummer Night’s Dream” this weekend and next, July 13–14 and 20–21, at 8 p.m., on the grounds behind Mills Lawn School. At a recent rehearsal, from left, villagers Ali Thomas, who plays Fairy Queen Titania; Amy Magnus, the fairy Cobweb; and Brian Upchurch, who as Nick Bottom finds himself in a temporary lamentable circumstance. (Photo by Carol Simmons

“It’s such a lovely play,” said Yellow Springs Theater Company founding member Lorrie Sparrow-Knapp earlier this week during rehearsal for a new production of the work.

In its third year presenting summer Shakespeare under the stars, YSTC is mounting the 400-some-year-old comic tale this weekend and next, July 13–14 and 20–21, on the grounds behind Mills Lawn School. Admission is free.

“I’ve wanted to do this for a couple of years,” said Sparrow-Knapp, who is directing.

“I think people need some of the delightful, beautiful imagery.”

Shakespeare employed the magical quality of midsummer to conjure a fantastical tale where four worlds converge during a night in the woods.

The quartet of intersecting plots involve a political wedding between the Duke of Athens and queen of the Amazons; a troupe of actors hired to perform for the wedding; four impetuous young lovers; and a band of fairies, whose domain the humans have entered.

Actor Rob Campbell, who plays Oberon, king of the fairies, said he is enjoying “the sense of magic” within the show. At the same time, the emotional life of the characters and the interactions between them reflect realities of life, he said.

“People can relate to it even though it’s fantasy,” said Campbell, who last summer portrayed Decius Brutus in “Julius Caesar.”

Shakespeare’s skill at creating characters who seem realistic while simultaneously making a larger comment about life impresses Jonah Trillana, who plays Lysander, one of the young lovers. The young man is passionate, yet fickle.

Literary scholars believe that Shakespeare wrote “A Midsummer Night’s Dream” in the same period he penned “Romeo and Juliet.” Trillana, a 2018 graduate of Yellow Springs High School, said he finds the different depictions of young love in the two plays revelatory. One a comedy and the other a tragedy, they show opposite sides of the same human condition.

Trillana’s take from “Midsummer” is “how fleeting young love is,” which can be both comic and tragic.

The local production’s 20-some member cast and crew will be joined by about a dozen children as little fairies, their movements choreographed by Elizabeth Lutz Warren, who also plays Moth Fairy.

“The fairies love summer,” said Warren, a Yellow Springs High School English teacher who leads a weekly children’s dance class at the Bryan Center. “It’s so luscious and amazing.” The winged youngsters will depict their joy with laughter and colorful ribbons.

Joining her fairy daughter on stage is frequent YSTC performer Sommer McGuire, playing the part of the fairy Mustardseed. McGuire noted that there are several other multi-generational family groups in the production.

A social activist, McGuire said that participating in the “Midsummer” production has offered her some respite from the contentiousness of the current political landscape, and she believes play-goers will find the same relief.

“If ever there was a time in the world for fairies and magic …” she said, her sentence trailing off.

Director Sparrow-Knapp expressed similar feelings, noting the “beautiful setting”  of the Mills Lawn grounds as an additional balm for the soul.

Sparrow-Knapp said that while the play is full of conflict and “everyone is at odds;” by the end, “some peace is achieved.” And that’s a goal worth emulating.

“We could use so much more of that in the world right now,” she said. “We all want happy endings. In ‘Midsummer’ we have a happy ending.”

Performances of the Yellow Springs Theater Company’s “A Midsummer Night’s Dream,” by William Shakespeare, will begin at 8 p.m. Fridays and Saturdays, July 13, 14, 20 and 21. Admission is free. Bring a lawn chair or blanket for seating.