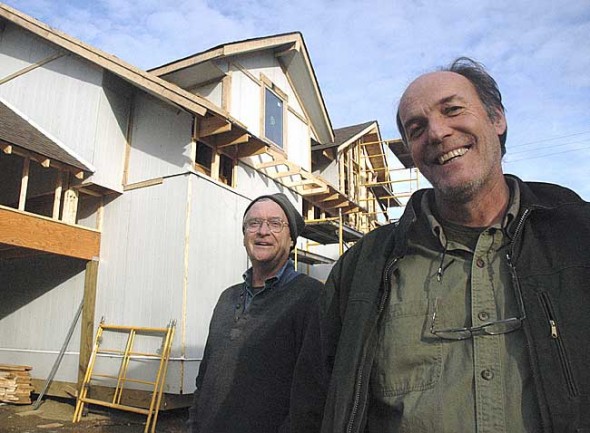 Home building may not be his primary career, but Yellow Springs electronics distributor Roy Eastman is no novice either, as he has co-developed the Park Meadows and Kingsfield neighborhoods with builder Jonathan Brown as well as spent the last several years researching energy-efficient building and retrofitting his company’s office. Now, on three lots under construction at Brown’s Thistle Creek development on King Street, Eastman and Brown are back together with an ambitious goal — attempting to build houses that can stay warm without fossil fuels or electricity.

The three spec houses, financed by Eastman and built by Brown, will be 1,600, 1,200 and 800 square feet, and with the right combination of windows for solar gain and 16-inch thick insulated walls to retain heat, will be heated year round by the sun rather than a fossil-fueled furnace.

“The way we got started was what would it take to build a house that if the grid went down for a few months, the house would stay livable,” said Eastman, who is co-designing the structures with Brown.

Eastman bought the 10 remaining Thistle Creek lots from Brown in 2008 and together they are taking many of Brown’s tested passive solar homebuilding principles a step further. They are also using some of Brown’s techniques for minimizing the structure’s impact on its surrounding environment, building homes that are easier to maintain, and keeping costs low.

Brown bought the 4.2 acre Thistle Creek property in 2005 and, using a Planned Unit Development ordinance, plotted 22 single-family homes on small lots along with a wooded common area for the community. Since Brown built an initial six homes for Home, Inc., three market-rate homes, including a farm house retrofitted by Brown, have also been sold in the development.

In Eastman’s first spec house under construction, which has 1,600 internal square feet, Eastman and Brown are employing many of the same techniques Brown used in his Park Meadows development, including orienting the buildings to the south and using windows designed to let in heat during the day and prevent heat from escaping at night.

“You have to evaluate every window and characteristics you want it to have,” Eastman said. Windows along the south-facing wall are designed to let in the most light and heat, whereas those on the north and east, which are desirable because of their view and light, should be more insulated to prevent heat from leaving.

While the windows are the main heating source, according to Eastman, an air-to-air heat exchanger, which is more than twice as efficient as a gas-fired furnace, will be used to regulate the temperature and a tiny woodstove will be installed as a back-up heating device if the temperature drops under 10 degrees below zero. It took Eastman months to find a small enough woodstove that would not overheat the house. He eventually settled on a 12-inch-by-12-inch-model designed for a boat.

Going well beyond typical energy-efficiency measures, Eastman’s five-bedroom, two-bath house has 16-inch thick double walls, whereas most conventional buildings have just one wall that is four-to-six inches thick. This way Eastman can drastically increase the amount of insulation in the structure so the building can retain the sun’s heat rather than require a furnace.

In addition to building his own energy-efficient home in the Vale using radiant floor heating and windows for solar gain, Eastman, who owns Electroshield, Inc., recently retrofitted his company’s High Street office to save energy and built a new, efficient addition. By widening the building’s walls to 12 inches thick, installing triple-pane windows to increase solar gain, designing shade overhangs and upgrading lights, Eastman said he has realized a 15 percent to 20 percent reduction in electricity use even while the project is not yet complete.

Brown brings his own well-tested methods to the project, including his innovative pier foundations, which Brown used in the six Home, Inc. houses in Thistle Creek. Pier foundations are less expensive to install, don’t require the extensive excavation that crawl spaces or basements do, don’t disturb nearby tree roots, reduce infestation by termites and carpenter ants, minimize radon, are better for storm water retention and allow the use of cheaper and higher quality insulation for the floor, Brown said.

“You can’t take a home out of its environment, so we try to leave the site as natural as possible,” Brown said. Because of the use of pier foundations, trees proliferate in Thistle Creek, which is rare for a new development.

Some residents of the Home, Inc. homes initially experienced freezing pipes, which may have been caused by cold air getting underneath the pier foundations, but Brown has since installed insulated boxes to protect the pipes from freezing. And in Eastman’s homes, water pipes will run through a temperature-controlled space, forestalling any potential problems.

Among the amenities Eastman is incorporating into the house are a two-vehicle carport, a shed and attic for storage, hanging toilets whose tanks are built into the wall for easier cleaning and two screened-in porches, on the first and second floor, made from oak.

With front porches and rear carports and walking paths along a stream on the property, Brown envisioned Thistle Creek, the fifth development he has done in Yellow Springs, as a walkable neighborhood. With Eastman’s homes going up, the neighborhood is starting to take shape.

“When you maximize amenities, increase common areas, it becomes more of a neighborhood,” Brown said. “I always want it to be a neighborhood — not just streets and houses.”