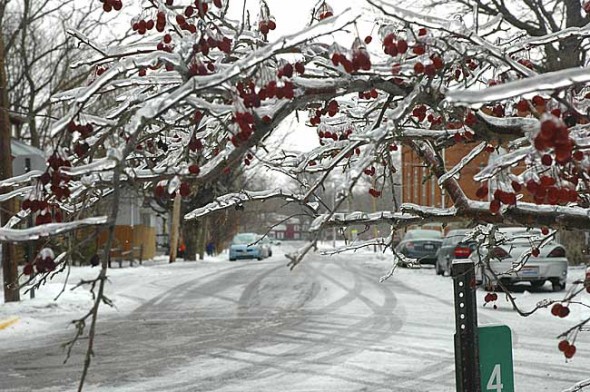 The ice storm and winds that walloped Yellow Springs Tuesday night left about 75 percent of village residences without power overnight Tuesday and into Wednesday, according to Police Chief John Grote on Wednesday morning. While electric crew members are doing their best to restore power, on Wednesday morning Grote said he could not forecast when village power will be back to normal.

Villagers who need a warm place to go are welcome to come to the Bryan Community Center gym, which is powered by a backup generator, Grote said. Seniors who are needing warmth may call the police at 767-7206, and they will provide transportation to the center. On Wednesday morning the police had already made about six welfare calls to check in on local seniors, Grote said, stating that he was not aware of any injuries caused by the ice storm or cold.

The power outages occured at scattered sites all over town, caused by trees falling across utility lines and blown transformers, Grote said. The Village was also seeking help from utility crews in neighboring municipalities, according to Grote, who said that Yellow Sprngs appeared to have been “right in the middle of the ice and wind” of Tuesday’s storm, and therefore perhaps hit harder than some neighboring towns.

The electric crew was not able to work overnight on Tuesday due to the danger of working on electric lines in the rain and dark, according to Grote, who said that crew members were on the job very early Wednesday morning. While the crew had succeeded Wednesday morning in restoring some of the outages, the going was slow and it wasn’t clear how quickly progress will be made.

Tuesday’s storm came a day after an initial ice storm on Monday overnight that left roads and sidewalks nearly impassable Tuesday morning. While some of the ice melted during the day Tuesday, it froze up again in the evening and was followed by the freezing rain and wind that did in local power.

Many of the outages might have been avoided had villagers kept their trees trimmed, Grote said, stating that the police department had received about 20 calls from villagers who had trees down over lines in their yards.

Chief Grote urged villagers to be prepared for such unexpected weather events.

”Have your cell phone charged and food on hand,” he said, adding, “Make sure you’ve trimmed your trees.”

One Response to “The ice storm cometh, leaving destructive path”