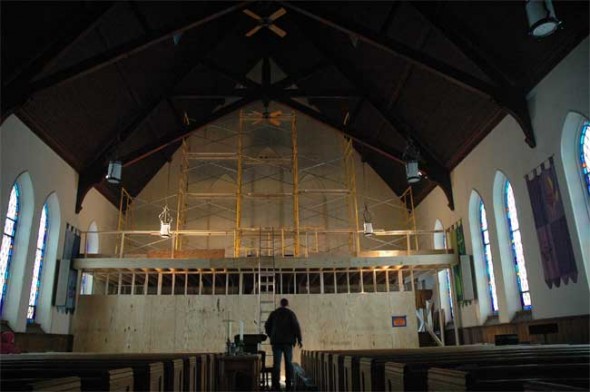 Tommaso Gregor stood before the scaffolding he erected at the First Presbyterian Church in order to re-plaster the sanctuary's west wall. (Photo by Matt Minde)

Presbyterian church gets a makeover

The First Presbyterian Church is repairing structural damage to its 150-year-old sanctuary and the 57-year-old Westminster Hall.

Church elder Libby Rudolf secured a grant from a private organization last year to seal the church’s leaking roofs and re-mortar the exterior’s crumbling stone.  The sanctuary’s west wall, damaged by water, is now being re-plastered.

The grant was given so the building could continue to host a variety of local groups like the Boy Scouts, Alcoholics Anonymous and Chamber Music Yellow Springs.

Former pastor Doris Whitacker also helped procure an additional grant from the Synod of the Covenant of the Presbyterian Church to refurbish the front steps, which have suffered from weather damage. And Chamber Music Yellow Springs will be installing better lighting for its musicians with the group’s own funding. 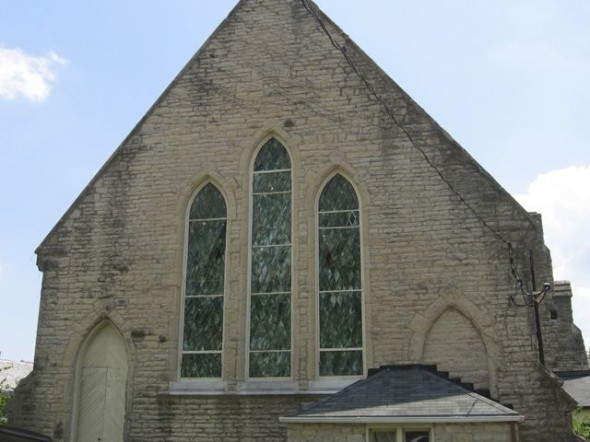 Rudolf said the church hopes to raise the $15,000 needed to renovate the west wall’s large green stained-glass windows,  plus additional funds to weatherize the building to save on fuel costs.

The church also recently hired a new pastor, Joe Hinds, a southerner with a conversational style and a passion for social justice.

See the March 3 issue of the News for a full story on Hinds.

One Response to “Presbyterian church gets a makeover”