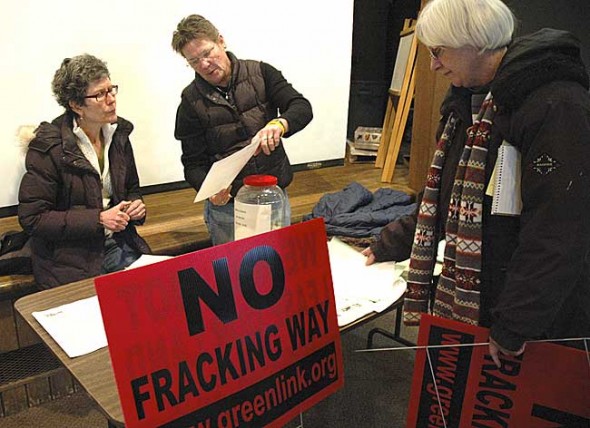 At a public meeting on oil and gas drilling, Vickie Hennessy of Green Environmental Coalition explained to Maureen Dawn how to educate her neighbors on the dangers of hydraulic fracking. (Photo by Megan Bachman)

Local residents are gearing up to educate themselves and the community about the potential hazards of oil and gas drilling after learning that Miami Township landowners began receiving proposed lease agreements from a Michigan-based oil and gas company two weeks ago.

The residents are especially worried that drillers would embrace a controversial drilling technique, known as fracking, which has been linked to the contamination of water supplies with chemicals that may cause cancer. West Bay Exploration began prospecting for likely drilling sites in six counties in Southwest Ohio last fall.

“What kind of economic benefits are worth the destruction of the environment, for life?” asked Dimi Reber, who was among 60 people who attended a Green Environmental Coalition meeting last Saturday, with many expressing concern that fracking, also called hydraulic fracturing, might be used to drill for natural gas in the area.

But Pat Gibson, West Bay’s vice president, said in a telephone interview before the meeting that fracking would not be used since the company is looking primarily for oil and that the local reservoirs do not need to be fracked to produce fuels.

Local geologist Peter Townsend said he was encouraged that the company would only do conventional oil drilling — and not gas fracturing — in the Yellow Springs area.

“I believe they would look for oil, it’s the logical thing to look for in this area,” he said.

Initial seismic testing of underground oil reservoirs last November by West Bay Exploration along West Enon and North Fairfield Roads just north of Yellow Springs yielded “promising” results, according to Gibson. The company plans to return for more seismic testing on roadways and property in the next few months.

“That area of Ohio as far as we can tell hasn’t been tested and there is no existing production,” Gibson said. “We are looking at a very broad area and it’s very high risk.”

Jon Paul Rion, a lawyer who owns eight acres along North Enon Road west of Fowler Road, received an offer to lease his land for drilling. West Bay offered royalties of one-eighth the income generated from any oil and gas well drilled on his property, or a neighbor’s property if part of a drilling unit. The royalty is estimated to be $4,489.50 per acre per year for a 160-acre drilling unit if the well produced 175 barrels a day and oil was selling for $90 per barrel, though Gibson said those production figures might be optimistic.

Some local residents claim that if fracking is done — a process in which water and chemicals are injected at high pressure to break up rock reservoirs so more oil and gas can be extracted — it may inadvertently contaminate underground aquifers and surface water with hydrocarbons and cancer-causing chemicals. While fracking is used in 90 percent of all oil and gas wells drilled today, opponents contend that it is especially dangerous when used to extract natural gas in combination with modern-day horizontal drilling, where wells are drilled at an angle to access more source rock.

Gibson said, however, that fracking is not needed because “these reservoirs in Ohio and in Michigan [that we’re looking at], they are naturally fractured, so there’s no need to do hydraulic fracking…Initially we’re not drilling horizontally.”

Townsend, a former Antioch geology professor, said in an interview that the company is likely looking for oil contained in large underground caves within the Trenton-Black River formation, which is locally about 1,400 feet deep and extends into Michigan. Since 2008 West Bay has drilled 28 oil and gas wells in the formation in southeastern Michigan and is in the process of drilling 30 more, according to a letter sent with lease agreements.

“Gas extends over huge areas and the shale below us has no possibility of producing huge amounts of gas,” Townsend said at the meeting. While natural gas may be captured and delivered to local utility lines as a byproduct of oil production, it will likely not yield huge quantities, Gibson said.

Townsend ran an oil and gas consulting firm in the early 1980s that drilled an unsuccessful exploration well in the formation. The reservoir into which Townsend’s well was drilled on the Pitstick Farm on West Enon Road was too tight to yield significant amounts of oil.

Meanwhile, concerned villagers have been going door-to-door to educate Miami Township residents on the dangers of drilling, especially if fracking is used, and advise them to seek legal counsel before signing any lease agreements.

“Don’t sign a lease without talking to a lawyer, because even though they say they’re drilling for oil, you don’t know in the future,” said Vickie Hennessy of Green Environmental Coalition, referring to the fact that generic leases may allow the companies to use other drilling techniques later on. Instead, Townsend recommends landowners wishing to lease their land draft their own lease agreement protecting themselves from potential contamination on their property and assuring they get the most money for their lease.

Townsend, who owns 14 acres outside of the village, said that if he were to lease his land for drilling, he would exclude fracking and natural gas exploration in the shale formation, require the removal of brine, a waste produced during drilling, and specify that the lease couldn’t be re-sold to another company without an additional acreage fee.

While oil drilling may disturb his property with, for example, increased truck traffic, Townsend said at the meeting that he can’t reconcile driving a car while “absolutely refusing to participate in the oil economy on the side of production.”

Rion, who has an additional 167 acres held in a conservation easement across the street from his property on North Enon Road, said that he would never lease his land for oil and gas drilling.

“I think it’s a threat to the community,” he said in an interview. “If a person can’t drink their water or irrigate their fields, these are damages that can’t be repaired.”

“We’re against it, we’ll stay against it and we’ll do everything in our powers to keep it out,” Rion said at the meeting.

“It’s absolutely within a land owner’s right, if they don’t have an easement, to sell those mineral rights,” said the land trust’s Krista Magaw. “We want to make sure they get full advantage of it and understand the experience if they continue to live on the land. It’s also a good time if landowners are thinking about leasing to think about other options to get value out of their land, like easements.”

Across the nation, citizens, communities and environmental organizations have recently pushed for more regulation of fracking, which has been practiced for 60 years but has been increasingly used in Eastern Ohio, Pennsylvania and New York to extract natural gas from formations known as the Marcellus and Utica shale. So far only 40 gas wells have been drilled in these formations in Ohio and two have been horizontally drilled.

Geologists at the division maintain that the practice is safe, since no groundwater contamination has taken place in any of the 80,000 fracked vertical wells in Ohio, and strict state regulations mandate cement casing within a well to isolate underground aquifers from the fracking taking place several thousand feet below them. Also required are site remediation when wells stop producing and proper wastewater disposal. There are 170 deep injection wells where wastewater can be properly disposed.

“The whole key to fracturing is good casing cemented into the hole, good containment of the fracture fluids and good disposal,” said Mike McCormick, a geologist at the Division of Mineral Resources Management. To ensure safety, his division has hired additional inspectors after receiving an increase of funding through an Ohio Senate bill passed last year that levies additional fees on the oil and gas industry.

Further, oil and gas companies designed the fracking process to avoid breaking into surrounding formations, such as aquifers, since they would contaminate the fossil fuel reservoir and lose the company the millions of dollars they invested in the well, McCormick said.

“If it goes into surrounding formations, water could flood their well,” McCormick said. “There’s no incentive for that at all, so they will design the fracturing job to keep it within the shale.”

If the next round of seismic testing is successful, then West Bay would have to secure a 10-acre drilling unit, provided they are drilling between 1,000 and 2,000 feet using a vertical well. To drill between the surface and 1,000 feet just one acre is needed and 20 acres would be required if the target formation is between 2,000 and 4,000 feet deep. The minimum distance from the vertically-drilled well to a property that has not signed onto a drilling unit is 100 feet, provided that the well is less than 1,000 feet deep, while 230 feet is required if drilling between 1,000 and 2,000 feet.

Next, West Bay would need to obtain a $500 drilling permit from the division, which takes between 10 and 21 days but can be issued in as little as seven days if expedited for an additional fee. Inspectors from the division are on-site during the installation of the steel casing and several other times during the process to ensure compliance with state laws.

West Bay’s Gibson said that after leases are signed and additional seismic testing is complete, an exploration well could be drilled by the end of this year.