The Village is exploring the technical requirements for a 2 to 5 megawatt solar photovoltaic array that may be built in the Village. In a conference call this week, plans were made to study the Village’s electric distribution system before Council discusses SolarVision’s proposal at its March 22 meeting.

On the call was Village Manager Mark Cundiff and representatives from AMP SolarVision, MeLink and Yellow Springs Renewable Energy.

In a presentation to Council on Feb. 22, SolarVision said they would finance, own, maintain and insure the array of solar photovoltaic panels if the Village would agree to a 20-year power purchase agreement with the company and provide or procure the land for the solar panels. In return the Village would receive an up-front payment of $200,000 for each megawatt of power contracted, which could be used to purchase property for the solar array or, if Village-owned land were to be used for the project, for its General Fund.

AMP agreed to complete a study of the Village’s electricity loads and rates and make a suggestion about the optimal size of a solar photovoltaic system, according to Jamie Albert, project manager for SolarVision, in his notes of the meeting. Yellow Springs will also find an independent consultant to verify the initial suggestion from AMP that a 2 megawatt system (which would cover 12 acres and meet about eight percent of the Village’s current electricity consumption) is the maximum that the Village could handle. 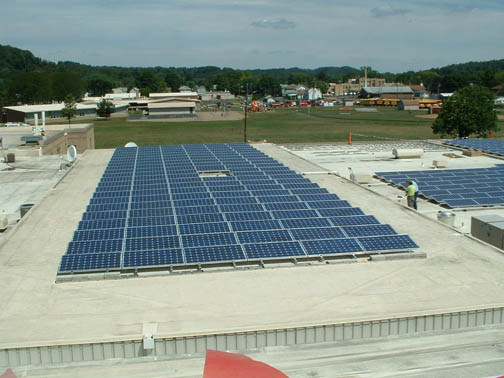 Albert also indicated that  SolarVision is looking to AMP’s recommendation on system size, that doing what is safe for the Village is its top priority and that they will design the system so that there is no excess electricity produced from the system.

In his notes from the meeting Cundiff added that SolarVision would cover the cost of any sub-station upgrades needed to accommodate the solar farm and said they would be willing to discuss sharing the cost from a load-flow study of the Village’s sub-station and system.

See the March 3 issue of the News for a full story of the SolarVision proposal.