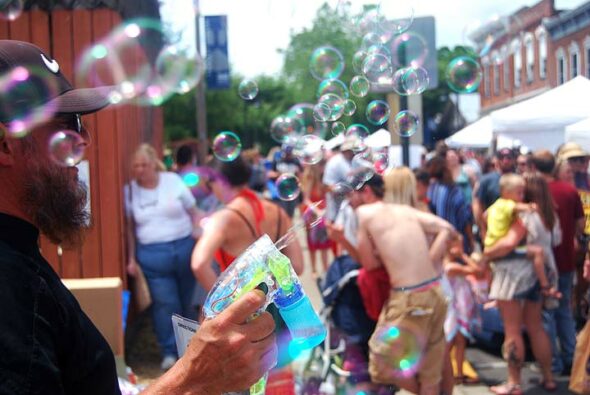 After a hiatus of more than two years, Street Fair is back.

Yellow Springs’ regionally renowned festival of commerce, crafts and carousing is scheduled to return this Saturday, Oct. 8, from 9 a.m.–5 p.m. The event will include two music stages, a beer garden, live street performers and more than 250 vendors throughout downtown area.

The last five scheduled dates of the semiannual fair — typically held the second Saturdays in June and October — were canceled due to significant transmission rates of COVID-19 in the region and state.In an interview earlier this year, Yellow Springs Chamber of Commerce President Mark Heise told the News that the last Street Fair, held in October 2019, brought an estimated 26,000 visitors to the village. At the time, he said he expected this year’s event to bring even more folks.

Despite Street Fair’s growing popularity, the day-long extravaganza has home-grown and humble roots. According to YS News archives, the event began as a summer sidewalk sale in 1963. Early sales would bring villagers and downtown shopkeepers out on the pavement to trade and sell knickknacks and doodads of all kinds. As the annual summer sale grew, a second eventually cropped up in the fall.

While the shape and size of Street Fair has changed over the decades, the spirit of the original sidewalk sale remains. It’s still a semiannual day for villagers and visitors alike to smile, share and shop.