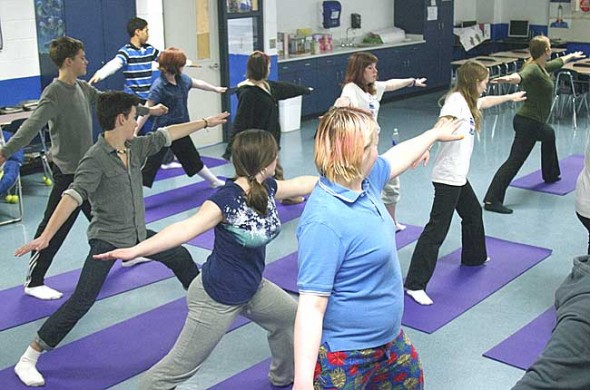 This month local yoga instructors Jen Ater, above, top right, and Gail Lichtenfels launched a program to teach yoga in village public schools. Shown above are McKinney Middle School students at a yoga class this week. (Photo by Sehvilla Mann)

Young minds, bodies take to yoga in the schools

A group of 19 students sits cross-legged on purple mats in Sarah Lowe’s classroom at McKinney Middle School. It’s 9 a.m. on a Tuesday morning, and they’re just beginning their first class of the day: physical education. Instead of chasing balls or running laps in the gym, though, they’ll be spending the next 50 minutes practicing yoga with local instructor Jen Ater, the co-creator of a new program that aims to bring yoga to the village schools’ physical education curriculum.

The students, all in eighth grade, listen while Ater asks if their perception of yoga has changed since they began the program several weeks ago. Ahmad Wagner, 14, raises his hand.

“I guess it gets better in a way, because once you do it more, it gets better…it helps loosen the soul, in a way,” he said. With this in mind, Ater has the students lie down on their mats to begin a series of relaxing exercises. Later they’ll move on to more active, standing poses, then cycle back to calming postures to end the class.

Ater conceived of the idea for a yoga-in-the-schools program with fellow longtime instructor Gail Lichtenfels, also of Yellow Springs.

“We got together in August with this vision of: what if?” said Ater in a recent interview at her studio.

“We both share a passion for yoga, we’ve both seen benefits in our lives…and want to spread the word,” said Lichtenfels.

The two yogis caught wind that a local family foundation was interested in giving funding to a large-scale community project, according to Ater. Together with this private organization, which prefers to remain anonymous, the two created the Yellow Springs Youth Yoga Project. Classes started at the Yellow Springs High School, McKinney Middle School and Mills Lawn Elementary at the beginning of February.

At Mills Lawn, where students take P.E. twice a week, instruction will probably take the form of two eight-week units of yoga, and kindergarten through sixth-grade students “will have access to yoga once a week.”

At the middle school level, seventh through ninth graders will take a yoga class weekly for the duration of the program, and they can also opt into an additional class once weekly. Students in tenth through twelfth grade can choose yoga from among several elective P.E. options. Lichtenfels and Ater are also offering “targeted after-school programs” for students, and classes for teachers and school staff.

Envisioning yoga’s place in a P.E. curriculum may require a shift in thinking about what constitutes physical education, said Lichtenfels.

“Yoga’s not exercise as most people think of it,” she said. Instead of winding someone up, “yoga creates calmness. It’s fundamentally different from aerobic exercise.”

However, both she and Ater firmly believe that adding yoga to P.E. programs will positively affect students’ well-being in more than one way.

Ater spoke of the “educational benefits, emotional [and] mental benefits” students might gain from practicing yoga. For a high school student, she said, “It’s important to think about burnout and sustainability.”

She hopes the program prompts teens to ask questions such as, “What sustains me? What makes me feel good?”

“We start to change our thinking to be a healthier way” when practicing yoga, she added. A student who has begun to take his or her own wellness seriously may think twice about drinking a giant, highly caffeinated soft drink to get through a project. With increased mindfulness not only of their own condition but that of the larger group, she suggested that students might also begin to reflect on their behavior more closely, asking of their actions, “How is this going to impact our community?”

“It gives them the opportunity to learn about themselves,” said Lichtenfels. “It develops that intuitive process.”

The two women have derived their teaching materials from a variety of sources, but most heavily from one particular set of lessons, a “science-based curriculum which pairs national P.E. standards with yoga principles,” said Ater. “It takes the question, ‘is yoga religion?’ out of the equation.”

The lessons have been crafted in such a way that teachers can have confidence that the instruction they present is “sound,” she said. (More information about the curriculum can be found at http://www.yogaed.org.)

Ater and Lichtenfels don’t plan to rigidly adhere to any one program; they said they are taking a “loose approach” to the classes.

“I’ve been playing music, [and will] maybe incorporate more upbeat music themes” in the future, said Ater. Lichtenfels, in her classes at Mills Lawn, has been including “storytelling, singing, any sort of imaginative thing because then you have their attention,” she said. “There are a lot of things you can do with yoga that aren’t just postures.”

When they do work on poses, Ater said, she is impressed by the students’ ability to carry out some of the ones adults find difficult.

“What’s really fun about working with kids is their bodies are so supple,” she said. By contrast, Lichtenfels said she has seen students, including accomplished athletes, surprised by the effort required of them. When they find themselves challenged by yoga, she hopes it will lead them to think that “maybe there’s something to this,” she said.

So far the program has been warmly received both by students and educators. “We’re actually getting a lot of great feedback,” said Ater. “I think we’re kind of surprising them that yoga can be fun.”

The schools’ P.E. teachers, who were an “integral part” of creating the program, are also thrilled for yoga to join the curriculum, said Ater. The school is bucking an unfortunate trend: rather than expanding their offerings, many schools have reduced their P.E. programs in recent years to save money.

The funding which the Youth Yoga Project has received will allow it to continue through the spring of 2011 and through the entire academic year of 2011–2012.

“We’re excited to see at the end what we’re able to create,” said Ater.

Lichtenfels said they aspire to conduct at least “phenomenological research” into the program’s effects, meaning that at the end of the program they will ask the students how it has benefited them.

Ater, who is currently finishing a masters degree in yoga therapy from Antioch University Midwest, hopes to include what they learn in the creation of her capstone project. They may also try to publish a paper in a peer-reviewed journal, thus adding to a growing body of literature which examines the effect of yoga as it is applied everywhere from breast cancer clinics to Veterans Administration hospitals.

For the present, Ater and Lichtenfels are focused on spreading the word.

“That’s the challenge for high school students,” said Ater. They hope to soon have a Web site up and running; work on a Facebook page is underway too. Those interested can also contact Ater directly at jen@innerlightwellness.net or 319-4291, and Lichtenfels at 830-7168 or gail.lichtenfels@wright.edu.