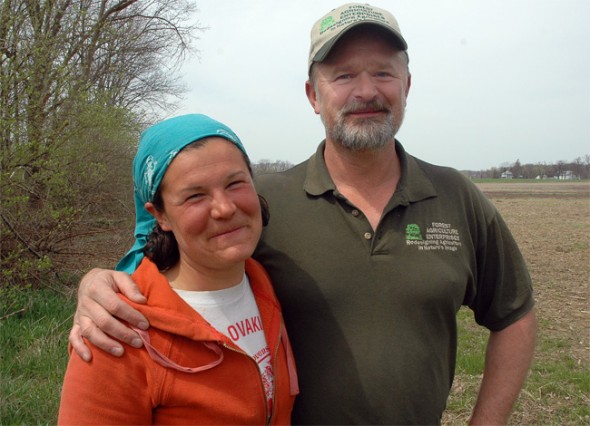 Mark Shepard, a Wisconsin-based permaculture teacher and farmer, enlightened the crowd at the Glen Helen Building with his radical food-growing ideas, like designing perennial polycultures of trees and shrubs instead of energy-intensive annual crops. To Shepard, the ideas are not radical, but practical and economic.

“Most of the permaculture movement in the U.S. is focused on suburban gardening,” Shepard said in an interview last week. “But we eat stable food crops and those come from large farms. Until we’ve transformed agriculture into perennial agriculture, we’re not getting anywhere.”

The talk was sponsored by the Tecumseh Land Trust, which has been hosting local food events to foment local efforts.

Shepard has set his sights on seeding industrial-scale permaculture operations as an economically-superior alternative for monocropping farmers. To do so, farmers would re-create a savannah-like ecosystem, planting trees like hazelnuts, chestnuts and walnuts followed by smaller fruit and nut-bearing trees and shrubs. By layering, or “stacking” the plants, farmers can get six-and-a-half acres of production out of one acre of farmland, Shepard explained at the meeting.

Suburbanites should “plant a jungle in their front yard” rather than going to meetings on environmental issues and blogging about it, Shepard said. And they should also connect with a permaculture farmer to grow their staple crops.

Local farmer Amy Batchman hosted Shepard on Saturday for a design-intensive on her property on West Jackson Road — home to the new Radical Roots Farm — and will be following Shepard’s advice.

A local food revolution may coming, according to Batchman, and Yellow Springs, which has hosted four of the nation’s top permaculture experts in six years, is hoping to lead the way.

For more information, see an upcoming article in the News.