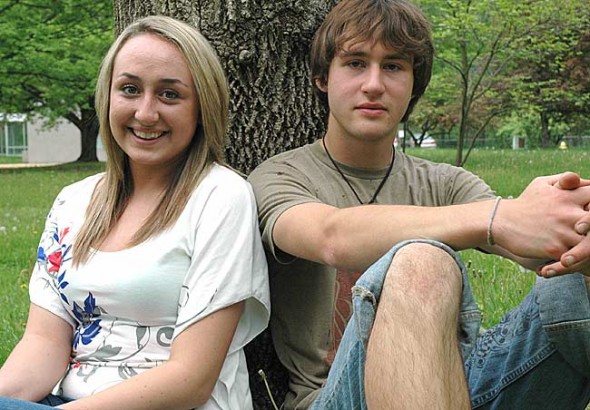 YSHS seniors Elise Giardullo and Gabe Amrhein will host a 24-hour relay “A Promise to Eben: No Text Is Worth Your Life,” to raise awareness of the dangers of driving and texting. The event takes place Saturday, May 28, at the high school, beginning at 9 a.m. (Photo by Lauren Heaton)

When loved ones think of Eben Wildman, they often think of his wide smile and bright blue eyes, according to his mother, Sarah Wildman.

“He had a kind heart, a lot of energy and a ready smile,” said Wildman, who works as the Village economic sustainability coordinator. 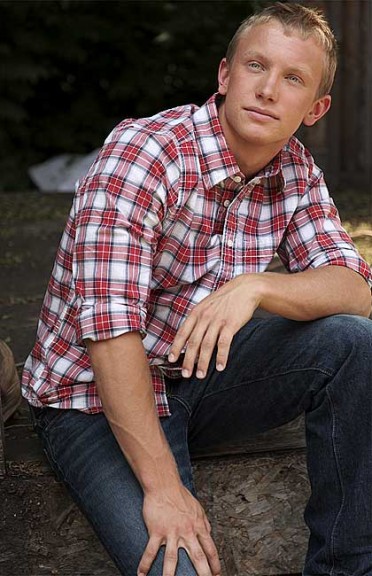 But Eben, then a sophomore at Miami University, died on Oct. 16, 2010, when his car swerved on State Road 343 about a mile and a half out of town, when he was returning from a party in Columbus to stay the night with his mother in Yellow Springs. Evidence found at the scene indicates that texting was the cause of the accident.

The loss of a young life is always tragic, but two local young people hope to find meaning in that tragedy. The meaning sought by Elise Giardullo and Gabe Amrhein is their attempt to save other lives by educating young adults on the dangers of texting while driving.

“Even though Eben’s gone, he can still make a difference,” Giardullo said in a recent interview.

Giardullo and Amrhein, both seniors at Yellow Springs High School, have fashioned as their senior project “A Promise to Eben: No Text Is Worth Your Life,” a 24-hour relay aimed at raising funds and raising awareness of the dangers of driving and texting.

The idea for the project— all YSHS seniors are required to do a community service project — came to Giardullo not long after Eben’s death, she said. Last fall, Giardullo and her parents were arguing with her about her own practice of texting while driving, when she heard about the death of Eben, who she had met briefly and immediately liked. She attended his viewing, where Eben’s family had on a table a stack of pledges for people to sign, promising to never again text while driving.

“It hit a chord in me,” Giardullo said, “that they’d think of this in their time of tragedy.”

Research makes clear that texting while driving can be deadly. According to an 18-month study of truck drivers by the Virginia Tech Transportation Institute, the drivers were 23 times more likely to have an accident when texting. A different study, focused on drivers of cars rather than trucks and conducted by the University of Utah, found that drivers were eight times more likely to have an accident while texting. The difference between the two studies may be linked to trucks being more difficult to maneuver and stop.

And according to the National Highway Traffic Safety Administration, 16 percent of all fatal crashes in 2008 were caused by driver distraction, of which texting is a main contributor. Texting while driving causes accidents because drivers tend to spend about five seconds looking at their devices, enough time at typical highway speeds to cover more than the length of a football field.

Yet kids do it anyway. According to Giardullo — who will never text while driving again — she knows hardly anyone in her age group who does not text while driving. While young people know the danger, they think they’re good at texting and that warnings don’t apply to them. And given the increasing prevalence of social networking technology, “kids feel they need to be connected to each other” at all times, she said, so that when a friend texts them, they need to respond.

Eben Wildman was by all accounts an exceptional and responsible young person; he served as president of his class at Southeastern High School, played baseball and football, was a member of the National Honor Society and the lead in both the junior and senior class plays. A dedicated skeet shooter, by age 10 he was a member of the National Junior Olympic Shotgun Team.

“He usually did the right thing,” Sarah Wildman said about her son. “But not that night.”

Giardullo and Amrhein are aiming their message not just at Yellow Springs High School students, but also students from Cedarville, Fairborn, Greenon and Southeastern High Schools, in order to spread their message to as many as possible. Accompanied by Wildman, Giardullo has visited several schools to speak to classes about the relay and to raise awareness of the dangers of texting while driving.

Giardullo and Amrhein also created a video to help educate young people, which they show during their presentations.

The final component of their project is the “No Text is Worth Your Life” 24-hour-relay, which will take place at Yellow Springs High School beginning Saturday, May 28, at 9 a.m. The teams will raise funds to be used for local scholarship programs, and also collect signed “A Promise to Eben” pledges prior to the event, modeled on those created by the Wildman family after Eben died.

The project seems to be bringing together the talents of Giardullo and Amrhein, according to Sarah Wildman, since Amrhein used his technical skills to produce the video and Giardullo is a strong communicator. Both young people have done an excellent job finding out what they need to say and creating a way of saying it, she said.

And she finds comfort in a project that seeks to help other young people avoid the tragic accident that took the life of her son.

“This project has a lot of meaning,” Wildman said. “There’s no way that Eben’s lost future can be brought back. But at least there’s some legacy, since Elise and Gabe are finding a way to use the accident for a good purpose. That’s very important to me.”