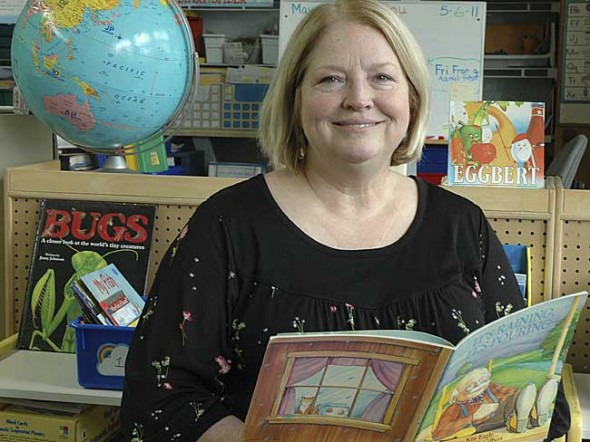 Shanna Winks will retire next month after 36 years of teaching at Mills Lawn school. (Photo by Lauren Heaton)

Shanna Winks knows things about each of her first, second and third-grade students. One of them likes to dance, and another knows a lot about how to raise farm animals. One of her students has trouble seeing and another falls asleep easily. These things are important, Winks believes, because in order to serve every child’s individual needs, a good teacher needs to see each child as an individual.

An elementary school teacher at Mills Lawn since 1975, Winks is a quick study with her students, most of whom are ready to share everything about themselves on day one, she said. So she listens to them intently, for a few minutes, and then she zeroes in on her mission. As the district’s Title I program coordinator, Winks aims to make sure that every child in the school, by the time they reach the third grade, knows how to read.

“I’m a bit of a perfectionist, and I’m always searching for a better way — I look at my students and think, ‘what can I do,’ and ‘what do they need?’” she said in an interview last week.

Winks runs the Reading Center and is responsible for tracking the individual progress of about 40 students, who get pulled out of their regular classrooms for about 30 minutes of supplementary reading instruction each day. With the help of Lillian Slaughter, who tracks the second graders, and reading instructor Paula Cordell, the Title I team’s goal is to intervene at the earliest stage possible so that students don’t fall behind.

“All the research shows that the earlier the intervention occurs, the better the intervention,” Winks said. “And if by third grade, a child is not reading at or above grade level, that child will have difficulty learning. That’s why when my kids come in, we get going!”

And often she witnesses moments that let her know the program is working. Last month during class, Winks heard a particularly challenged student reading aloud.

“He finished reading, and he looked at me and I looked at him and he said, ‘Ms. Winks, I read this whole book and I didn’t miss one word!’” she said. “That’s why I do this.”

Winks came to Mills Lawn in 1975 to take her first job as a first-grade teacher in the town where she lived with her husband, John, a Yellow Springs police officer. Scared at first that she might do something to harm her students, after working with strong mentors such as Betty Felder, Doris Kintzel, Marlene Drummond and others, she found she loved helping children to discover their own capabilities.

“I love being with children all day as they learn and say ‘well, I CAN do this!’” she said last week. “Seeing the thrill, the pride in their faces — I can’t imagine doing anything else.”

By the 1990s, she realized that she was good at one thing in particular: helping kids learn to read. So when former Title I coordinator Vickie Harper died, she stepped into that role, and as a tribute to her colleague, put all of her energy into ensuring the program was making a difference.

She used her program stipends to buy hundreds of books and regularly stayed at school into the evenings planning the next day’s lessons and analyzing grades, test scores, and other data needed to maintain eligibility for Title I funding, she said. And she continued her own education by reading books and attending classes to find new ways to give her students what they needed. She often recalls from one of those lessons, a quote by an educator who said that a teacher is the decisive element in the classroom.

“He said that as a teacher, with the tone of my voice or the look in my eye, I can either be an element of joy or an element of dread in my classroom,” Winks said. “I always remembered that, and it shaped how I approach working with kids.”

While individual attention is a must, Winks has also learned that all children have many things in common. Almost all children love stories, such as one student who was fascinated by a story about a family of pigs and wanted to share it.

“She came up to me excited and said, ‘Mrs. Winks, did you know that a boy pig is called a boar? And I know they’re going to tell me the girl’s name too, but I can’t read all the words!’”

Another truth Winks has learned is that all children need to feel welcomed and safe in order to be able to take risks and learn new things. Teachers also need to be able to observe the individual interests of their students and seek information to fuel those interests, Winks said. One of her students grew up on a farm, but was self conscious about being different. So Winks initiated “farm day,” when the student got to teach his peers all about the animals he took care of.

Seeing deeply into students lives is easy for Winks, who “never met a child she did not like.”

“That’s the honest to goodness truth,” she said. “Did I have children with needs? Yes. Did I have children that kept me up at night? Yes. But when you’re young, you just naturally have a sweetness and innocence about you…and in order for children to learn, they’re going to try things behaviorally, and that never bothered me.”

Her love for her students never meant that she expected less of them. She encouraged them to express their feelings and insisted that they treat each other with respect, largely by modeling that respect with both students and colleagues.

Winks approaches the end of her teaching career with reluctance, but she also wants time to do other things, and plans to start this summer by taking a month-long trip with her husband to the Grand Canyon. She has loved her working life and appreciates every relationship she has made with students, parents, teachers, principals and superintendents over the past three decades.

“I like teaching so much because they teach me so much,” she said. “I really feel privileged that I’ve been able to work here for 36 years.” 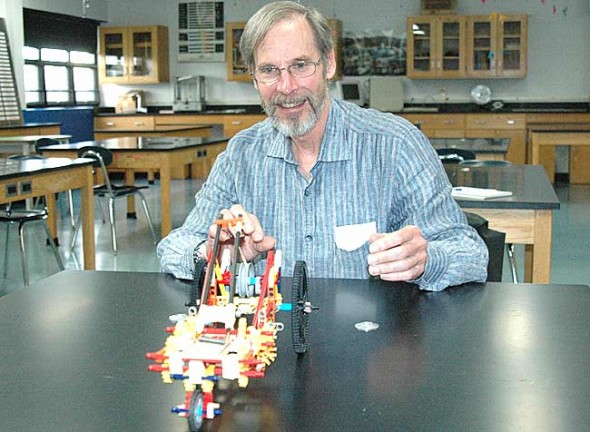 Like many of the students he has taught over the past 30 years in Yellow Springs schools, Phil Lemkau learns best by doing. He learned physics that way, motivated by curiosity to teach himself through trial and error about the science of motion. For someone who was born to tinker, physics turned out to be a great fit for him.

“I started out teaching science and shop at the middle school and high school — I taught that for close to six years before I picked up physics here,” Lemkau said in an interview last week. “It was fun because I didn’t really know much about that field.”

But his early physics students helped him, he said, to transfer his training as a zoologist and builder to a science based on math and motion, and he started having the time of his life.

The evidence of his journey decorates the shelves, lab benches and the ceiling of his classroom at Yellow Springs High School, where mouse trap cars, matchstick building models, an antique propeller and the wing of a small biplane are displayed. Each is an example of some rule of physics. Take the electric motor, for instance, which in its simplest form, powers most of the modern world, Lemkau said. The motor operates through the unusual relationship between electricity and magnetism, which when applied together create a perpendicular force that makes objects rotate. He demonstrated the principle with several motors made by former students, such as one by Asha Morgan and Corinna Keller in 1988.

Though the motors were made by advanced students, physics doesn’t have to be complicated, Lemkau said.

“Just walking around is physics, acceleration is something we all do naturally,” he said. “Physics is just cool that way, and if you like to tinker, it’s just beautiful because you can always put something together” to practice and test the scientific theories.

Lemkau’s students have found success with his methods too, and he has helped to lead several teams to the national level of the annual Test of Engineering Aptitude, Mathematics and Science (TEAMS) competition, one of which took second place in the nation in 1997 and one which took third in 2002. Several of his students have also chosen to pursue physics as a career.

But as a true academic, Lemkau knows that no science is complete without the philosophy that balances it, which is why he also keeps on a shelf in his classroom a stack of poetry and inspirational quotes that one student brought to physics class each day last year. The students read the works of historic and contemporary writers and philosophers from around the world, sometimes discussing them, and sometimes not.

“We shared these quotes of inspiration every day, and we hung them up on the board,” he said. “That class was ­outstanding.”

Philosophy is critical to the scientists, who will at some point have to grapple with how to apply their skills, Lemkau said. Scientists are needed more than ever to figure out how to solve the world’s oil shortage and the environmental threats that current production methods pose, he said. And contemporary particle physics is such a complicated and highly specialized field that the bigger picture can easily be lost if those in it don’t have a broad perspective about the world they live in, Lemkau said. As well as a love of learning, Lemkau hopes that his students leave his class appreciating the privileged life they lead. They are lucky to have access to modern electronics, and if having a better understanding of how the tools and gadgets function increases their appreciation, Lemkau feels that his class is worthwhile. It could also give someone the very practical skill of fixing a lamp when it breaks, too, he said.

“I’ve loved teaching here, it’s been a lot of fun — and if I’ve generated some interest in the field, then it’s been worth it.”