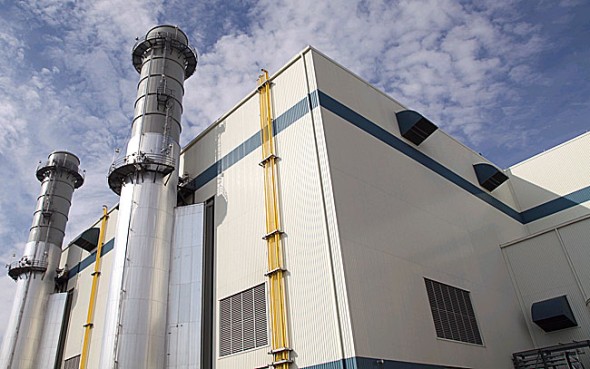 The combined-cycle natural gas power plant, opening in Fremont, Ohio, in early 2012, will be owned and operated by the Village’s municipal power provider, AMP. (Submitted photo)

Village Council will consider purchasing power from a new natural gas plant at its June 20 meeting in yet another decision affecting the town’s electricity portfolio and its carbon footprint.

At Council’s June 6 meeting, villagers raised concerns about the planned long duration of the contract with AMP for the gas plant, the possibility of environmental damage from the fracking technique used in some natural gas drilling and how the agreement may limit the Village’s ability to add more renewable energy to its portfolio. Council has been focused in the last few months on energy issues, deciding to purchase power from a local solar farm and oppose fracking in an official resolution.

The combined-cycle natural gas power plant, opening in Fremont, Ohio, in early 2012, will be owned and operated by the Village’s municipal power provider, AMP, and would provide immediate power to the Village for 35 years.

At the June 6 meeting, AMP CEO Marc Gerken suggested that Village purchase 1.2 megawatts of power per year (which represents less than 10 percent of its total electrical load). But utility consultants Courtney and Associates recommended this week that the Village purchase just 500 kilowatts.

Except for a small amount from a Niagara Falls hydroelectric project, “the Village does not currently have any long-term, intermediate resources in its power supply portfolio,” John Courtney wrote in a report to Council. Courtney projected a shortfall of 1 megawatt of intermediate power by 2025, and suggested that no more than half of that come from a single energy source.

“When developing a power supply portfolio, we think it is best to diversify your resources,” Courtney wrote.

To Council member Lori Askeland, community concerns about the use of a non-renewable fossil fuel are valid, though it’s also important the Village maintain control over energy sources.

“The thing that still makes it appealing to me is rather than buying coal on the open market from profit-making energy companies, we would be buying this for ourselves — and having some control over it,” Askeland said.

Project participant committees oversee all AMP power projects, according to Kent Carson, an AMP spokesperson. Carson said that the project committee would definitely be looking into the sourcing of gas but that fracking, a process where water, sand and chemicals are injected in underground wells at high pressure to break up source rock, is not a major concern for AMP.

“[Fracking] is not something that AMP or anyone in our industry will regulate — those regulations will come from the right agencies,” Carson said.

But Askeland said that some villagers question whether adequate regulations to ensure fracking is safe will ever be developed. One such villager is Vickie Hennessy of Green Environmental Coalition, who this week testified to an Ohio Senate Committee on how fracking contaminates underground and surface waters with toxic hydrocarbons and chemicals that contain carcinogenic and radioactive materials. While other nearby states are placing moratoriums on the practice and ordering studies on its safety, Ohio has no plans to change how fracking is regulated, Hennessy said.

“It’s almost like Ohio has to experience some horrible disasters before it really becomes believable to the regulators — so far Ohio’s ignoring [the evidence],” Hennessy said.

Founded in 1971, AMP is a cooperative of 128 municipalities in six states, including 82 in Ohio. It’s run by a 19-member board of trustees composed of representatives from AMP member communities. Yellow Springs joined AMP in 1986, after being a member of its predecessor organization, the Ohio Municipal Electric Association, since at least 1970, according to Carson. The village has never held a seat on the board, nor have they been part of a project committee for an energy-generating plant, he said. But since becoming Village Manager, Mark Cundiff has had a seat on the AMP board’s environmental stewardship subcommitee.

Cundiff said AMP provides a service that would be hard to replicate as a small community.

“If not for AMP, then we have to have staff here that can go out and find and purchase energy contracts, deal with Dayton Power & Light and transmission issues,” Cundiff said. “We are AMP,” he added, since it is a cooperative made up of its members.

But sometimes AMP’s priorities don’t align with the village’s, especially since the community has become deeply concerned about climate change, according to Council President Judith Hempfling.

“We are a part of AMP, but their goals are different from our own,” Hempfling said. “Their responsibilities are to their members and their members don’t think the way that we do,” she added, since the village is often more forward-thinking and concerned about the environment than other AMP communities. But AMP is also proactive on renewable energy, Hempfling said.

AMP has the largest hydroelectric deployment in Ohio, at 400 megawatts, is developing 300 MW of solar and built Ohio’s first wind farm, according to Carson.

“AMP is very proud of its record in terms of responsible generation projects,” Carson said. “We also recognize the reality that renewables have to be part of a balanced portfolio.”

At its June 20 meeting Council will decide how much, if any, power to purchase ahead of an imminent deadline for AMP, which is in the process of buying the nearly-completed Fremont plant.