As you’re reading this (and I assume that everyone is), I am in New York City. It’s the fabled City That Never Sleeps, which is perfect for me, since having a child has made me the Person That Never Sleeps. ( I realize, by the way, that as parenting comedy goes, this is a tired joke; fair enough, as I am a tired person. That’s two for two, ladies and gentlemen!)

Admittedly, my experience with big cities is fairly minimal. I spent many of my formative years in a place that currently boasts a population of less than 400. My teenage years were spent in a suburb near a tourist beach, where the only historic building is a defunct antiques stores that once housed a performance from Hank Williams, Sr. I have lived in a few college towns.

I did visit Paris and Madrid when I was 17, but that was under the protective wing of high school chaperones and well-spoken tour guides, and the blissful linguistic ignorance that almost always required that someone else speak for me. Not until a few years ago, when my partner Anthony and I visited Chicago, did I experience the exquisite panic of planning even one day in a city whose size is beyond your scope. Don’t get me wrong; we had fun, but we did end the week being escorted in a police cruiser to the Museum of Science and Industry. It’s a long story, but suffice it to say the whole incident can be blamed on my attempting to traverse the City of the Big Shoulders based solely on my knowledge of the 1893 World’s Fair. 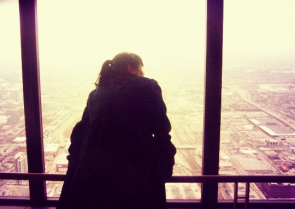 Looking down on Chi-town.

When we made the trip, Anthony and I were living two-and-a-half hours away from one another, and we talked on the phone as often as we could. A few days before I joined him in Yellow Springs to make the trip, we talked about the facelessness of living in a place where no one knows you. It was late, we had been talking so long my phone burned my ear, and I was lying on my couch in my apartment where I lived alone, in a moderate-sized city, where I knew a total of five people. “I feel pretty anonymous here,” I told him. “I can’t imagine what it would be like in a place that big.”

The night wore on, and Anthony introduced me to a term I’d never heard before: anomie. A beautiful, sad little word, as blank-faced as its definition; I invite you to research for yourselves all the interpretations of the term. I loosely take it to mean something like “untethered,” and in the context of our discussion, Anthony cited it as a psychological result of living so long without knowing or being known by other people. The more I thought of the word, the more I feared it.

As anonymous as I was when I lived alone, I was just as unknown when I moved to Yellow Springs to live with Anthony. It was easy to observe, as I walked down Xenia Avenue and in and out of stores and restaurants, that this was a place where a lot of people knew each other. As much as I envied this display of kinship, there was an equally sound part of me that reveled in my unfamiliar face, that wrapped itself up safe inside the fact that nobody had any idea who I was or what I was doing here.

Then, of course, I was hired by the Yellow Springs News. And I started answering the phones and writing e-mails to inquiring minds and talking a lot of nonsense on this blog. I’m still relatively unknown when I walk down the street. But there are some people who know my name now. There are even more people who know the name I go by at work, to keep from being confused with the other person here who shares my first name. And there’s something a little scary about that; I, like any other human person, have lots of ideas and opinions, and I’m now in a job that gives me an opportunity, in one way or another, to express them. There are many modern devices that allow people of our generation to say things that they don’t have to be held accountable for; anonymity has spread to every corner of the internet, for example, and lets you and me and everybody get away with a lot of things we wouldn’t get away with in the real, tactile world. But working face to face with people, and even attaching my photo to the top of this blog each month, means I am not hidden anymore, and as scary as the idea of anomie was, this might be scarier.

In truth, it’s an exercise in trust.

So I’m trusting you, Yellow Springs, to deal kindly, or at least justly, with me, now that there’s nowhere for me to hide. And please: don’t look down on me for how much candy I buy. I might say it’s not all for me, but it is.