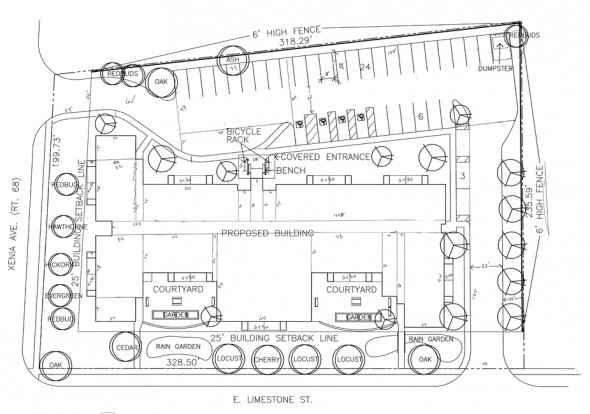 The Barr property on the corner of Limestone Street and Xenia Avenue has been slated for senior housing for at least three years, and it may still get it. On Monday, July 11, Yellow Springs Home, Inc. and project partner Buckeye Community Hope Foundation proposed concept plans for a 37-unit senior apartment building to the Village Planning Commission. The developers hope to get the property rezoned from residence B to planned unit development–residential (PUD–R) by November to be eligible for financial assistance from a tax credit program that uses both the private sector and the state government to benefit affordable housing projects.

The developers are proposing a two-story building on the 1.6-acre Barr lot with 37 one- and two-bedroom residential units that would rent for approximately $560 and $660, respectively, including utilities. The units are designed to serve seniors age 55 and over with income at or below 60 percent of area median income for Greene County, which would equal about $30,000 for a couple. The building would meet Enterprise Foundation’s Green Communities standards and is expected to cost about $6.25 million. Construction would be financed primarily through federal tax credits purchased by Ohio businesses through the Ohio Housing Finance Agency for use in affordable housing projects.

Home, Inc., which has experience developing mostly single residential units, brought in Buckeye because of the magnitude of the project and that group’s success in developing dozens of affordable apartment complexes for seniors across the region, Home, Inc. Executive Director Emily Seibel said during the meeting. According to Roy Lowenstein, vice president of Buckeye, his Columbus-based nonprofit organization has developed about 50 of these types of affordable developments for seniors, all using the tax credit finance model that he believes is a stable and proven method for supporting affordable housing.

Home, Inc. has been working on the project for over a year, according to Seibel, who feels that the community has a great need for modestly priced senior housing.

“The idea is a no brainer. You don’t have to be a market analyst to see that there’s a need for senior housing in this community,” Seibel said. “If you were dreaming up the ideal location, close to downtown and amenities to support independent seniors, you couldn’t find a better one than this. That’s why we have a better than average shot at being competitive [for the tax credit program].”

The plans followed most of the PUD zoning regulations except in the area of density. The PUD ordinance allows for a maximum density of 12 residential units per acre, and the current plan calls for a little over 23 units per acre. But plan board members generally agreed that they would consider allowing increased density for a project that serves a local need for affordable senior housing. Lori Askeland praised the project.

“I’m excited about this project,” she said during the meeting. “It feels like it has some energy with the investment of $6.2 million in our community, and it has a vital quality that will help sustain our downtown and help open houses for young families.”

Also during the meeting, Helen Eier and Suzanne Patterson, speaking for herself and for Andrée Bognár, shared enthusiasm for the project and faith in Buckeye as an experienced and energetic partner for Home, Inc. Richard Zopf reiterated that the community has long talked of the need for senior housing.

“The project for senior housing in Yellow Springs has been gestating so long that the mother has already died,” he said, referring to long-time advocates from the past who died before seeing results of their efforts.

Friends Care Community had previously attempted to develop a 30-unit $3.7 million senior apartment building on the Barr property, which had been gifted to Friends by the Morgan Family Foundation. The project won Village approval in 2009, but the finance model could not sustain the construction of the building, and the project was abandoned at the beginning of this year. Home, Inc. recently signed a purchase option with Friends to buy the property if the group is able to acquire the tax credit funding. While tax credits in Ohio are very competitive (this year the state funded 35 of the 116 that applied), Lowenstein feels that the local project has an advantage because of the walkability of Yellow Springs and the proximity of the proposed apartments to so many daily needs such as a grocery store, post office, drug store, banks and even a senior center.

Also the finance model, according to Lowenstein, is a good one whose strength comes from the regulative influence of both the government and the business community.

“It brings the discipline of the private sector into the affordable housing business, forcing us to do things that meet the needs of our investors,” he said.

“Instead of borrowing money and raising rents to support the debt, here you take an affordable rent and the government says we’ll give you a vehicle for raising equity and making it affordable for people of modest income,” he said.

The project must first go through the concept plan review process this fall, when the developers plan to apply for funding. For final approval, the project would then be subject to a final plan review with two more public hearings from both Planning Commission and Council.