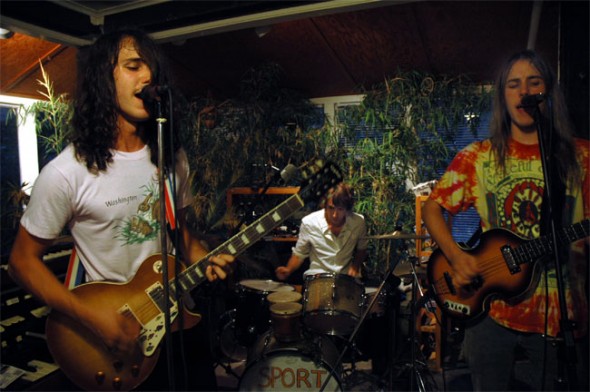 Sport Fishing USA is angling for its share of the Yellow Springs music scene.

The local rock trio has a bluegrass bassist, a drummer named David Bryne (no relation to the Talking Heads) and a front man with the hair of Jim Morrison and, literally, the guitar of Kim Deal of Pixies and Breeders fame.

“You can feel the legend of rock coming through it,” said lead singer guitarist Nathan Moore, 22, of the Dayton rocker’s historic ax. On the hair: “It’s great rock ‘n’ roll hair, but it gets hot.”

Sport Fishing USA started backwards. Wanting to record a set of songs he’d written, Moore enlisted his younger brother, Brendan, 18, to play bass and drums on the tracks and back up his vocals. When he decided it was time to play live, Moore added Bryne, 20, “the best drummer I knew.”

Their sound takes notes from Moore’s father, Chris, a local roofer and jazz cornettist who poured on 20s and 30s jazz tunes in their childhood, the 60s and 70s rock they played for themselves as teens and the 80s do-it-yourself rock they must have absorbed from the zeitgeist and Bryne’s father, an 80s punk rocker whose band toured with Black Flag. Brendan Moore, who plays bluegrass versions of Grateful Dead and Led Zeppelin songs with his other band Blue Moon Soup, adds that quintessential southern Ohio bluegrass sound.

Sport Fishing USA is Neil Young without the brooding and instead the sharp vocals the likes of Neutral Milk Hotel, perky drums and a Korg keyboard.

The songwriting stands out with songs that are poppy and catchy with a touch of nostalgia. In one number, Moore falls in love with Mary Susan and in the next, out of love with Elenanor — “1, 2, 3, 4/I don’t love you anymore/Elenanor” — in the band’s strongest musical statement.

Named after the literally-titled book by the U.S. Department of the Interior, Sport Fishing USA likes to have a little fun. In the song “Sport Fishing USA” the similarities between women and fish are explored.

“I don’t want to compare women to fish — but that’s what it sounds like in the song,” Nathan Moore said. The song is a summer anthem and brings back memories of the Moore brothers’ childhoods fishing on the Little Miami River.

Neo-psychedelica can be heard on the reverb-rich bridge in “Living on the Underground,” a song about a shut-in; “Red White & Blue” has a distinctly 60s feel, and across seven all-electronic tracks Moore demonstrates an impressive understanding of electronica, as in Brian Eno and Aphex Twin.

Sport Fishing USA plays The Werks music festival next weekend and is arranging fall dates at Canal Street Tavern in Dayton and the Clifton Opera House.

Their eponymous self-produced debut, with 17 original tracks, is available for free in its entirety from: http://sportfishingusa.bandcamp.com/

See an upcoming Village Vibes blog for a video of Sport Fishing USA.

8 Responses to “BLOG: Catching up with Sport Fishing USA”