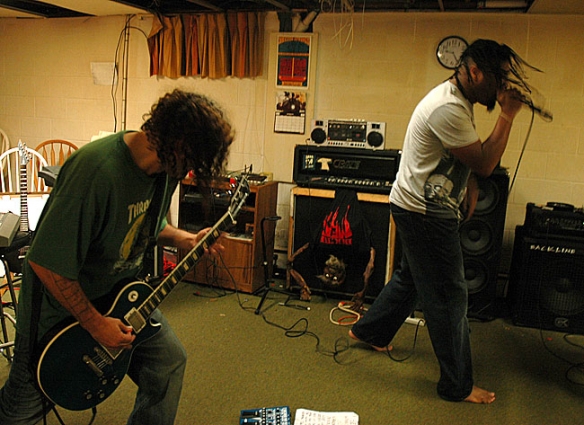 Halloween is Dr. Meat season. The Yellow Springs heavy metal band – named after an undead zombie butcher – is getting ready for a busy season of gigs around the dark and frightening holiday. But its members are quick to counter those who paint heavy metal as evil.

“Metal has this reputation for being nasty and evil, but we’re happy, high energy,” said Dr. Meat’s drummer Aaron Campbell in an interview last week.

The popular hardcore group, which also includes guitarist Bill Sykes and bassist Phil Seiley, has a new lead singer in Jared Whittaker and airing its new sound at upcoming shows at the Gulch on Oct. 9 and as headliner for the Zombie Walk on Oct. 22.

Dr. Meat holds down the harder and more explosive side of the local music spectrum, and, perhaps surprisingly, its musicians aren’t renegade youths but 30-something husbands and fathers. The group has a strong local following and is known for its high-energy shows.

“If you’re sitting down at one of our shows, you must be dead,” Campbell said.

Whether or not heavy metal is your favorite musical style, you have to appreciate the tight musicianship and high-energy punch of Dr. Meat. With influences like Anthrax, AC/DC, Rush, Jane’s Addiction, Primus, Slayer, Judas Priest and, of course, Metallica, the sound is as you might expect it, but the passion and precision of Dr. Meat’s delivery can be appreciated by any music-lover.

“Music has a lot more in common than people think,” said Seiley, who hears bluegrass guitar in Syke’s solos. Dr. Meat plays music like any other band, “just really loud,” he added.

Sykes and Campbell, who have been playing together for 15 years, formed Dr. Meat in 2006 and went on to produce two EPs and open for national act Suicidal Tendencies in Columbus. Along with Achilles Heel, another of Syke’s bands, Dr. Meat helped build a local metal scene in Yellow Springs.

Their local following has grown to many faithful “Meatheads” who attend – and mosh – at every show, and a good chunk of the community’s youth. Sykes recently autographed a box of Samoas for a young girl scout fan and is tickled to see 10-year olds wearing Dr. Meat t-shirts around town. As a sign of local support, about 50 local Meatheads chartered a tour bus to go to Columbus for the Suicidal Tendencies show. The Dayton following is strong too, even though sometimes people expect every band in Yellow Springs to sound like the Grateful Dead and wear tie-dyed t-shirts, Seiley said.

Whittaker landed the gig at lead singer after his first tryout – “He just started ripping it,” Campbell said of his first vocals. Whittaker has never been a front man in his 17 years of band experience, but it’s come naturally to him. At recent shows he grabbed audience members and yelled in their face.

“They loved it,” Sykes said. “It just made them mosh harder.”

Other types of music influence the band as well. Whittaker is also the one-man electronic act JFX316. Prior to joining Dr. Meat, bassist Seiley fronted several area hip-hop bands. And Campbell admits to a fondness for The Avett Brothers.

With the chemistry of a new band member, Dr. Meat has been churning out new material and the band plans to soon head to the studio to record. But first comes the eerie season of Halloween and some spine-chilling music to go along with it.