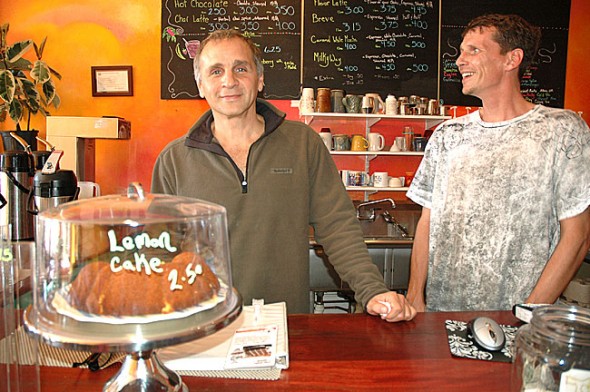 In coffee, it’s goats, not bears

According to the legend, coffee was discovered when an Ethiopian goat herder noticed his goats jumped and danced around when they ate the ripe red berries of a certain bush.

Michael Herington, the new owner of Dancing Goats Cafe at 118 Dayton Street (formerly Brother Bear’s Coffeehouse), hopes to induce similar bouts of excitement among customers with his caffeinated beverages and pleasant atmosphere. Herington, a Brother Bear’s regular, purchased the shop and remaining lease last month from Patrick and Mindy Harney, who sold the business to focus on their concert production company.

For the last two weeks Herington has been working double shifts behind the espresso machine at Dancing Goats Cafe to learn the business and reassure patrons that little will change under his ownership. Coffee and espresso drinks will still be made with Brother Bear’s locally-roasted beans, customers can rack up and redeem their rewards points, and signature drinks like the Carmella Mardella will be blended by the same familiar baristas, including the Harneys themselves.

Herington also plans to make Dancing Goats Cafe more traditional and comfortable, hoping to create an inviting space for people to chat with friends, do homework, hold meetings, have a snack, eat a meal, relax and sip on coffee, tea or smoothies.

“People hang out here for hours. Most coffee shops don’t generally like that, but I want people to use the space,” Herington said in an interview last week. Herington, who also owns the local guesthouse Elizabeth’s Overnight, quit his Cincinnati IT job to focus full-time on his local businesses and looks forward to a commute of just a few blocks.

“For me, it’s a nice lifestyle change,” said Herington, a Dayton native who has lived in the village for five years.

Patrick Harney, for one, is thrilled that he can still sell his coffee while being free from the hassles of ownership.

“People keep saying ‘I’m sorry to see you go’ but I will still be here and it will be my coffee,” Harney said.

Herington had been a loyal customer since Brother Bear’s opened in 2009 and last year started visiting area coffee shops and suggesting ways the Harneys might improve their business. He stepped in when running the store became too time consuming for the Harneys, who said the decision to sell was not financial. Herington was eager to keep them and the rest of the staff as employees.

“I want to keep the quality, the espresso knowledge and the professionalism,” Herington said. “That way you know you’re getting the best-made drinks.”

Herington has already added new baked goods and smoothies to the menu, with plans of expanding to breakfast sandwiches, paninis and soups. And he’s replaced the furniture with soft leather chairs and couches and designed a back room that can be used for meetings.

“It was like coming into my living room,” Patrick Harney said of the previous decor. “In one sense that was nice, but now it’s a bit more classy.”

The atmosphere remains largely the same. After a new door was installed by the building’s owner, Don Beard, even more light fills the space, highlighting a psychedelic mural of orange and pink clouds painted by Pierre Nagley that evokes a view of sunset from a mountain where coffee is grown.

Herington wanted to create a space where many different types of people felt comfortable and not assaulted by loud music or distractions. He said he hopes to attract a wide range of locals and tourists, all of whom are needed for his business to be successful, he said. Herington estimates about two-thirds of his business comes from those outside of town.

Even with three coffee shops in town, Herington said he believes there is room for everyone.

“We’re not competing with Dino’s, we just have a different space and environment,” he said. “We are an alternate as opposed to a competitor. He gets people who love his coffee, we get people who love ours.”

Herington said the extra espresso shot in lattes, cappuchinos and other speciality drinks continues to attract many customers to his shop. Popular among some locals is the Steal Your Face, a caffeine jolt that contains from four to eight shots of espresso. Others prefer the taste of coffee beans roasted fresh on the Funky Bean Farm just a few miles north of town. Brother Bear’s whole-bean roasted coffee, once sold in more than 80 area retail stores, is now only available at Dancing Goats Cafe. And everyone seems to appreciate the rewards program, in which customers receive $2 off for every $20 they spend.

Since becoming the owner, Herington has asked for feedback from his customers and regulars, even soliciting new names for the cafe. He also wants to learn more about tea quality, freshness and taste to expand that part of the menu and is open to other ideas.

Though Herington received many good suggestions for a new name (among them Grounds for Life, C U Latte, Roastbusters and Bean Me Up), he decided upon his own. The Dancing Goats name is fun and playful and a way to introduce the story of coffee, even though it is likely a myth, he said.

Herington also plans to bring back open mic night and weekend concerts, organized by the Harneys, who in 2010 started Funky Bean Productions to put on music concerts and festivals in the area. He also wants to increase the store’s hours, in part to accommodate Antioch students.

With his two local businesses, Herington is throwing in his lot with the Yellow Springs economy. For the foreseeable future he’ll be behind the bar at Dancing Goats Cafe, hearing from customers and brewing up their favorite drinks.

“I depend upon my customers,” Herington said. “I want to give them what they want, not what I think they want.”