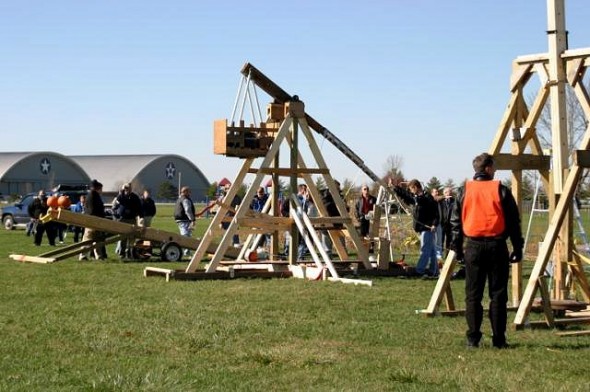 Pumpkins soar above the fields

The Mullin Family, a.k.a. the Mullin Marauders, was one of three teams featured in the first Midwest Pumpkin Chuck held at Young’s Jersey Dairy on Saturday morning. Using homemade trebuchets, each team launched three pumpkins into the wet fields behind Young’s to see whose pumpkin could fly the furthest.

The student team from Miamisburg won the prize for “best throw” with a 230-foot pumpkin launch. A second student team from the region won “most spectacular collapse” after their trebuchet exploded into dozens of pieces during a misfire. (Luckily, no one was injured.)

Meanwhile, Anna, Max, Caroline and Paul Mullin used Paul’s fixed-arm trebuchet for a 210-foot launch for third place. Then, for added fun, the family loaded a stuffed paper cow into their sling and hefted the heifer into the clear blue sky. They won a prize for “most entertaining launch”.

American Chucker, a team of Dayton residents and engineers from Wright-Patterson Air Force Base, sponsored the event. The team displayed the power of their own more highly mechanized trebuchets, which shot several pumpkins in a high arch past the 300-foot marker and into the farm field beyond. That team will go on to compete at the National Pumpkin Chuck competition in Delaware, Ohio at Thanksgiving. Their longest launch so far is 1,886 feet.

Here, the Mullins chucked their unground (faux) chuck for an encore launch: