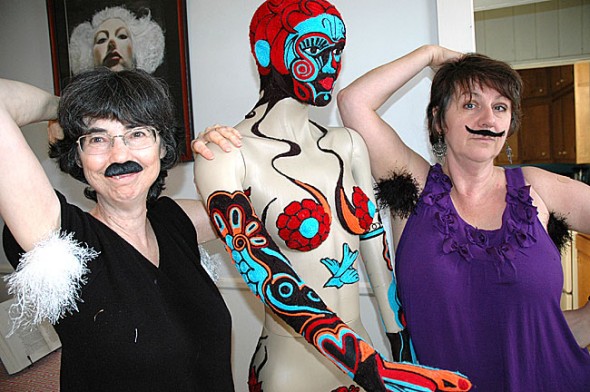 The JafaGirls Corrine Bayraktaroglu and Nancy Mellon open their Hairy Art Palace show during this Friday’s Third Friday Fling and Art Stroll, from 6 to 9 p.m. at the Arts Council Gallery at the Oten building, 309 Xenia Avenue. The gallery will be open during the weekend’s Artist Studio Tour. (Photo by Lauren Heaton)

Their art bristles with intent

Meet Hairy Mary, who wears instead of hair on her head and in her nooks, red, black and blue tattoos. She is both a symbol of the bruised concept of feminine beauty and a statement about the natural gorgeousness of a woman’s body. As both art and political messenger, Mary can afford to be radical. She is a mannequin, designed by activist and community artists Corrine Bayraktaroglu and Nancy Mellon, aka, the JafaGirls.

Hairy Mary is so named after the 18th century feminist Mary Wallstonecraft, whose treatise A Vindication of the Rights of Woman, is not likely to have included a chapter on a woman’s right to go with hair. But her essence was channeled after Bayraktaroglu discovered during a recent online chat that many people, including younger girls, not only believe that women should shave, but also believe that “hair down south is disgusting.”

“How can you be disgusted by something normal?” she asked during an interview last week. “That’s what women are, they’re hairy. People are hairy!”

She discussed the issue with Mellon, and as the two often do with issues they find intriguing, they made an interactive art project out of it. They made wads of fake armpit, pubic and facial hair out of fabric for people to put on in front of a mirror and pose with for a photograph. By confronting the matter head-on and making a funny out of it, they hope to inspire people to come together and talk about all kinds of issues that are important to supporting a community.

That’s how the JafaGirls have come to see themselves, as community artists who through public installations bring people together and help them reframe their assumptions and see things in new ways. Much of the art they have created together over the past eight years has done that, including the yarn bombing they started in 2008. Knitting trees and sign posts around the village took a traditionally indoor, private artform dominated by women and turned it out on the busy, public streets. It became a new form of graffiti, but one that ironically, Mellon and Bayraktaroglu found young men wanted nothing to do with.

Taking objects and ideas and turning them into something else is the theme of the JafaGirls upcoming installation of the Hairy Art Palace. So named after a dream Bayraktaroglu had, the exhibit will feature pieces from many past exhibits that have been turned into completely new artworks.

They mounted their nose photographs from several years ago, for instance with their papier maché noses in a new sculptural piece. Other installations will include new paintings, photographs, audio recordings and utilizing old pieces from the 2006 Chamber Pot Gallery, for instance, the 2004 Is It Art show from Center Stage, The Kiss, and an interview with Bitty the Dog.

As always, much of it involves humor. “It really only has a purpose if it’s going to make people smile,” Mellon said. And all of it fits into their original mission as community artists to promote art, promote the Arts Council, promote Yellow Springs, and have fun with art in the community, they said. Even the guest book will become an interactive piece of community art, which the artists will take home and alter and then give back to the community to see at a later date.

“It’s us playing together — us having fun together as a community,” Bayraktaroglu said.

“Those layers of connectedness make it richer — it’s the whole idea of you create something, someone you know buys it, then someone who owns it next alters it, and through that connectedness to the community, the art become precious,” Mellon said.