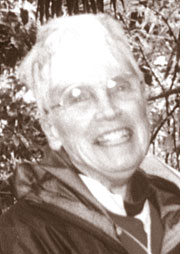 The second of four children, Barbara was born Sept. 10, 1925, in Oak Park, Ill., the only daughter of Burr Curtis and Frances Green Wilcox. She spent her childhood between Dundee, Ill. near Chicago, and Fairhope, Ala. She graduated from Radcliffe College in 1947, with a bachelor of science degree in biology, and pursued graduate studies in botany at the University of Hawaii. Soon after, she discovered Yellow Springs while job hunting from the Dayton area, where her parents were living at the time. She learned of Fels Research Institute, applied for a job and initially worked there for Leland Clark, and later, others. She met and married David Case in 1950. They built a house and settled in to raise four daughters.

Throughout her life in Yellow Springs, Barbara ardently pursued an ever-evolving intellectual life, which led her into a varied array of activities. She was a life-long supporter of local arts, as she incorporated her personal interests by joining with other like-minded friends in the community. She danced with Louise Soleburg and helped Louise teach modern dance to children, brought the family to Friday community folk dances led by Rex Barger and later danced with the Antioch Summer Arts program.

She became involved at the outset of the youth string teaching program, and helped create Chamber Music Yellow Springs, enjoying hosting concert performers for several years. She was inspired by early music through associations at Wright State University, and built her own spinet (she let her husband, a skilled craftsman, build the bench), which she played and performed with friends and local ensembles for several years. Her house was filled with many pieces of local art, both functional and decorative.

Early on, she met and became friends with Ken Hunt, director of Glen Helen, which opened opportunities for applying her training in biology. She became involved in many conservation projects over the years. She volunteered her organizational and botanical skills cataloguing vascular plants of the Glen, led hikes and joined her friend Nell Maloney in teaching student groups at Trailside Museum. She was a life member of the Ohio Biological Survey.

She pursued graduate mathematics and botany courses at Wright State University. While on that path, she worked for Berger Mayne at Kettering Research Institute. Later, she volunteered in the public school system in science classes. She found a calling in tutoring high school students in math, as her own grounding in number systems allowed her to explain math fundamentals that were often not easily grasped by students.

Travel became her passion in later years, taking her to many parts of the world, often involving adventurous modes of transportation. Among them were a Russian ice breaker in Canadian arctic waterways, and sailing trips on the Mediterranean, across the Atlantic, and in the Caribbean, inspired by David’s love of sailing. Some of her explorations were accomplished as Earthwatch projects, her way to put particular talents into action.

According to her wishes, there will be no memorial service. Donations may be made to Glen Helen.

One Response to “Barbara Case”