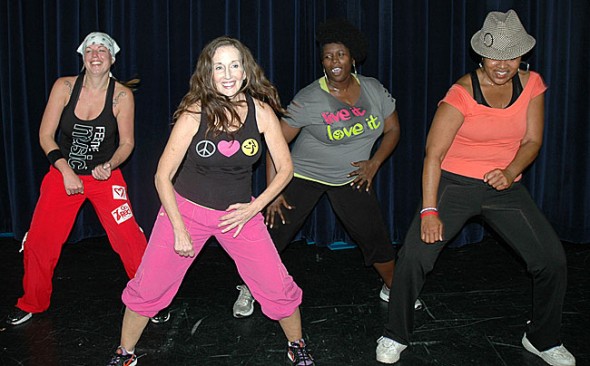 Zumba instructors Melissa Vanzant, Melissa Beard-Blair, Alisia Smith and Aurelia Blake got their groove on at a recent class. The four instructors will lead Latin-inspired dances during a two-hour Zumbathon at 7:30 p.m. on Friday, Nov. 11, with proceeds going to the McKinney School Power of the Pen creative writing team that Blake coaches. (Photo by Megan Bachman)

Shake your booty for good cause

Zumba is exercise in disguise. The fitness classes feel more like a dance party than grueling workout. Already popular in Yellow Springs, the Latin dance-inspired fitness craze will now be used to raise funds as well as burn calories.

At “Zumbathon: Partying by the Springs” on Friday, Nov. 11, money raised from a two-hour Zumba class will go to the McKinney School’s Power of the Pen creative-writing team. The “party” starts at 7:30 p.m. at the Yellow Springs High School gym and costs $10. Four certified Zumba instructors will lead the dancing and snacks and water will be provided.

For certified Zumba instructor and Power of the Pen writing coach Aurelia Blake, the event combines two of her passions.

“In Zumba you get to engage your imagination with physical fitness,” Blake said, while Power of the Pen encourages imaginative storytelling.

“Zumba tricks you into exercising,” said local instructor Melissa Vanzant. “It’s the only exercise program that many people have been able to stick to over the long term.”

Zumba is exercise for the young and old, gym rats and couch potatoes alike.

“[Zumba] is exercise without being exercise,” said Xenia instructor Alisia Smith. “Most people who come to Zumba don’t like exercise.”

Though Zumba is a fitness routine, there’s nothing routine about it. While some exercises are meant to be repetitive, instructors choreograph new songs all the time. Blake, Vanzant, Beard-Blair and Smith, who have been leading Zumba workouts locally, will all share their original choreography at the Zumbathon.

Money raised for the event will support the award-winning writers of McKinney School’s Power of the Pen competitive writing team. Funding will be used to transport and house students who attend the state writing tournament in Columbus. Every year since 2000 at least one Yellow Springs writer has qualified for states.

In a Power of the Pen competition, each team fields six seventh-grade writers and six eighth-grade writers. After receiving a writing prompt, the students have 30 minutes to write a narrative addressing the prompt.

Power of the Pen helps students write more quickly, creatively and clearly, according to Blake. These skills are especially useful for standardized tests like AP exams, the SAT and the Ohio Writing Test. Plus many students will have original writings to submit to the recently re-launched school literary magazine Spectrum. The students also learn how to write imaginative, cohesive narratives, give and receive criticism and gain confidence.

“When we workshop a story, they have to take off their thick skin,” Blake said. “They have to just sit and listen.”

The Power of the Pen team raises some funds from school dances and readings of student work, but not enough to pay for a bus to travel to the state tournament, Blake said. Hopefully, enough Zumba devotees will come out for the workout and the good cause so that every student, whether or not they qualify, can attend the tournament.

“Help out by coming and shaking your booty,” Blake said.